ECB interest rate policy and the profitability of European Banks

In pursuit of its goal of maintaining inflation in the eurozone close to, but under, the 2% target – and with the intent of stimulating the European economy – the ECB has been implementing a loose monetary policy since 2015.

In recent times, given that the growth rate of the EU’s economy is hovering around just 1%, the ECB adopted an even more accommodating stance and lowered rates even further into negative territory (the deposit rate facility now sits at -0,50%) as well as purchasing government and corporate bonds from the secondary market.

Casualties of this loose monetary policy have been European banks, which have seen their profitability decline. Interest rate declines have, in fact, led to lower lending rates being charged to corporate clients; and for banks depositing money with the ECB comes with a cost, given the negative interest rates. Overall, the net interest margin (net interest income – net interest expense) of banks has declined drastically over the years. 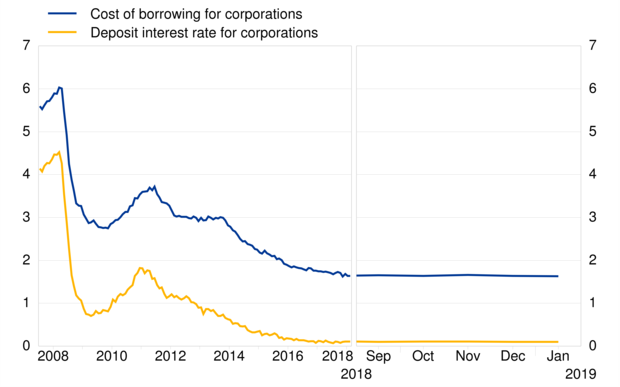 What can banks do to alleviate this decline in profitability? Some of the measures taken have been the following:

The economic crisis that started with the collapse of Lehman Brothers in 2008 has had severe economic consequences and it has taken years for the global economy to recover. A number of European banks collapsed and, in many cases, governments were forced to step in and acquire some while closing others. The central banks played a key role in attempting to stabilize the global economy, mainly through providing liquidity and lowering interest rates.

The accommodating interest rate policy has been positive for the economy and has helped stabilize the corporate sector. Bank profitability, however, has suffered. Banks that survived have adopted a series of measures, described above. By implementing these measures, banks were able to improve their profitability and provide better returns to their shareholders.