On the 12th of November, Private Equity firm Veritas Capital and Hedge Fund Elliott Management announced their intention of buying Athenahealth Inc. [ATHN.O] for $135 per share, valuing the company at about $5.7 billion. The all-cash deal offers a premium of 12.2% with respect to closing price on Friday 9th. After the closing of the deal, Athenahealth will be combined with Virence Health, Veritas’s health-care services company which offers hospitals and physician practice services, to manage their revenue and workflow. The combined company will keep the Athenahealth name, and will be led by Virence Chief Executive Officer Bob Segert.
​ 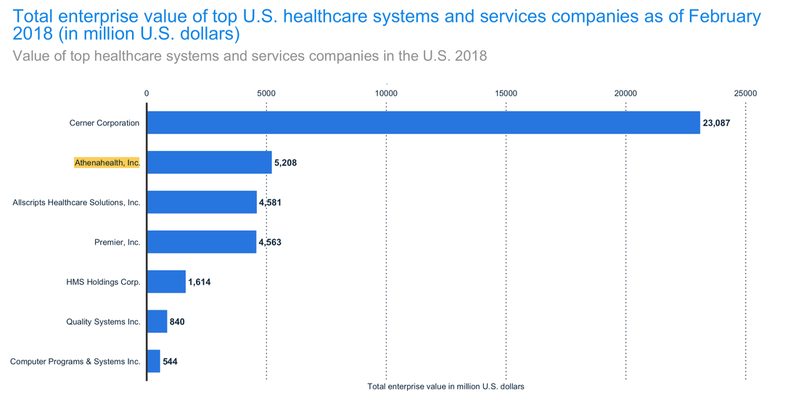 Source: Statista.com
About Elliott Management
Elliott Management Corporation is an American hedge fund, founded in 1977 by Paul Singer, current CEO of the firm, and based in New York City. From inception, Elliott has generated for its investors a 14.6% net compound annual return, compared to 10.9% for the S&P 500 stock index, and now has more than US$34 billion in Assets under Management. As of the first quarter of 2015, Elliott's portfolio is worth over $8 billion.
The hedge fund recently created its own subsidiary private equity firm, Evergreen Coast Capital, to conduct its leveraged buyout transactions. The decision to buy out Athenahealth marks the largest transaction Evergreen has ever handled.

About Veritas Capital
Veritas Capital is a New York-based private-equity firm that specializes in national security, IT and other government-sector investments. It was founded in 1992 and raised its first fund in 1998. Veritas invests exclusively in companies which support the government or government-related commercial customers. It targets specifical sectors, such as Aerospace & Defense, Communications, Education, Energy, Government Services, Healthcare, National Security, and Technology. Since 1998, Veritas has raised six funds, with a total value of over $7.5 billion dollars. During this time, Veritas originated and managed over 70 acquisitions.
With the closing of its sixth fund in 2017, Veritas has approximately $8.8 billion of Assets under Management.

About Athenahealth
Athenahealth is a publicly-traded American company that provides network-enabled services for healthcare and point-of-care mobile apps in the United States. It has a network of more than 114,000 providers and 110 million patients, and offers a suite of services to manage medical records, revenue cycle, patient engagement, care coordination, and population health.
The company was founded in 1997 in San Diego, California, by Jonathan Bush and Todd Park. It was first born as Athena Women's Health, a women's health and birthing center, with the aim of giving "a warm and supportive environment, personal attention and better care to women”. In the early 2000s, Bush and Park decided to close their birthing center and started a medical data company called Athenahealth on the heels of the Internet boom of 1999.
The company grew steadily until 2007, when the Initial Public Offering of its common stock was announced, at a price of $18 per share.
In 2017-2018, under pressure from investor Elliott Management, Athenahealth undertook substantial cost-cutting measures, and Bush resigned. After that, the company agreed to be acquired by a Veritas Capital and Evergreen Coast Capital affiliate for $5.7 billion.
​ 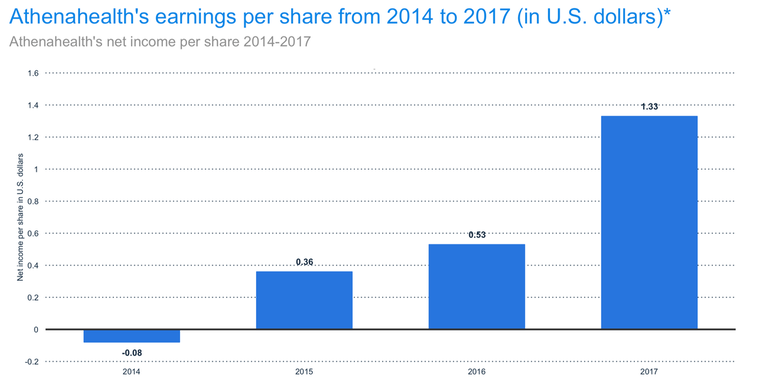 Veritas and Evergreen Coast have agreed to buy Athenahealth for an estimated $5.7 billion in cash. Under the agreement, Athenahealth shareholders will receive $135 cash per share, representing a premium of roughly 12 percent over the company's closing stock price on November 9th, the last trading day before the companies' acquisition announcement.

Following the closing, Athenahealth will merge with Virence Health, the former GE Healthcare unit that Veritas acquired earlier this year for more than $1 billion, the companies said in a joint statement. The combined business is expected to be a leading, privately-held healthcare information technology company with an extensive national provider network of customers and excellent products and solutions to help them cope with an increasingly-complex environment.
The combined company will operate under the Athenahealth brand, and will be led by Virence Chairman and Chief Executive Officer Bob Segert and by a leadership team composed of executives from both companies.

"Athenahealth and Virence have complementary portfolios and highly-talented people, and this combination expands our depth and reach across the continuum of care. I'm looking forward to combining our mission-driven cultures to create an even stronger healthcare IT company", said Bob Segert.

"After a thorough strategic review process, we have decided to enter this agreement, which we believe maximizes value for our shareholders and accelerates our goal to transform healthcare," said Jeff Immelt, Executive Chairman of Athenahealth.

The latest news comes after a good deal of drama. First, Athenahealth rejected an initial take-private offer from Elliott in November 2017. Elliott then made a second proposal in May, offering to buy for a whopping $160 per share, in a transaction that would have valued the business at a reported $6.5 billion. In June, reports emerged that Athenahealth Co-Founder and CEO Jonathan Bush had stepped down after being accused of sexual harassment and other related misconduct, with former General Electric CEO Jeff Immelt joining as executive chairman. As a result, the company agreed to be acquired by Veritas and Elliot for $5.7 billion.

Elliot’s private equity arm, Evergreen Coast Capital, will keep a minority stake in the new company. The transaction is expected to close in the first quarter of 2019, subject to the approval of the holders of a majority of Athenahealth's outstanding shares and the satisfaction of customary closing conditions and regulatory approvals.
​

Source: Yahoo Finance
Market reaction
Overall, the investors’ reaction to the acquisition was positive. On the day of the announcement, Athenahealth stock prices rose 9.5% to around $131.82, and remained stable around this value for the following days. The sale will give Athenahealth the opportunity to leverage expertise in the sector, as well as the capabilities and solutions to provide superior value to customers, and create exciting growth opportunities for employees.


Financial advisors
Lazard and Centerview Partners are acting as Financial Advisors for Athenahealth, while Evergreen Coast Capital is advised by Deutsche Bank and RBC Capital Markets.