Emerging Markets turbulence in Asia: why this time it’s not all about the dollar

While we approach the last month of the year, the time has come for us to take a stock of the Emerging Markets developing situation. In 2018 so far, emerging markets have sold the smallest amount of dollar-denominated debt in six years. Up to October, in fact, EM nations sold $24bn of dollar bonds, according to Refinitiv. It represents the lowest amount since October 2012, and it is down 73 % if compared to the same period in the previous year. 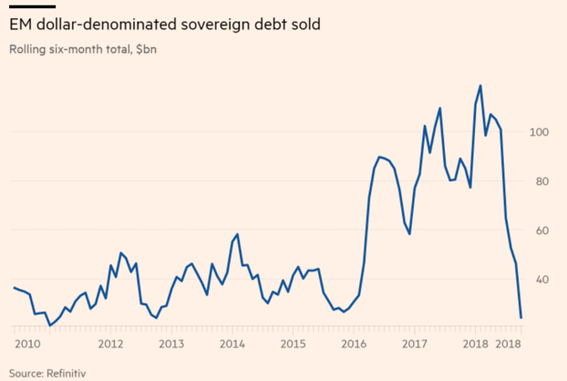 Although this in partly due to the EMs run to issue debt in other foreign currencies different from the greenback, the general sell-offs in EMs started from the April turbulence has deeply influenced the overall level of debt-raising; non-dollar denominated issuance fell over 20% year on year as well. While it is of course widely accepted among emerging market investors that this year’s sell-off in EM assets has been a product of dollar strength, it is still worth to dig deeper in order to separate the cart from the horse.
The sell-off started with the Russian rouble and then followed, among the worst performing big currencies, the Turkish lira, the South African rand and the Brazilian real. The benchmark JPMorgan EM currency index is more than 10% down in the year, as of the beginning of November. Of course, EM currencies have not been the only financial instrument affected, bonds have also been affected. The Bloomberg Barclays EM local currency index is down 6.3 per cent since the beginning of the year. The equivalent dollar bond index has performed slightly better, but it is still down 3.5 %. The falls have left EM debt overall underperforming other risk assets that are popular with EM investors, such as high-yield corporate bonds.
Macro-economically, debt denominated in dollars is increasingly attractive to investors as the dollar strengthens, and it is by contract less valuable for EMs investors in a dollar-devaluation scenario. On the other side, debt priced in local currency terms is more sustainable for the issuer but not as attractive for foreign investors. Having this in mind, it is easier to believe that EM securities have suffered successions of sharp sell-offs since last April. The rising dollar, together with higher interest rates FED policy and tighter lending conditions, sucked money out of EM currencies, bonds and stocks. However, according to some analysts, this is equivalent to put the cart before the horse. Dollar strength, they say, may be correlated with stress in emerging markets without being its cause. Eventually, the cause might be inside Emerging Markets themselves. The casual link of the phenomena matters because we may soon enter a world of apparently opposing forces, which is declining dollar strength (especially as we get closer to the Fed taking a pause on rates), which has traditionally worked well for EM assets, together with slowing global growth, which should certainly have an opposite effect on EMs securities market. “Saying it is all about the dollar is a misrepresentation” says Bernd Berg, global macro and foreign exchange analyst at the Swiss asset management firm Woodman. According to this view, real causes shall be represented by macroeconomic factors over floating currency exchanges. In particular, in the APAC region, eyes on the slowing-growth situation in China and on gathering risk of a trade war between the US and China. He points out that, as shown by the graph below, the sell-off during the summer has been independent on the move in the dollar trend. In fact, while EM currencies were decreasing, the DXY dollar index was not moving sideway between June and September. After that period, while the dollar has risen, EM currencies have remained steady. 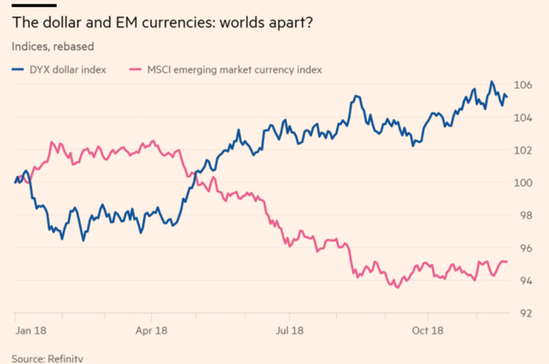 Deputy Head of global macro strategy at UBS Bhanu Baweja goes even further: “If there is one thing that drives the dollar, it is the difference between US growth and growth in the rest of the world,” he says. “So there is correlation rather than causation, and if you say EM is all about the dollar, you are really undervaluing EM’s issues.”
While some analysts believe that EM markets’ conditions will progressively improve, it is important to note that EM economies experienced significant steps down in recent years. This has been caused by the developing nature of consumption and investment in the world, which is changing in a way that does not support growth in emerging economies.
In Asia, China shifted the focus of its economy from investment to consumption, and also the trend inside investment is negatively driving the drift as well. In fact, the percentage of investment composed by sectors like construction, which is highly commodity intense and therefore good for many EM exporters, is decreasing. At the same time, the percentage of investment in sustainable energy (which has been historically not as good for EM exporters) is increasing, thus reinforcing the trend in the same direction. 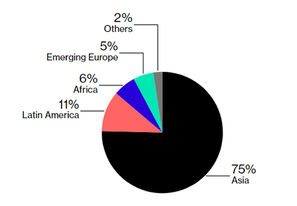 In addition, thanks to its presence in benchmark indexes, Asia is highly exposed when investors opt to dump emerging markets as a class. In fact, Asia dominate the broader emerging-asset universe, especially when it comes to equities. China, South Korea, Taiwan and India account for four of the five biggest weightings in MSCI Inc.’s Emerging Markets Index. Companies based in Asia account for around the 75% alone.
An inescapable result is that the cost of equity (Ke) for EM companies has recently gone up significantly. The ability of Asian countries to support growth would have as much influence on EM assets as any decisions taken by the Fed. This time is not all about the dollar.