On the 16th of January 2017, Essilor, the world leading manufacturer of lenses, and Luxottica, the largest consumer eyewear group, agreed on one of the largest ever European cross-border transactions.

The deal would create a giant in the fast growing €90 billion eyewear industry.
Indeed, the merged group, named EssilorLuxottica, would have a market value of about €50 billion, combined sales of €15 billion and more than 140,000 employees. 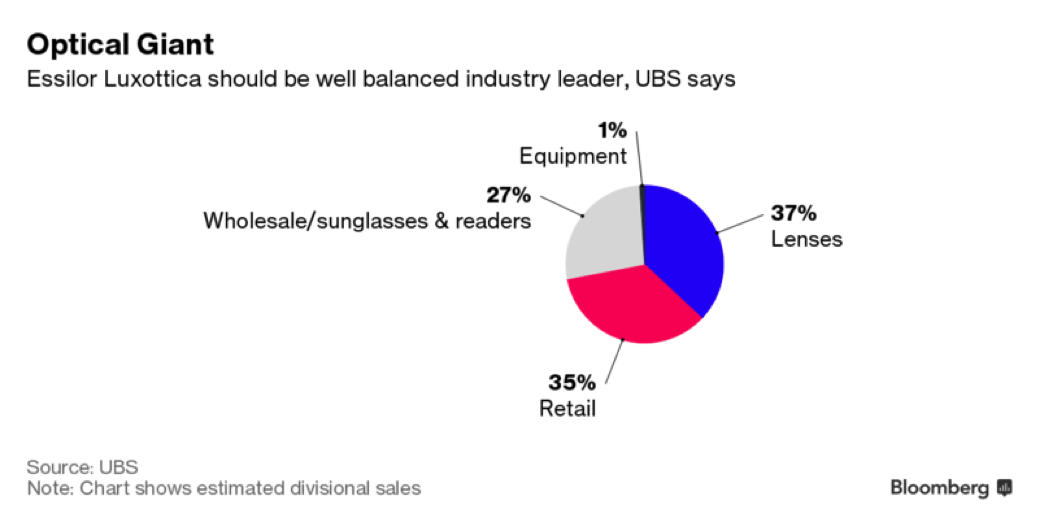 The reasons behind the agreement, clinched between Hubert Sagnières, Essilor’s French-Canadian chairman and chief executive, and Leonardo Del Vecchio, Luxottica’s founder and Italy’s richest man, are several. In the first instance, the merger would be an elegant solution for both companies to grow, since it would represent a union between two complementary businesses, that, according to analysts, could create better value jointly rather than separated. Luca Solca, managing director at Exane BNP Paribas, said the deal “would be excellent news for both stocks”, because it would water down the possibility of enhanced competition between the two, and it could create significant synergies, both in revenues and costs. Namely, an increase in net revenue of €200-300 million per year is forecasted, alongside with a reduction of G&A and purchasing cost of €70–100 million per year and a supply chain optimisation worth €150–200 million per year, due to improved insourcing, logistics and distribution operations.

Secondly, but not less importantly, the merger would solve the governance and succession issues concerning Mr. Del Vecchio, which have hardly hit Luxottica’s shares. In year 2014, the 81-year-old billionaire, leader of the Italian golden generation of entrepreneurs which includes, among the others, figures such as Silvio Berlusconi and Giorgio Armani, has confounded critics by returning at the helm of his business, which he had started in 1961 as a contract manufacturer, based in the mountain town of Agordo, where the company still has a factory. Mr. Del Vecchio, after having clearly stated that he wanted trained professionals to run the company, avoiding the familiar trap of intergenerational strife, appointed Andrea Guerra as CEO of the company in 2004. Despite having covered almost impeccably his role, doubling the revenues of Luxottica to €7.3 billion during the decade in charge, Mr. Guerra resigned, probably as a consequence of the founder’s return to day-to-day management in 2014. This event led in turn to increased uncertainty, with three chief executives alternating themselves in as many years. Luxottica’s share price fell by a quarter in the first ten months of 2016. But it was probably only after a personal grief occurred in September 2016, the demise of Bernardo Caprotti, billionaire founder of Italian market chain Esselunga, and after witnessing the painful family feud that followed from the lack of a designated heir, that Leonardo Del Vecchio resolved himself to revalue his reputation of “formidable dealmaker”, earned through the achievement of complex transactions, such as the audacious acquisitions of Luxottica’s best known brands, including Sunglass Hut and Ray-Ban, which followed the listing of the group in New York and Milan. Indeed, the merger would make Mr. Del Vecchio the largest shareholder of EssilorLuxottica group with 31 per cent of voting rights and, at the same time, would allow him to find in Hubert Sagnières, 61-year-old Essilor’s boss, who would become executive vice-chairman, a ready and suitable heir.

The announcement of the transaction, unsurprisingly, was enthusiastically welcomed by analysts and investors, who saw shares in Essilor jump more than 10 per cent on the news and Luxottica ones soar 8 per cent.

Under the terms of the deal, Delfin, the Del Vecchio family holding company that controls Luxottica, will exchange each of its Luxottica shares for 0.461 of an Essilor one. Essilor will then publicly offer to buy the remaining of Luxottica’s equity at the same exchange rate, consequently delisting the Italian company. In a first instance, the merged group will be listed in Paris, but insiders reveal that the chief aim of Essilor’s leadership would be a fashionable landing on Wall Street stock exchange. The IPO, however, will be planned only after the transaction’s settlement and is subjected to regulatory approval. Curiously, the deal, supervised by two of Europe’s most experienced dealmakers, Luigi de Vecchi, chairman of Citi in the region, and Olivier Pécoux, co-chief executive of Rothschild & Co, was struck following from an intense flow of phone calls among the most exclusive holiday destinations, ranging from Monte Carlo and Verbier to the Caribbean. Future developments, given the premises, pre-announce themselves as exciting.