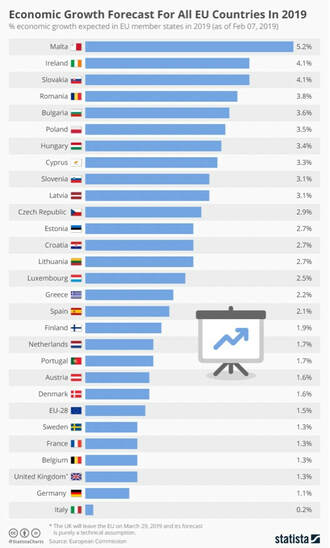 Just a day after its most successful bond sale, Italy has seen its growth forecast drastically reduced by the European Commission. Brussels is now pointing at a 2019 growth estimate of just 0.2 percent, the lowest out of all the European Economies. This is a considerable cut from its previous projection set at 1.2 percent, signaling how recent distress in the southern European country is becoming increasingly concerning for policy makers.

Worries about the state of the Italian economy have been mounting for the past months and have been consistently influencing investors’ sentiment on the market. For instance, this late shift in expectations can be seen when looking at the “Spread”, the difference between 10-year Italian bond (ITAGER10), and the benchmark, 10-year German bond (bund). A high value of said difference has driven record demand for the country’s latest 30-year bond syndication (€41bn of orders).  The security was seen as particularly attractive by those investors seeking the high yield it offered, yield that has risen sharply since the announcement of the cut to growth forecasts. Despite some recent slightly more concessionary policies from the European Central Bank, considering its current state, the outlook for Italy remains fairly grim.


The European Commission has blamed Italy’s populist government for implementing various fiscal policies that have increased uncertainty and borrowing costs, especially damaging has been the prolonged stand-off with Brussels over last years’ spending budget that would have brought the deficit to an ever-increasing 2.4 percent in 2019.


Record emigration and low birth rate have also added to economic fears. Italians are in fact emigrating at record proportions and birth rates have reached the lowest level of the century. Births have dropped to 449.000 and more than 160.000 Italians have moved abroad, the number is likely to be even higher as those who officially register as emigrants lose various national rights such as healthcare benefits. These worsening demographics have added to the pressure on an already sluggish economy troubled by weak finances who might soon find itself lacking the brains and hands to revive itself.


The blame although, seems to extend beyond the current government and Italy itself. The outlook for the whole eurozone has been dimmer in recent months with concerning data coming from Germany where a slowdown due to weaker consumer demand has manifested. The possibility of a hard Brexit and trade tensions between China and the US have also added to the uncertainty, resulting in the Commission cutting its forecasts for the whole eurozone. As briefly explained by EU Commissioner for Economic and Financial Affairs, Taxation and Customs Pierre Moscovici: “After its 2017 peak, the EU economy's deceleration is set to continue in 2019, to growth of 1.5%. This slowdown is set to be more pronounced than expected last autumn, especially in the euro area, due to global trade uncertainties and domestic factors in our largest economies”.


As these recent events have demonstrated there are some changes needed in order to re-establish a healthy economy and keep on track with the rest of European countries. Italy needs first of all to reduce its cost of borrowing to be able to survive in the short term, and then start investing in its future by supporting its young talents and reducing the outflow of human capital. Overall, we can expect a challenging year ahead for both Italy and the Union as a whole, a year where some key events such as Brexit are set to happen that could drastically change the outlook over the global economy.