In January 2022, Microsoft announced a gigantic transaction: the acquisition of Activision Blizzard. This deal would mean an impressive expansion of the big tech company towards the gaming industry. Unfortunately for the software behemoth, the regulators strongly opposed the transaction, declaring that it would harm fair competition in the gaming industry, and leading the EU to declare an “in-depth” investigation of the deal, backed by a harsher and more immediate antitrust reaction than in the US.

​The Deal
The acquisition of Activision Blizzard would be the largest in Microsoft's history at $75 billion, which values the company at $68.7 billion, accounting for $6.37 billion in net cash. Microsoft will pay $95 dollars per share, a 45% premium on the closing price (18th of January 2022). The purchase is the substantial equivalent of eight full quarters of free cash flow and is almost three times larger than the next largest Microsoft acquisition: LinkedIn, acquired in 2016 for $26.2 billion. 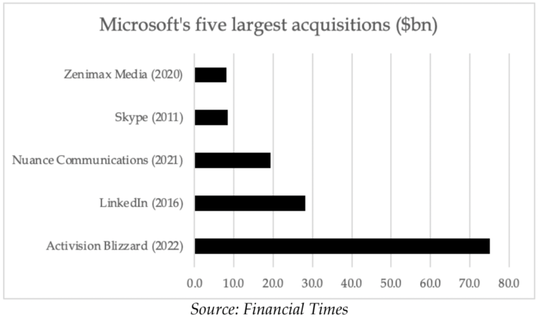 In 2021, Microsoft made the acquisition of Nuance Communications, starting the expansion to software development with a merger. Their latest mega deal represents a step further in this direction. In fact, the big tech company showed its will to regain an important position in the gaming sector, and earn, once again, an important market share which it lost following the decline of the Xbox 360 line-up.

Impact on the Gaming Industry

This merger, according to Microsoft’s CEO, Satya Nadella, will have a positive impact on the gaming industry, granting numerous benefits to players by making more games playable on Xbox as an alternative to other devices, resulting in more choice and more sales for Microsoft. For game creators, the deal would bring a general expansion of the industry, resulting in more ways to reach costumers, further reducing their Customer Acquisition Costs. The combined company would get a head start in developing online gaming communities that would eventually be accessible to billions of people thanks to Activision and Microsoft's extensive internet presence. Together with Microsoft’s 25 million membership subscriptions to Game Pass (a gaming programme), the 400 million active monthly users of Activision titles like Candy Crush would offer the business "one of the largest and most engaged communities in all of entertainment" the CEO claimed.
The revenue synergies aren’t the only reason for the acquisition. It is clear, in fact, that this deal presents large upside potential in a possible future expansion to the Metaverse. Although this Metaverse push is not monetizable in the short term, it could signify a major advantage in the long term, in an industry that will prove to favour the first mover advantage. Only time will tell whether returns are going to be positive, but projections regarding the market size and the profitability of the Metaverse are extraordinary. It is likely that this acquisition is only the first step towards the meta-world and that many others will come.

Microsoft’s growth and large cash reserves built over the past years puts it in an excellent position to move ahead with such a large acquisition. As far as financials are concerned, in Q4 ‘21 (before the announcement of the acquisition), the company exceeded expectations in almost every way. Revenues reached $51.7billion, up 20% from the previous year, demonstrating that corporate spending growth has continued long after the epidemic has ended, as a transition to a more digitalised world persists. In addition to this, Microsoft’s ability to command a price rise in the services offered by Office 365 serves as proof of the resilience of its revenue model.
The decision to acquire Activision represents Nadella's greatest wager since being named CEO in 2014. Despite being the biggest software firm in the world, Microsoft will now trail only China's Tencent and Japan's Sony in terms of revenue following the Activision merger.

The announcement of the merger, given its enormity, attracted the attention of the European Union’s antitrust authorities, which launched an investigation fearing that the deal would distort fair competition in popular gaming titles. The core of the investigation is centred around who gets control of future releases of Call of Duty titles, produced by Activision. A preliminary probe found potential antitrust issues with the distribution of such video games, given Microsoft’s plan to halt access to its rivals, such as Sony’s PlayStation as well as other computer gaming platforms. This could make rival subscription services, such as PlayStation Plus, much less appealing. The opposition of the deal also extends to operating systems. The EU thinks that the deal could restrict competitors to Microsoft’s Windows OS, since computers not using a Windows OS may not have access to Microsoft’s gaming services which include Xbox’s subscription service and an increasing array of games.

One of the EU’s core competencies is the protection of free competition, whereby its law applies directly to all EU member countries, signifying their irrevocability in court. There are two European Parliament committees that deal specifically with antitrust investigations. The Economic and Monetary Affairs (ECON) committee rules on competition as one of its key aims. The Internal Market and Consumer Protection (IMCO) committee includes “identifying and removing potential obstacles to the functioning of the EU single market and promoting and protecting the economic interests of consumers”. The European Council and European Parliament work together to approve competition and consumer protection law, whereas the relevant competition ministers from each country meet during a ‘Competitiveness Council’ to rule on antitrust matters specifically. The European Commission is the main figure in antitrust investigations, as they ensure the correct application of EU competition laws. They can monitor and block actions they consider to be anticompetitive by investigating businesses and holding hearings. Currently, the European Commission is spearheading the antitrust investigation against the Microsoft-Activision deal.

The investigation launched into the Microsoft-Activision deal is one of the many efforts that the European Commission and antitrust watchdogs have done to ensure that Big Tech is not engaging into anticompetitive behaviour. In the past few years, there have been numerous probes launched by European regulators against tech corporations. Among these, many have been targeted at Microsoft and its main rivals. Most notable are the investigations conducted by the EC on Microsoft’s Media Player, and Windows, or Google’s AdSense, Android, and the list goes on, with more and more instances of anticompetitive appearing as these technology companies continue to acquire any potential threats.
All these cases emerge from a common attribute of Big Tech firms – their size. Google, Facebook, Amazon, Apple, and Microsoft can easily restrict access to some goods, manipulate search results, and steer millions of users to specific items on their marketplaces, all the while collecting every piece of information, they can to improve their algorithms. The current dynamic poses a big threat to the privacy and overall wellbeing of an average customer. Even though the legal framework of the European Commission has allowed it to score some big wins against these firms, it still does not offer enough tools to keep up with the rate at which developments are being made in this field. To combat this problem, and consequently bring both regulators and firms to a level playing field, the Commission created the Digital Services and Digital Markets Act.

The Digital Markets Act (DMA) is a set of policies that aims to “comprehensively regulate the gatekeeper power of the largest digital companies” (Brussels, “Digital Markets Act”). This regulatory instrument will be enacted by the end of 2022/early 2023, and it will provide regulators with a rigorous legal basis to ensure a fair digital market. Moreover, the DMA allows the Commission to be proactive in its battle against anti competitiveness and unfair business practices. This ex-ante approach gives EU the advantage it needed to be able to follow the rapid growth of the digital giants. The Digital Markets Act is directly aimed at “gatekeepers” which are to be determined by the following three criteria: a consolidated, impactful position in multiple EU countries, a strong intermediation role, and an entrenched, long-lasting position within its sector.
If a company is classified as a gatekeeper, then it will have to immediately comply with the new regulation, otherwise serious consequences may follow. Fines and sanctions of up to 20% of the world-wide annual turnover may be imposed, and repeated non-compliance can even lead to structural changes, such as divestitures. Some of the biggest do-nots of gatekeepers have systematically appeared in the cases we’ve discussed before, and the vertical integration of Activision poses the same concerns.

With the Digital Markets Act and Digital Services Act, the European Commission makes a great leap towards a fair, regulated digital market, yet simultaneously diverges even more from USA’s antitrust approach.

Antitrust enforcement for Big Tech in Europe and the USA.
There are many differences between the US and EU competition laws, despite their common goal of protecting consumer welfare. European antitrust legislature follows a centralized, top-down approach. US regulations, on the other hand, were built from the bottom-up, emphasizing on the societal impact of a business’ practices, rather than their innate “fairness”. In other words, US regulators will not rush to prosecute a business that engages to some extent in monopolistic practices as long as consumers benefit from the business’ actions. In almost direct opposition lies the de facto approach of the European Commission, that condemns every attempt to eliminate competitors, or leverage their market power to raise prices.
The divergence between these approaches explains why in the case of the vertical integration of Activision, European regulators expressed concerns much earlier than the US authorities, and thus expedited the proceedings into the deal.
Historically, the USA’s anticompetitive practices used to differ in intensity as well. Up until the end of 2019, antitrust policies in the USA were less stringent than their European counterpart. Markets were, to some point, self-regulated, according to the libertarian ideology of Robert Bork of Chicago School of Antitrust. However, after the combined efforts of the DOJ and FTC in the past 3 years, Google, Facebook, Microsoft, and Amazon were thoroughly probed for their monopolistic behaviour. From 2019 to present day, numerous suites were filed against the “market-leading online platforms” by a special FTC task force, DOJ, and dozens of states.

Conclusion
To sum up, Microsoft’s willingness to expand its business toward the gaming industry and the Metaverse will not be so simple. This lawsuit is one of many others previously prosecuted against big tech companies. The size of these firms alarms the regulators at each transaction announcement. Indeed, antitrust issues for competition violations were to be expected for a transaction of such dimensions, above all, in Europe. It is difficult to tell if the EU’s approach based on prevention, which may severely limit the number of deals that are passed, is more beneficial than one based on cure, as is the case in the US, which might create the additional problem of making it more difficult for institutions to retreat a deal after it has gone through.