Eurozone Banks under the Coronavirus threat

Since the 2009 financial crisis, European banks have been putting in place strategies to increase the quality of their assets, writing down and selling billions of “non-performing loans” or NPLs, in which the borrower is likely to default or hasn’t made any scheduled payments for 90 days past due.
The NPL ratio has become a fundamental measure of the quality of bank’s balance sheet and, consequently, of the trustworthiness of the institution.
The European Banking Authority (EBA) recently posted a report showing a weighted average ratio of NPLs equal to 3% in June 2019 (total NPLs for €636B), in comparison with the 6% ratio of 2015. However, this result conceals an uneven distribution among countries and a huge heterogeneity in lending segments. 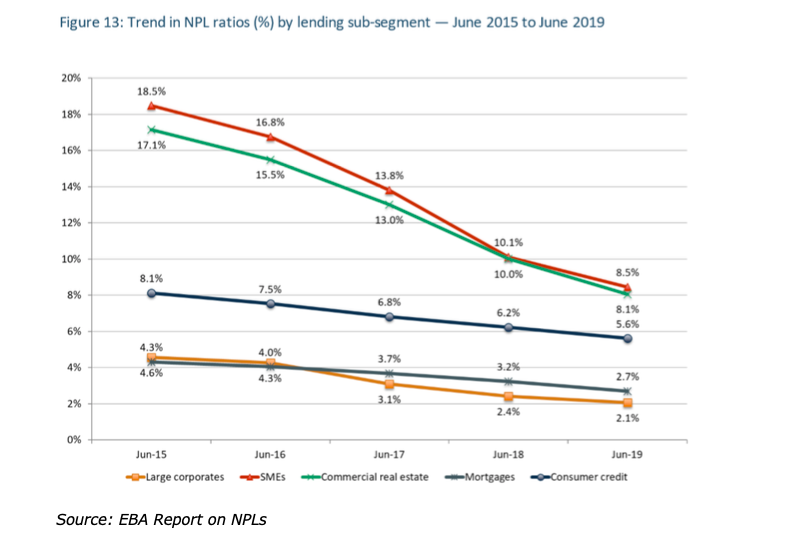 The greatest challenge for European Banks in the Coronavirus scenario is the pressure put on the lending system that despite the current difficulties has to keep credit flowing, which can be granted only through great flexibility. Banks have been allowed to temporarily suspend tracking the payment ability of their borrowers, supporting SMEs in the most affected countries. This new approach to lending could vanish the endeavors underlying several years of restructuring and is looked upon with suspicion by a banking community who was criticized for its excessively generous exposure during the 2009 crisis.
In response, banks are setting up provisions for possible soured loan, a solution that might tackle both sides of the coin (and has been already greeted by U.S. lenders, who set aside $25.4B in 1Q20).
Encouraging this course of action, the ECB has required banks to refrain from dividend payments and share buybacks until October 1st at the earliest, in order to better absorb losses on existing exposures. This operation will provide liquidity for €30B in the euro zone to grant loans for €450B.

UniCredit
The Italian bank has been the first in Europe to put these measures into practice, writing off loans for an amount of €900M, in preparation for an estimated contraction of the eurozone GDP around 13%.
“UniCredit could benefit from clarifying its approach on provisions and has removed uncertainty on the potential extent of the losses,” commented Azzurra Guelfi, analyst at Citigroup. “This is possibly linked with management’s conservative and transparent approach as well as a solid capital level that allows the group to absorb bad debts”.
UniCredit had already postponed the decision on the dividend to October 2020 and withdrawn the authorization for a share buyback of €476 million, in alignment with the ECB request.
On April 22, the Bank updated the calculation of Loans Loss Provisions (LLPs), in coherence with the IFRS9 principle, and valued the Cost of Risk to be about 110 basis points for 1Q20 and around 100-120 bps for FY20. For FY21, UniCredit Group currently expects a CoR of 70-90 bps.
In any case, Unicredit CET1 ratio, a measure of the core capital relative to the risk-weighted assets, above 13% but still below European average of 14.78% (4Q19), looks more than enough to withstand a relatively temporary economic downturn.
While the bank reassured investors on its financial position due to liquidity and strong capital buffers, the CEO Jean Pierre Mustier announced his decision to cut his 2020 salary by 25%, having already renounced the annual bonus.

Credit Suisse
On April 23, Credit Suisse presented its 1Q20 results; once again the tendency proved to be a large increase in provisions for credit losses, topping CHF 568M, from CHF 324M in the whole 2019. The management also announced that further reserves will be set aside during the following quarters, especially in the non-Swiss book and asset management.
The Bank necessarily shows to be related to the events occurring in the EU countries, although it benefits from tax advantages given by the Swiss Government to the financial system. Endeed, this is the main reason behind a net income of CHF 1.3 billion, up 75% year on year.
CFO David Mathers affirmed the bank is taking a conservative and responsible approach, whereas executives put on hold the CHF 1.5B share buyback program until the third quarter, echoing Unicredit’s announcements. Only half of the dividend, for an amount of CHF 0.1388, has been distributed and the remaining part, deliberated in autumn, will be subject to economic conditions, following an explicit request from the Swiss Financial Market Supervisory Authority (FINMA), in explicit alignment with ECB.