The eurozone economy is growing faster than expected in 2019. On April 30, Eurostat published its flash estimate of GDP growth in the first quarter of the year, measuring quarterly GDP growth rate at 0.4%, and a 1.2% annual expansion. This represents a significant acceleration from the 0.2% quarterly growth observed in the last quarter of 2018, and contrasts with previous market expectations of a 0.3% GDP growth.

Much more relevant than documenting the unexpectedly high growth, is digging into the main drivers behind this economic improvement. The substantial growth in the currency area’s GDP “is a testament to the resilience of domestic demand that benefits from a strong labour market, accommodative monetary policy and some fiscal stimulus”, according to Oliver Rakau, economist at Oxford Economics. One must thus understand each one of these factors in order to get a clear picture of why the eurozone economy is growing faster than had been forecasted. In doing so, one may also understand what other impacts these drivers can have on the general economy and on specific sectors, as well as how likely they are to remain strong in the future.

Accommodative Monetary Policy
Amid Brexit negotiations and global trade concerns, the European Central Bank reassured the market in the first quarter of 2019 that interest rates would remain on current levels at least until the end of the year, avoiding possible fears associated with a tighter monetary policy. This renewed dovish tone contrasted with Mr. Draghi’s previous remarks, which had only assured that no rate hikes would be seen before the summer, hinting at a possible ending to the accommodative policy that has characterized the decade in the eurozone. The announcement by the ECB stemmed from a downgrade in its GDP growth and inflation forecasts for this year and the next, mainly due to temporary factors that hurt growth in the last quarter of 2018. The delay in rate rises caused Eurozone equities to see large gains in the first quarter, recovering from the decrease in the end of 2018. Although maintaining rates low is fostering economic growth in the overall economy, it remains a main concern for banks, as the institutions struggle to increase spreads due to a rigid lower bound in deposit rates.

Furthermore, the central bank combined the shift in forward guidance, with the announcement of a third round of cheap funding to financial institutions, through targeted long-term refinancing operations (TLTROs). These were created in 2011 at the peak of the sovereign debt crisis and provide a very useful for banks which have difficulty in keeping deposits and in raising wholesale financing. Extending this policy is, therefore, a way for the ECB to help less stable banks thrive despite the delay in rate rises, targeting especially the institutions in peripheric countries, such as Italy, Spain and Portugal.

Nevertheless, the maintenance of extremely low interest rates in the eurozone remains a main factor in banks’ profitability issues. The central bank has acknowledged this problem, but still decided to delay the rising of interest rates until 2020, for the reasons mentioned above. British asset management firm Schroders called the maintenance of low rates “a clear policy error” by the ECB. The investment manager is forecasting a rate hike in March 2020 and another one in December 2020, comparing to its previous estimate of a rate rise by the end of this summer.

Strong Labour Market
Another main factor leading the surge in GDP in the euro area is the extraordinarily strong labour market. The seasonally adjusted unemployment rate in the eurozone dropped to 7.7% in March 2019 from 8.5% in the same month of the previous year, hitting a 10-year record low. Most importantly, unemployment has been low throughout the entire first quarter compared to the levels seen in 2018, as the chart below illustrates. 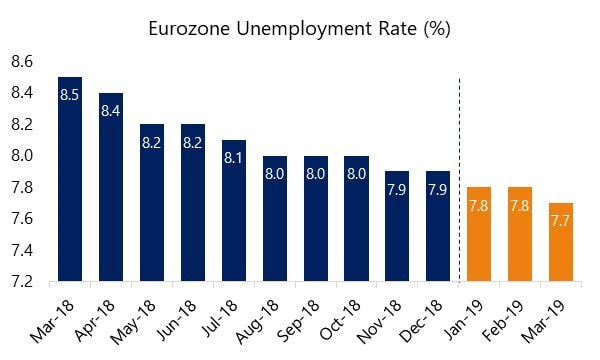 While this level is still substantially larger than the 3.9% registered in the United Kingdom and the 3.8% in the United Sates, due to structural differences in the economic systems, it is the lowest on record since the financial crisis of 2008. However, it is important to keep an eye on the falling unemployment, as this is likely to put pressure on consumer prices, eventually helping inflation reach the close to, but below 2% levels that the ECB has long sought. This, in turn, may give the central bank the confidence to start tightening monetary policy in a not-so-distant future.

Fiscal Stimulus
Economies across the eurozone were also boosted by fiscal stimuli. Fiscal stance in the euro area has loosened from its broadly neutral position in 2018 and is expected to loosen further for the rest of 2019 onwards, as per the European Central Bank’s assessment of March 2019. The main contributions to eurozone’s GDP coming from the fiscal side of things stem from further tax cuts and reductions in contributions to social security, together with higher transfers and “still rather strong expenditure growth”, according to macroeconomists at the ECB. The central bank expects euro area economies to increasingly benefit from a positive fiscal stance for the rest of 2019 and in 2020.

However, this might come at a price. Associated with the fiscal stimulus felt in the currency union, comes a deteriorated deficit outlook, which has worsened from December 2018 projections. A less favourable primary balance together with a lower cyclical component are hurting budget balances, and debt-to-GDP ratio is projected to move in a downward fashion until 2021.

In conclusion, the main drivers of economic growth are, in general, controlled variables. This means that the European Central Bank, together with Governments, is able to adjust policy in order to influence growth in the quarters and years to come. Most importantly, all the variables under consideration in this article are very closely monitored by supervisors and policy makers, and therefore a higher than expected economic growth may, and should, ultimately lead to more cautious monetary and fiscal policies. A record-low unemployment rate, after years of low interest rates combined with quantitative easing, will eventually serve as a sign that the economy does not need stimulus anymore. This shall in turn influence policy makers to adapt a more hawkish position in the near future, aiming to reduce rates and fiscal stimuli. The growth observed in the first quarter of 2019 may thus be the first sign that the ECB has been looking for to tighten monetary policy.