Libra is a cryptocurrency and a payment system created in 2019 by Facebook, whose project and transitions are managed by the Libra Association. In July 2019 the currency source code has been published and the official launch is expected in 2020. The cryptocurrency will be used for peer-to-peer values exchanges but also for transactions and online purchases.

When Facebook announced plans to launch a digital currency earlier this summer, it seemed that it could revolutionize the global finance by creating a digital coin alongside its efforts to bring the world closer together through networks.
Over the past month, that mission has gone badly awry. The Libra cryptocurrency project now faces existential threats from world leaders and central bankers worried about its harmful potential: as a vehicle for money laundering, a threat to global financial stability, open to data privacy abuse, dangerous for consumers and stripping nations of the control of their economies by privatizing the money supply.
​
Lawmakers worry that Libra has the potential to disrupt the monetary system. If Libra becomes the currency for 2.4 billion users, it could become a globally-significant currency or how it is called in crypto markets, a ‘Stablecoin’. It’ll be a pegged currency that maintains, basically, a one to one value with the U.S. dollar. That’s a different model than Bitcoin which trades freely, and its value is determined upon what people are willing to pay for it (as shown by the graph below). 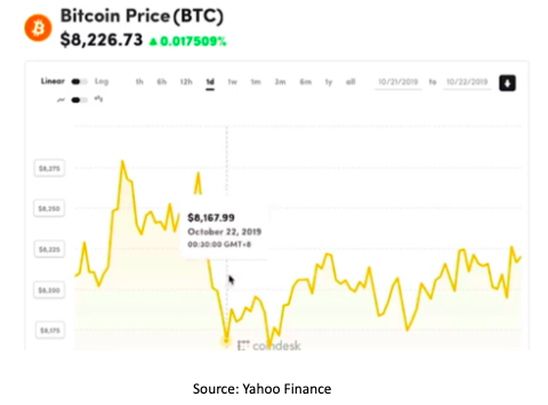 ​Thus, to maintain this peg, the Libra association will keep a dollar reserve. For every dollar’s worth of Libra created, one dollar is going to be put into the reserve. Theoretically, this means that the reserve could hold billions or even trillions of dollars worth currencies and short-term securities that is a very powerful tool in capital markets because if that money got moved around significantly from one currency to another it could absolutely upset global markets.

Actually, Libra represents a potential challenge that the guardians of money have never faced: a global currency they neither control nor manage.
According to what reported by Bloomberg, The European Commission is "currently investigating potential anti-competitive behavior" related to the Libra Association amid concerns that the proposed payment system would unfairly shut out rivals, the EU authority said in a questionnaire sent out to Facebook earlier this month.  In this questionnaire the European commission is seeking clarification about their proposed digital currency. The new perplexities raised by the European Commission go beyond the initial antitrust concerns. The questionnaire has added another layer of scrutiny to the digital currency project that Facebook launched in June.
The Financial Times, citing a copy of the document, said the EU raised concerns over financial stability, money laundering and data privacy risks.
In the questionnaire sent by Bruxelles they also tried to evaluate the effects of the integration of the apps linked to Libra such as WhatsApp and Messenger. Libra Association has announced the creation of a digital wallet for the management of the cryptocurrency also for WhatsApp and Messenger users of. The survey focuses on the composition and governance of the Libra Association.

The great escape from Libra: everyone runs away from the Facebook cryptocurrency
The great escape from Libra has begun. A few days after the board’s appointment, the Facebook cryptocurrency loses pieces. One by one, the main partners of the project are abandoning the ship. After the announcement of Paypal, in fact, even eBay, Visa, Mastercard, Stripe and Mercado Pago slipped away from the project, announcing more or less officially, that they do not want to join the Libra Association.
A remarkable failure, in short, for the creature of Zuckerberg, on the eve of a very important moment for its future. On Monday 14 October, in fact, the first official meeting of the association and the appointment of the members of the board of directors was scheduled in Geneva. A week later, on October 23, Mark Zuckerberg appeared in front of the Financial Services Committee of the United States House, where Libra was at the centre of discussions.

Will this project revolutionize the global payment method or end up in a resounding failure?