FCA-PSA: a merger that could disrupt the automotive industry

A few months ago, FCA was in talks with Renault regarding a possible merger. Negotiations between the two car makers, however, ended in June. Today, FCA is eyeing a merger with a different partner: PSA. This new deal, which appears more solid than the previous one, could give birth to the fourth largest carmaker in the world. PSA is assisted by Mediobanca and Morgan Stanley, while FCA counts on the support of Goldman Sachs. Furthermore, Exor, the holding property of the Agnelli family - which controls FCA - is assisted by Lazard.

On October 30, the market welcomed the first official communication about the possible merger: FCA’s stock rose 9.53% and Peugeot’s rose 4.53%.
Analysts from Equita estimate the deal would bring about €4 billion in gross savings. Moreover, they underline that this merger would be coherent also from a geographical point of view since, while FCA is a leader in the North America market, PSA is stronger in the rest of the world.

Remembering what happened with Renault, we must say that this may not be a marriage made in heaven. Therefore, it is good to highlight that there are many elements of political uncertainty. As a matter of fact, Exor accused the French Government (who owns 12.2% of PSA and 15% of Renault) for the failed FCA-Renault merger. The French Government’s participation is not the only problem. In fact, Dongfeng, a Chinese-owned motor company, owns 12,3% of PSA. This fact, now more than ever, could be an obstacle to the merger since, as we remember, two years ago Donald Trump opposed the acquisition of Jeep by a Chinese company.
However, as stated by French Government’s Ministry of Economic Affairs, this merger would generate the fourth biggest automotive company of the entire world with almost 9 million of vehicles sold per year, disrupting the current balance.
Actually, there are two leaders fighting for the first place, Volkswagen and Toyota, both with more than 10 mln car sold each. However, FCA-PSA could undermine their position and maybe, engaging a Chinese company, bring the competition to another level: 15 mln vehicles.

Units produced in the period between Jan-July 2019 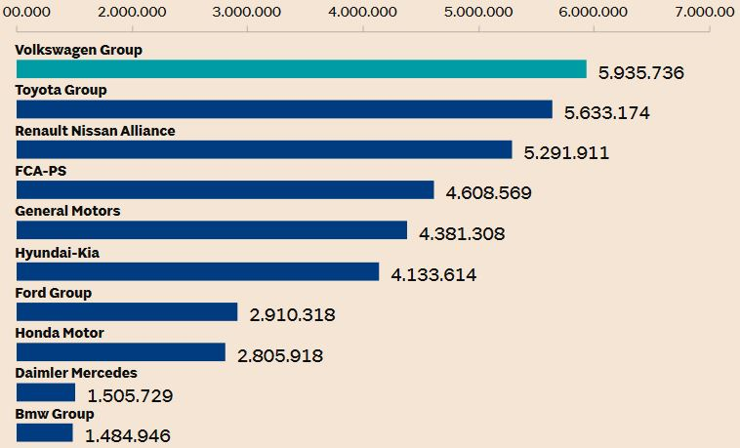 Furthermore, the two companies are considering distributing dividends amounting to about €5.5 bln for FCA and €2.7 bln for PSA (selling its participation in Fareucia). This operation is meant to modify the valuation of the companies, in order to eliminate the understatement of FCA’s capitalization over PSA and bring the P/E ratio of the two companies to similar values.
Moreover, rumours say that a merger of equals has been taken in consideration and that they are already deciding about a new Board of Directors and the new holding. The Board, with Carlo Tavares as CEO and John Elkann as president, will be made of 5 members from each company. The holding, headquartered in the Netherlands, will be listed on the NYSE, Euronext and Borsa Italiana.

Besides the numbers, since we are talking about a merger, it is necessary to analyse which are the reasons that are bringing FCA and PSA to this decision and the synergies that could arise after the deal.

Today, in the automotive business, car platforms have proven to be a key factor in the global competition, since through them a company can build a great variety of cars that differ from each other for almost any feature, even the powertrain system.
PSA has two platforms: Cmp (Common modular platform) and Emp2 (Efficient modular platform 2). Cmp, the latest platform developed by the French company, is a multipower platform suited for small size cars, such as Opel Corsa and Peugeot 208. Emp2 is older than Cmp and it was designed in 2013. However, it is still used today mainly for the medium and big size cars of PSA.
On the other hand, FCA has many platforms but not so modern, so the merger could bring with itself a new and modern base useful to develop new models.

While platforms are extremely important, they are not the only reason for the merger. In fact, PSA could benefit from the acquisition of premium brands such as Maserati and Alfa Romeo that could make her competitive in the luxury sector. FCA, instead, would have access to electric and hybrid powertrain, a field so far ignored where the group is behind almost any other company.
Furthermore, the merger could give the two groups the strength to compete in the Chinese market, were today their business is nearly insignificant.

There are many other sides of the merger that could be analysed deeper, however, as John Elkann said, the merger has just been announced and it still need maybe a long time to be completed. As a matter of fact, a deal of this size that involves many stakeholders is easy to be influenced and even stopped by events of any kind. For example, few days ago, General Motors took legal action against FCA, accusing it of corruption of representatives of the United Auto Workers (UAW). This event could have disastrous consequences on the deal. While, GM says that the legal action does not involve the FCA-PSA deal and that it is not their intention to oppose to it, FCA accused them of trying to derail the merger. It remains the fact that this negotiation is extremely delicate, and we still must consider it a wild card.

Editor’s note: As of December 18th, the two companies have formally agreed to merge. The operation is expected to be completed by Q1 2021.