Ferretti chooses China for its IPO

If there was one market that had an interesting IPO situation over the last two years, it would without a doubt have to be China. After the halting of Antpay’s IPO by the Chinese government over concerns about credit lending and the overall theme of curtailing large tech companies, we have seen a massive shift in the outlook of Chinese capital markets and from the government's purview. In 2021, IPOs in Hong Kong only raised $21 billion dollars, down 10% compared to a month ago according to financial times. This has placed the exchange as one of the worst-performing stock exchanges globally this year and has decreased the share price of HKEX by 28%, just behind Moscow’s stock exchange share price. The initial expectations of Hong Kong benefitting from US clampdowns by Chinese authorities soon faded away as scraped IPOs occurred across many markets for Chinese companies. High-profile IPOs like Didi, Antpay, and Cloud Village all got ditched after crackdowns and only have recently been able to IPO again. After Didi’s IPO in New York got scrapped, Chinese regulators introduced new tougher laws pertaining to foreign listings in an effort to reduce the foreign influence, which led to all US listings from mainland China being halted. Tough conditions and tensions between Beijing and US have also trickled into the Hong Kong market, where investors' appetite has lessened for Chinese firms and has resulted in some of the largest devaluations for Chinese firms in recent years. 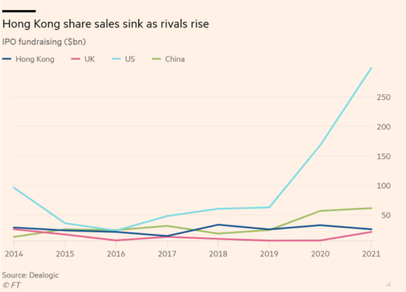 Source: FT
With these challenges at hand, Hong Kong has made attempts to become more attractive and equitable for companies. One of the new proposals was a requirement to have a female board member for listed companies from July 1st of 2021 onwards, and for all companies to have at least one female board member by 2024. There’s also been a push to permit SPAC IPOs although with strict investor protection where only institutional investors can buy in and other restrictions such as a minimum IPO fundraise of $1 billion. Lastly, there were amendments made to the listing rules that provide for more optionality in undertaking secondary or dual primary listings in the HKEX. Companies are now permitted to have a secondary listing in the exchange regardless if their business is considered “innovative” or not, previously a rule implemented mainly for Greater China companies but also affected overseas. In regards to the dual primary listing, there are now lifts on restrictions for overseas companies with weighted voting rights who aren’t from the mainland to be able to perform such IPO even if their structure doesn’t exactly meet HKEX’s requirements. Nevertheless, the Hong Kong exchange still faces pervasive issues and will need to prove that it can still be the place for successful IPOs without facing heavy discounts.
With the presented market conditions, it is quite interesting that out of all companies, Ferretti, an Italian shipbuilding firm, decided to IPO in Hong Kong amidst ongoing tensions. The Hong Kong stock exchange has long marketed itself as a bridge between West and East, enabling Chinese firms to raise foreign capital and for foreign firms to raise Chinese capital, of which the latter applies to Ferretti. Additionally, with difficult macroeconomic conditions given the ongoing pandemic, inflation, and rising interest rates, the expectations look grim due to secular headwinds. The question then remains, will Ferretti be affected by the macroeconomic, political, and financial conditions of Hong Kong and global, or will Ferretti be the key to reviving their capital markets while leveraging oncoming equity from China?


The Offering
​
Ferretti Group is an Italian multinational shipbuilding company, founded in 1968 by Alessandro Ferretti and Norberto Ferretti. Ferretti is a leader in the global luxury yacht industry with a sales presence in more than 70 countries and regions in EMEA, AMAS, and APAC, a long heritage, and a portfolio of iconic brands. In 2012 the Chinese multinational company Weichai Group bought a controlling 86 percent stake. An 11 percent holding was bought by Piero Ferrari in 2016.
The company is experiencing a period of growth after the restrictions of the pandemic, with net revenue increasing 67.5% from €399.6mln for the nine months ended September 2020 to €669.3 for the nine months ended September 2021. EBITDA values confirm this trend: from values around €50k before the pandemic and €26.171k in 2020, to €85.538k at the end of September 2021.
In 2019 Ferretti Group planned an IPO in Milan, but it failed because of the share price, which was considered too low by the company. On March 25, 2022, the company was listed on the Hong Kong stock exchange. Ferretti IPO is the first European listing after Russia’s invasion of Ukraine. The timing seemed risky, with the Russian oligarchs’ mega yachts coming under scrutiny. Yet, they represent less than 10 percent of the total sales and only 3 percent of revenues will be lost because of the sanctions on Russia.  Anyway, the CEO Alberto Galassi said the listing could no longer be put off, with the target of substantial growth and investors’ will to expand the company's range of customers, through an increase in yacht dimensions and a strengthening of after-sales services. Thus, despite knowing that the IPO market is not working properly right now and the company is worth more than the IPO value, they still preferred listing and relying on investors and their ability to understand the real value of the company.
Ferretti Group sold 83.58 million shares, which is around 25% of its total equity capital. A 15% greenshoe option was also part of the offer. The price range was from HK$21.82 to HK$28.84, valuing the company up to €1.2bn. The global offering included two parts: the Hong Kong offering and the International one. The company initially offered 8.35 million Hong Kong offered shares, which represented 10% of the total number of shares offered and 2.5% of the company-issued capital. The Hong Kong offering portion was 1.07 times oversubscribed. Under the international offering, the number of initially offered shares was 75.222 million, representing 90% of the global offered shares and 22.5% of the company-issued capital. The international offering was 2.06 times oversubscribed. The company has priced its shares at HK$22.88 each (€2.66), which is at the low end of its
proposed range, raising HK$1.9bn (€206 mn) and valuing the company €890bn. The stock traded as high as HK$23.15 and then closed 0.1% lower than the initial price at HK$22.85. These values are significantly higher than the ones that the company would have reached if being listed in Milan in 2019.
Chinese firms Sunshine Insurance, Sanya Development Holdings, Hainan Free Trade Port Fund, Hainan Financial Holdings, and Haifa Holding acted as cornerstone investors taking 53% of the offering. In general, Asian investors made up roughly 70% of the total of the IPO. Under the terms of the Hong Kong Underwriting Agreement, the Hong Kong public offering is fully underwritten by the Hong Kong Underwriters; indeed, China International Capital Corporation (CICC) is the sole sponsor of Ferretti IPO. CICC is also one of the global coordinators of the operation, alongside BNP Paribas and Intesa Sanpaolo.

Lastly, to better analyze Ferretti's IPO, here’s a relative valuation of the company made through a comparison of the main multiples of the industry of the international yacht market.

In this relative valuation, we compared the main three multiples of EV/Sales, EV/EBITDA, and P/E of the main competitors of Ferretti Group and similar firms operating in the same industry.

From the table above we can see the median of the three multiples taken in consideration, those numbers were then used to get our Enterprise Value and Equity Value of Ferretti. More precisely, for the Enterprise Value, we multiplied by 1.29x the Sales, getting an EV of the group of HK$10,661.3m. Then, we did the same but with the EBITDA, reaching a smaller EV of HK$9,361.9, this is because of a smaller median multiple compared to the one of Ferretti itself (10.57x vs 11.15x). Subtracting from the two Enterprise Values found the Net Debt of HK$1,243.2, we got the Equity Value of the company. Lastly, by dividing these two numbers by the diluted number of shares, we got the implied price per share. The average of these two targets gives us a price similar to the one Ferretti is trading right now and more importantly similar to the one the company had at the IPO.

On the other hand, for the only equity multiple we took into consideration, we got a smaller Equity Value: multiplying the Net Income of Ferretti by the median multiple of 14.38x we had an Equity Value of HK$2,798m, which is a third compared to the values we got with the other two before. We can explain this by just looking at the huge difference between the median P/E ratio of the comparable and the P/E ratio of the Ferretti Group. The company, in fact, has such a large multiple because of its low net income in 2020 which led to a P/E of 44.36x. Nevertheless, dividing the Equity Value by the diluted number of shares, the target price found is 8.4, which added to the average of the previous two, led us to an average price per share lower than the actual one and the one of the IPO of the company. This points out how much, such a change in only one variable can lead to a completely different outcome on the valuation of a company through a multiple analysis.
For this reason, we ended up taking in consideration only the Equity Values we found with the Enterprise Value multiples.
​

At first glance, it might seem that listing in Hong Kong was not a great move for Ferretti. Regarding the governance, Ferretti will have to combine eastern and western shareholders and will be heavily participated by the Chinese government. Moreover, Hong Kong has been one of the worst-performing stock exchanges in the recent past and valuations have been underperforming other stock markets. However, the need for listings for Hong Kong has resulted in many incentives, in particular advertising, and as the multiples valuation showed, the company was actually fairly priced with respect to its peers. Moreover, this choice makes sense from a strategic perspective and will allow Ferretti to gain easier access to the Chinese luxury market for its yachts.