Fintechs and Banks:
​to fight or not to fight?

The advent of financial technology companies and its implications are at the centre of the discussions surrounding the banking sector. Not long ago, on November the 15th, our association organized a conference dedicated to this subject and the publishing group “Il Sole 24 Ore” in the “14th Annual of Economics and Finance”, which took place on the 28th of November, dealt specifically with the digital disruption in the financial sector.

Having attended both events, I will take stock of different opinions of some professionals of the industry. On the one hand, there are no doubts on whether fintechs will thrive and consolidate in the upcoming years. In fact, not only is it over a decade now since the first wave of start-ups of this sector was first born, but lots of them are also long past the experimental phase.
The key objective is then to understand which role will these companies adopt within the banking sector: will they declare war to traditional banks, or will collaborative strategies end up being a mutually beneficial alternative to direct competition?

Traditional, well-established banks saw the arrival of fintech companies as a major threat to the heart of the industry. To confirm these fears, Goldman Sachs forecasts that the total amount of revenues “stolen” from banks by fintechs will reach 4.7 trillion in the coming years. Nevertheless, these astonishing figures - approximately equal to the sum of the GDP of France and Great Britain - are still a long way from being fulfilled, if we consider the relatively narrow market share that these companies enjoy for the time being.
However, these projections show that fintechs apparently seem to place themselves in a position of profits erosion vis-à-vis traditional banks. This is true for those fintechs, generally referred to as fintech fins, that work directly with consumers and focus mainly on peer-to-peer and online lending. Historically, the online lenders attracted the most funding (42%) and undoubtedly in this segment there’s no other viable way than direct competition with banks.

Notwithstanding this, venture capital funding for fintech fins has dropped sharply in 2016, down more than 50% in 2016 from 2015 both in Europe and in the US. This unstable investment climate is explained by the difficulties that fintechs fins are facing to become profitable - in 2016 40-50% of them report negative EBIT. In addition, these businesses have spent heavily to sustain customer acquisition rate and their marketing expenses often reach 50 percent of their overall operating expenses.
​
Capital, reliability and clients. These are the main elements that fintech fins lack and that banks have in abundance. We see that here there’s a door opened not for competition but for cooperation with banks: this is precisely what another category of companies, the so called fintech-tech, is doing. Fintech-techs basically adopt a business-to-business approach and concentrate on providing specialized technologies for banks. The first ones date back to the 80s, but they have been largely incremented in recent years. Even though they make less headlines than more innovative fintech fins, according to a research of Accenture on mainly European fintechs, not only are they more profitable but they are also growing more. (1) 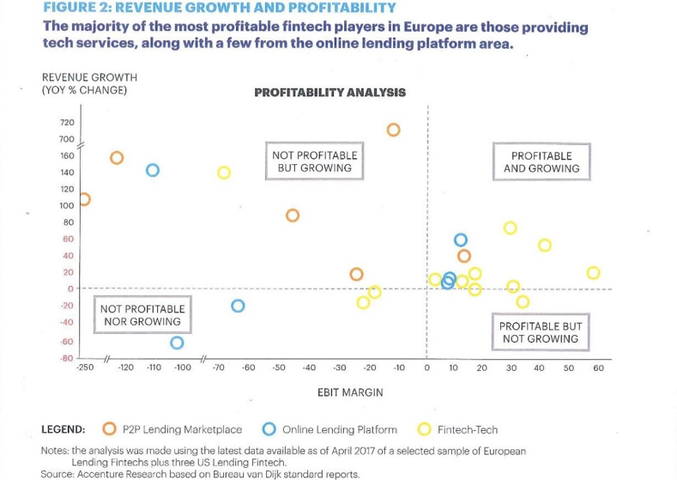 If at this stage fintechs have a lot to gain from cooperation with banks, it is also easy to imagine, in turn, how many areas of a bank can be improved with the technology brought by fintechs, and this is already underway. The innovative force of these companies impacts strongly the value chain of banks through enhanced customer acquisition, better pricing accuracy, lower cost of risk and so forth.
Banks have had problems to keep the pace with the evolution of technology and look vulnerable under this point of view. Fintechs, on the other side, have made huge steps forward but they’re still facing considerable hurdles linked mainly to reliability and capitalization issues. The time is propitious not for war, but for collaborative strategies that can lead to better outcomes for both players.