Flows into Egyptian Debt: are investors still attracted by the market?

In the most recent period, the role and the popularity of the Egyptian market has been subjected to many debates. Debt investors from all over the world are attracted by the high Egyptian yields in a zero-rates economic environment and, since the end of 2016, they have been piling into the Middle East emerging market.

During last month, the country was hit by protests due to corruption and improper use of public funds by the army. Every rumor has been disproved by the President Abdel-Fattah al-Sisi and approximately 3,000 people have been arrested. However, the social turmoil does not seem to have seriously affected investor’s inclination towards the country. Economists don’t expect significant fluctuation in the exchange rate and yields remain attractive even though the country’s central bank decreased interest rates by 250 basis points. Furthermore, analysts say that a considerable part of the $800 million pulled off during October are expected to return by
early 2020.
​
The major reason why Egypt continues to be well-liked in comparison to other high yield emerging markets is
that it is relatively more stable from a macroeconomic point of view.
The chart below proves what said before. According to data the Egypt’s economy is the strongest in the Middle
East, with a stronger and sounder both past and expected growth. In fact, in the past fiscal year the economy
grew by 5.6 per cent and has been acclaimed for its prominent success by the International Monetary Fund. 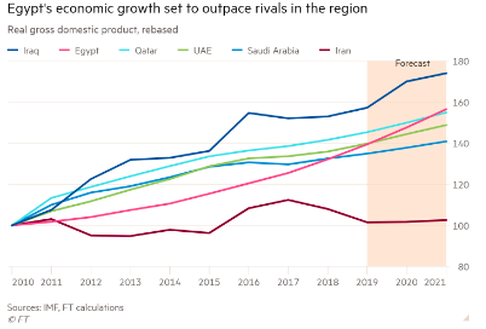 ​
​Important reforms are being implemented and the budget deficit, which already dropped from 9.8 per cent to 8.2 per cent, is predicted to fall further thanks to debt issued. In addition, looking at reserves we can see an increase of $30bn in the last three years reaching almost $45bn in September 2019.
The immediate consequence of such results is shown by the graph below, which graphs the level of foreign investments in Middle East where, excluding United Arab Emirates, Egypt is the country that attracts the larger share, followed by Saudi Arabia, Morocco and Lebanon. 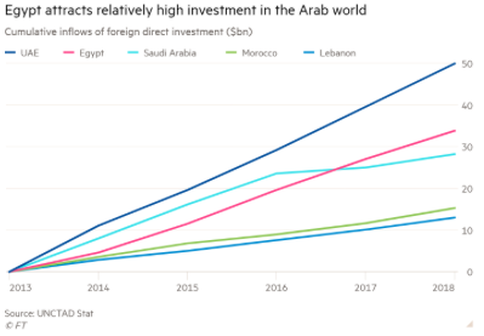 However when considering an investment in Egypt one should pay attention to the potential downside, which is quite consistent given the massive public debt. This is the reason why the government has the ambition to decrease the debt to GDP ratio to 82% from 90.5% by June 2020, end of the next fiscal year. The interest bill remains one of the main expenditures of the government budget, nearly 36% the annual spending.
Despite the inflows of hot money from external buyers, Egypt has not been able to attract much foreign direct investment aside from few sectors, among which the most important is oil and gas. Indeed, data show a clear negative path: the country is struggling to increase non oil- related exports and the domestic consumer demand is modest, far away from the level reached before 2016 when the currency rate started a steep downward trend . Egyptians’ purchasing power has been reduced by a third as a consequence of the severe inflation. In addition, due to structural impediments, private sector-led growth is having several difficulties to improve and become significant.
Investors have different concerns depending on short or long-term instruments. Short term investors must worry about the present political instability and the possible fluctuation of the exchange rate. There is also another problem, which is the relationship between the government and the IMF after the end of the month of November when the current programme with IMF will be terminated. In November 2016, the country signed a three-year IMF programme with improved fiscal discipline and a cheap pound. By contrast, long term investors are worried about the debt level and the ability of the country to repay it. According to analysts, the principal reason why investors are moving into long-term bonds is the possibility of a further cut of interest rates, after the recent easing. For now, 25% of investments is made by long-maturity bonds.
In the beginning of October, Mohamed Maait, the Egyptian finance minister, announced that the country will raise the share of longer-dated debt to 40 per cent of its annual domestic issuance by the end of the current fiscal year. This is because as inflation and interest rates fall, the aim is to extend the maturity of country’s debt.
In conclusion, what we can see is that, despite several treats, investors are not leaving Egypt. They are instead changing their strategy looking for higher duration investments that can take advantage of further cuts of interest rates and lower inflation.