From the Golden Horde to the copper crisis: the sunset of the Mongolian dream

Mongolia is a resource-rich country landlocked between Russia and China, in past years it experienced a spectacular growth especially thanks to China hunger of raw materials to sustain its double-digit GDP growth. Despite its vast plains, Mongolia only has around 3 million inhabitants and a very small economy producing a GDP of $12 billion.

During 2011-2014 Mongolia experienced a YoY GDP growth well above 5% with a peak of 18% in 2012, right after the 2008 financial crisis commodities’ prices skyrocketed in new super-cycle thanks to China 12% GDP growth, such a massive growth required huge quantities of copper which is the most abundant resources of the country. Furthermore, crisis’ effects such as an increase in risk aversion and central banks’ aggressive monetary policies ignited gold prices dramatically increasing mining investments in gold-rich countries like Mongolia.

Analysts estimate Mongolia’s natural resources total value between $1 trillion and $3 trillion, also Government mining permissions are incredibly easy to obtain and transportation costs to China are incomparable to any other country. Mongolia has been one of the world’s fastest growing countries for years mainly thanks to huge foreign investments in mining operations peaked around $4 billion a year in 2011-2012. Now you might think that $4.45 billion investments are not so relevant but if you compare them to GDP you will find out that it is a shocking 37% mining investments/GDP ratio. In 2010 Mongolian tugrik currency rose more than 15% on the dollar due to country’s spectacular growth. 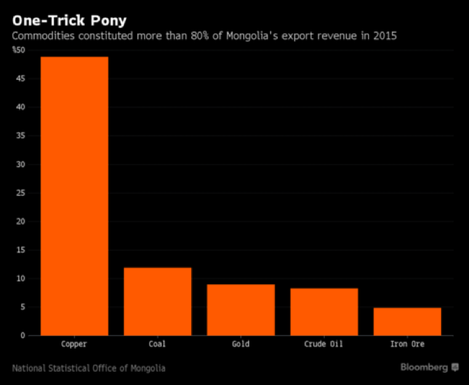 Countries like Brazil, Venezuela and Mongolia faced a huge investments outflow sending them into recession or heavily compromising their growth path. Mongolia is one the most hit countries during the melting of commodity markets and maybe only Venezuela’s economy tanked more due to government internal tensions. Mining investments in Mongolia dried up to almost 0 in past 2 years and an outflow of $4 billion is expected in 2016. 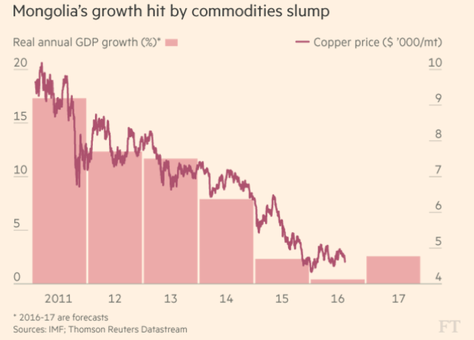 Mongolia is now facing a balance of payments pressures and the national currency, the tugrik, is one of the worst performing currency this year falling more than 15% on the dollar from around 2000 Tugrik per dollar of early 2016 to more than 2316 Tugrik yesterday. The Central Bank recently rose interest rose by 450 basis point in a day desperately trying to stabilize, without success, the tanking currency. During its attempts to save the tugrik Bank of Mongolia already burned more than half of its foreign currency reserves dropped to around only $1 billion. 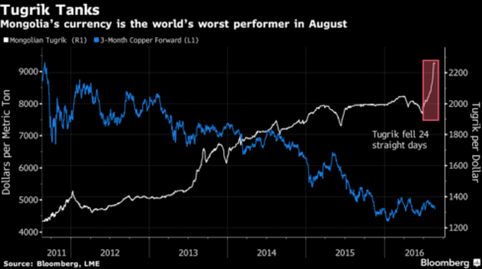 Mongolia has a debt/GDP ratio of 78% and has been recently downgraded by S&P Ratings to B which means “highly speculative” due to the tanking tugrik and rising fears of economic meltdown. National debt in hard currency now amounts at $3 billion, a shocking 25% ratio to GDP.

The combination of all these adverse events are leading Mongolia’s government to seek IMF help trough rescue loans to support economy and face balance of payments issues. Government deficit doubled this year to $826 million and Mongolia must face more than $1 billion in debt repayments in next two years, analysts say that Mongolia could open a debt restructuring operation during next months. An IMF delegation is now in the capital meeting government officials including the prime minister Jargaltulgyn Erdenebat trying to find an agreement to save the country from complete collapse. Heavy spending cuts and salary reductions are already in place, also Mongolia’s Olympic team in Rio faced budget cuts. But concerns about Mongolia solvency are rising and there are already voices of an imminent bailout.

The recent little re-igniting of commodities prices seems not to help Mongolia as its spiral to default is almost irreversible without a huge help from the IMF. Many companies closed their offices in Ulaanbaatar as government still owes them money for infrastructures projects. Rio Tinto recently ended a two-year dispute with the government concerning permissions to operate Oyu Tolgoi mine, one of the biggest in the country, and the government had to repay $70 million to canadian company Khan Resources as a compensation for lost mining concessions.

We will see soon if the IMF will save Mongolia from its dark fate or not. But if we think about Mongolia’s greatness of the past under Genghis Khan, when it was the center of one the biggest empires ever existed, who is now printed on the back of the almost valueless banknotes we cannot feel a sense of sadness.