Fumio Kishida, Japan's new Prime Minister. Is this the end of Abenomics?

While the Japanese stock market is reaching 30 year highs following the pandemic recovery, Fumio Kishida has been elected as Japan’s new Prime Minister on October 4th 2021. In the following paragraphs we analyze the impact that this election could have on the world’s 3rd economy by defining the characteristics of the Japanese economy as well as the stock market’s specific features trying to come up with possible outlooks on the future of Japan.
​
Characteristics of Japanese real economy and the Abenomics
​
The Japanese economic system has a peculiar history: after the “economic miracle” happened between II World War and the 90s, Japan saw a period of stagnation which it struggled to recover from. The government tried to tackle deflation with a strategy of massive quantitative easing, but with little result. A new push for growth was given by the policy of the prime minister (2012-2020) Shinzo Abe, who put up the plan called Abenomics. This economic plan was based on three pillars: “bold monetary policy, flexible fiscal policy and a growth strategy”.

Actually, it consisted in:
After and during the Covid-19 pandemic, Yoshihide Suga - successor of Abe from 2020 to 2021 and former chief cabinet secretary- pledged to continue the economic policy of his predecessor but struggled to manage the emergency.

Looking at the data we see that average wages are fluctuating around the value of 38,500 $ per year and decreased by 1% because of the pandemic. Government spending remained at 38,7% of GDP and that interest rates are still very low (0,1% in the long term, and -0,1% in the short term). The employment rate lost 1% during the pandemic, but quickly got back to 77,9% and the unemployment rate has always been very low: currently 2,80%. 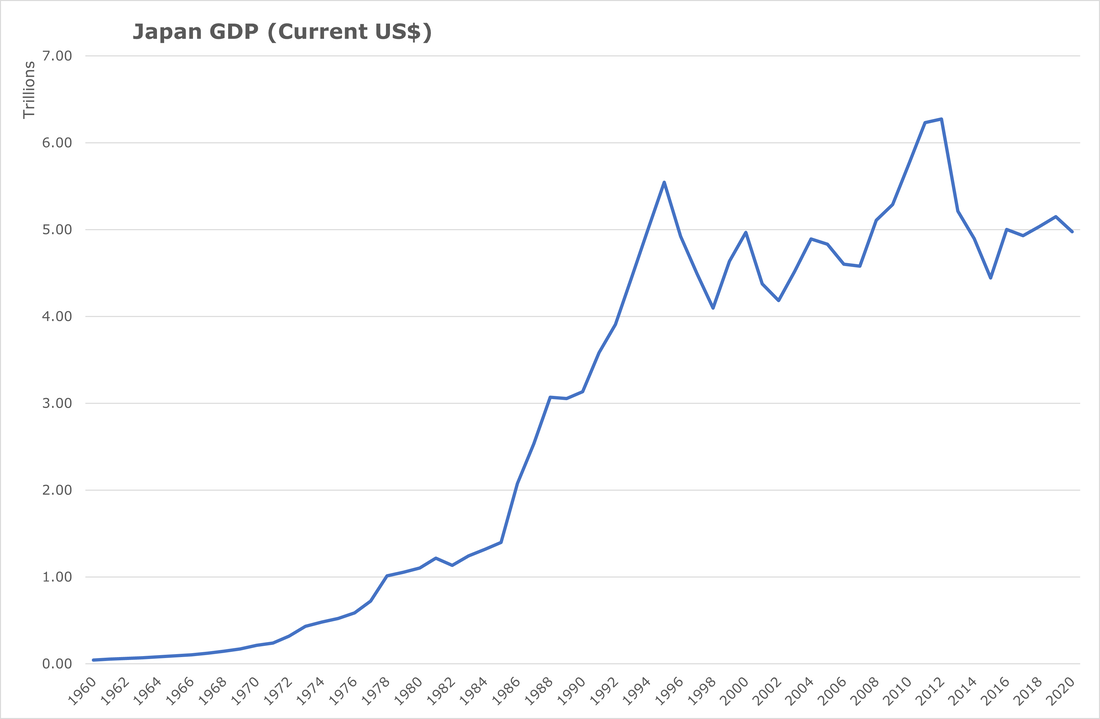 Source: World Bank
The results of Abenomics were various:
At the end of the day Abenomics, despite certain undoubtful positive results did not get the success initially hoped, leaving the national economy with some weaknesses. The pandemic hit Japan hard, but the country, compared to the others, had a quick recovery. Real wages went down by about 1%, exports have widely recovered, while imports are struggling to come up again. Inflation rate was negative at the end of 2020, but with the present situation analysts’ previsions talk about an increase, at least slight, in the country's inflation.

On 4 October 2021 Fumio Kishida became Prime Minister of Japan. One of his goals is to define a “new form of capitalism” for Japan. In particular, he is saying that he wants to opt for an economy which a broader range of people may benefit from: for example, by increasing real wages. Yet, the way through which he is going to do this has not been made clear yet by his first declarations.

The Japanese stock market has a capitalization of approximately $6.79T and it’s the fifth biggest stock exchange by market capitalization. Japan currently holds the second largest weighting in MSCI’s All Country Index. The most important index regarding Japanese stocks is the Nikkei 225 which consists of the 225 biggest companies traded at Tokyo Stock Exchange. The index is not market cap weighted (which means the index weightings do not represent the market value of the stock market as a whole) and is mainly composed by Technology and Consumer Discretionary stocks, which account for more than 72% of the index at the beginning of October 2021.

Nikkei 225’s current price is 29,100, up 75% from March 2020 low and 7% YTD but the index has traded sideways since the start of 2021 setting the year high at 30,670 and it shows limited correlation with the S&P 500 compared to European indexes.  Forward price earnings is currently under 15, and dividend yield consistently exceeds the world index for the first time in more than a decade. However total Market Cap to GDP ratio is currently above 150%. 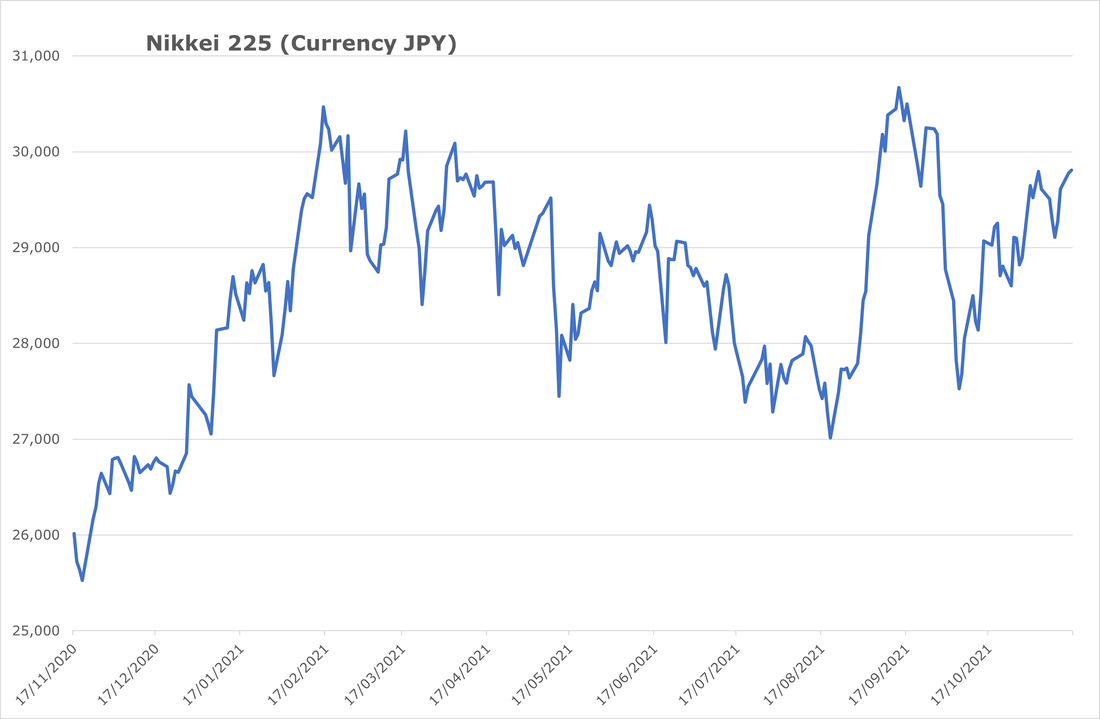 Source: Yahoo Finance
Analyst predictions
Lazard predicts that Japan could lift its state of emergency and reopen through the end of the year. The government could also reduce quarantines for people coming from abroad. GDP is expected to grow 3.8% in 2021 and 2.8% in 2022, CPI is forecasted to grow 0.6% in 2021 and 0.8% in 2022. Earnings above consensus are expected due to the uptick in demand from outside the country, despite weak internal consumption. Lazard anticipates the stock market to perform in line with corporate profits. A poll of 22 analysts organized by Reuters forecasted the Nikkei 225 to reach 29,450 by December, up 1.2% from the current 29,100 level.

An event that might have a significant impact on the Japanese market is the election of the new Prime Minister Fumio Kishida. In fact, after former Prime Minister Yoshihide Suga’s resignation, the new representative of the Liberal Democratic Party (LDP) has officially taken the lead. However, for his mandate to be successful, Kishida has to face several challenges, on the outcome of which the future of the third-largest world economy will depend.

First of all, the priority will be to find an adequate response to the pandemic, which will enable the country to ease its internal restrictions without compromising the citizens’ safety. In fact, the former PM’s government measures against the pandemic have been strictly questioned, given the high infection rate and the modest vaccination consensus. Furthermore, Kishida has included in his propaganda the willingness to drive the country away from the previous neoliberal policies and to promote (often referred to as Abenomics) instead, a broad-based growth that will smooth out the inequalities in the country.  For the sake of clarity, neoliberal policies refer to government measures taken in Japan in the 1990s and 2000s to stimulate economic growth by promoting benefits and tax reductions to the wealthy part of the population. According to such theories, these disproportionate incentives would trickle-down a long-term increase in the productivity of the whole country, despite contributing to expanding income inequality. On top of that, Kishida’s proposals include investments in technological and scientific sectors, as well as the creation of a generous “university fund” to support academic research. The new Prime Minister also specified that he would provide the country with additional fiscal stimulus, and he would deal with the threats endangered by China and South Korea.

Economic outlook
​
Considering the possible outlook for the Japanese economy, it is worth pointing out that Covid cases are finally decreasing and therefore there is room for a reverse in the current downturn. However, after the last virus outbreak during the summer, the International Monetary Fund and the Bank of Japan have already revised their predictions for 2022 GDP, using a more cautious approach. Kishida, however, argued that it is essential for the Bank of Japan to keep a stable inflation rate of around 2% even though, as of July 2021, the target was still far from being concrete. By looking at the Consumer Price Index in that period, this is particularly true for the Transport and Communication sector that suffered a 5.5% drop in prices. 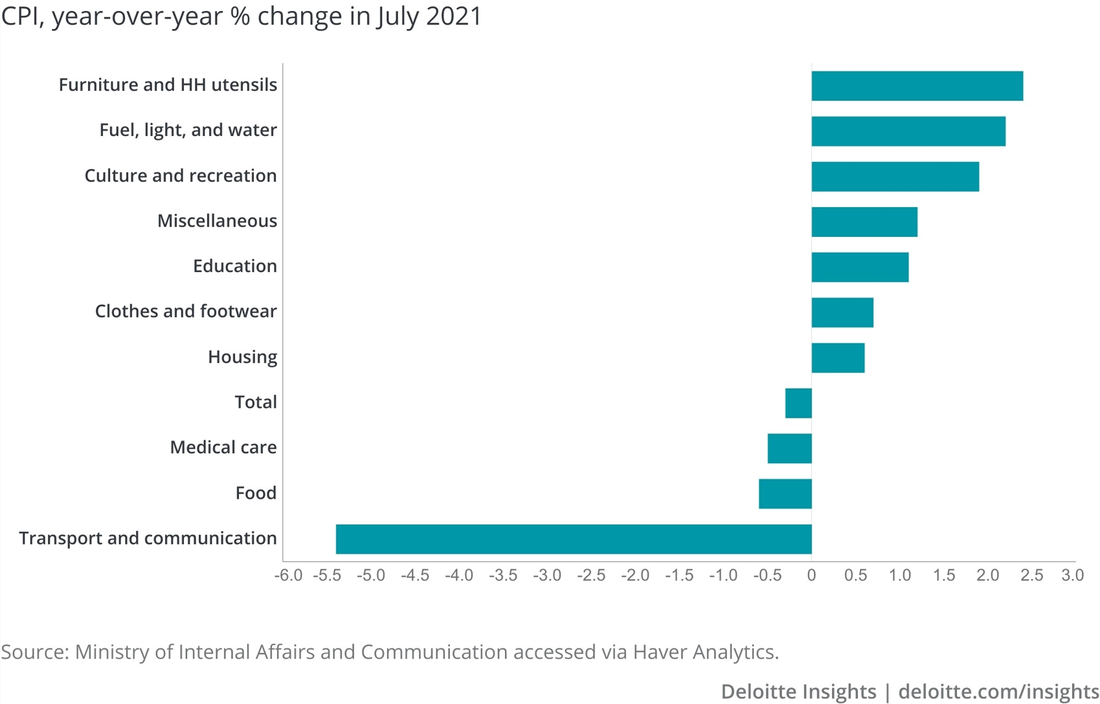 Market response
Finally, for what concerns the market response to Kishida’s instauration, there have been signs of disapproval from the investors due to the spread of the worry that the new PM could promote a capital gain tax increase. In fact, while the Tokyo Stock Price Index (TOPIX) gained 30% after the former PM’s resignation, the market reaction to Kishida’s election has been less positive, with the index dropping almost 2% since Kishida has been nominated to lead the LDP. However, the possible scenarios will become clearer after the Japanese General Elections scheduled on October 31st, which will determine the extent of the consensus potentially gained by the LDP.