On April 15th, 2018, Goldman Sachs Group announced that it had completed the acquisition of Clarity Money for an undisclosed price. The acquisition was formally made by GS Bank, one of the company’s subsidiaries. Clarity Money provides personal finance services through an app, with tools that help clients save and borrow.

ABOUT CLARITY MONEY
The company was founded in 2016 by venture capitalist and entrepreneur Adam Dell (brother of Michael Dell, founder and CEO of Dell Technologies). In about two years, this startup has earned the trust of more than one million customers. This impressive result was the outcome of a strategy based on transparency and the use of technology. As stated on the startup’s website: “We harness the power of artificial intelligence (AI), machine learning and data science to personalize your experience”.
Clarity Money is a backed by well-known players such as Soros Capital and the VC arm of Citigroup known as Citi Ventures. The service provided by the company operates by offering suggestions for loans that users could refinance, but also by suggesting subscription or expenses that customers could cancel. As explained in an article of the Financial Times “If a customer accepts an offer from another service provider, Clarity takes a finder’s fee”.

A NEW STRATEGY
This acquisition represents a stepping stone towards a new path undertaken by Goldman Sachs in becoming a more universal bank, as most of its major competitors. Such approach would make the bank able to offer complementary services to its existing clients and generate more revenue stream from the consumer business side of banking. As reported by the Financial Times “the lending push is across the board”. Looking at the balance sheet, total loans are “more than 10 times the level of 2012” according to the Financial Times. The company ended 2017 with more than $16 billion worth of loans.
As reported by The Wall Street Journal, through Clarity Money’s app Goldman Sachs will be able to promote its services in loans, insurance policies and wealth management tools. A clear challenge for Clarity will be to recommend the best products for its users, even if they are offered by a direct future competitor of Goldman. 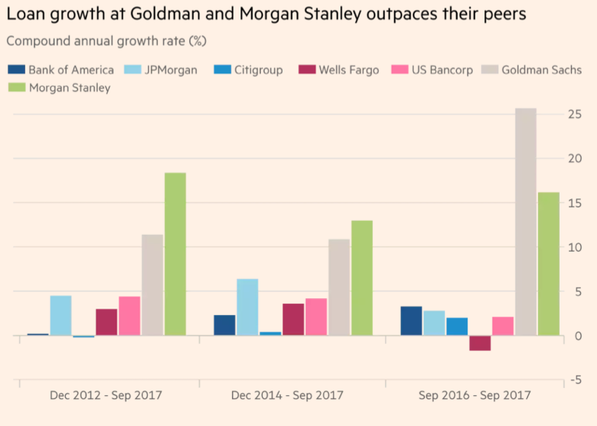 Source: Financial Times
MARCUS BY GOLDMAN SACHS
Marcus was launched less than two years ago in 2016 as an online banking service offering personal loans and online saving accounts. This relatively new business was named after Marcus Goldman, a German financier and one of the founders of Goldman Sachs. As of now, Marcus is believed to have already around 500,000 customers and has according to the Financial Times “about $20bn of deposits and originated about $3bn of unsecured loans”.
Stephen Scherr, chief executive of GS Bank USA, said that “consumers want a better way to manage their finances. Clarity Money has pioneered a consumer-centric approach to personal finance that will help Marcus continue to put power in the hands of consumers”.

WHAT WILL HAPPEN TO CLARITY MONEY?
Mr. Dell, founder of Clarity Money, will join Goldman Sachs as a partner and according to the Wall Street Journal about two dozen of Clarity Money employees are expected to join the founder at the New York-based bank.
​
Riccardo Lizzi