As it has been widely recorded, the 10-year Greek government bond has fluctuated a lot during the crisis and recorded a peak of almost 50% yield in 2012.

As it is visible by the following chart, the ASE index reached sky-rocket prices during the 2007-2008 period with a clear example being Piraeus Bank, whose stock price had reached roughly €220,200 in 2007(today its stock price lies at €3.4, awaiting a further reduction due to the recapitalization of the banks which is imminent in 2019). 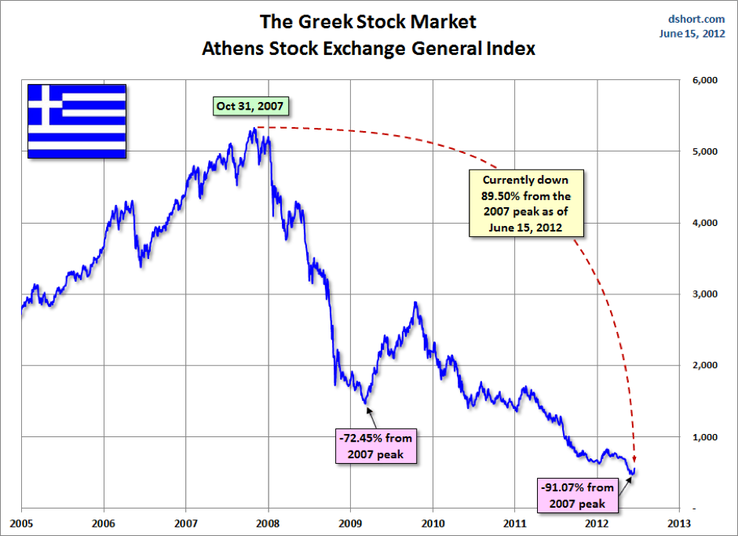 Another interesting highlight is the effect of political uncertainty on the 10-year Bond yield. When Syriza became the favourite to win the elections in January 2015, after a successful issuance of sovereign debt in summer 2014 by the Antoni Samaras’ administration, the yield stopped its stable route and began hiking higher and higher. However, the Tsipras’s administration managed to prove a lot of people’s assumptions wrong; right now, the 10-year bond yield is less than 5%, a level unseen since 2007. This has not come easily. There is constant worry about the Greek current affairs in the world especially in the IMF and the ECB and has been a point of interest in all of the Eurogroups since 2012. We have to keep in mind that institutional investors and investment-gurus such as John Paulson and Prem Watsa, who own Piraeus Bank and Eurobank respectively, have kept an ongoing interest in Greek markets throughout the Greek crisis.

It is a fact that Greek economic crisis has been in the centre of discussions on an international level for a long time. In 2012, Greek Government made the biggest (technical) default on sovereign debt ever ($138bn); it went indeed into debt restructuring. Since 2010 the Governments have implemented 12 rounds of tax increase, have used 3 bailout loans (2010,2012 and 2015) and have negotiated a 50% “haircut” on debt owned by private banks in 2011. Even worse has been the social crisis that arose, due to the ever-increasing margins in the payrolls of the upper-classes and that of the lower ones. This has led to the change of 4 different governing political parties and countless government restructurings in terms of ministers and MPs, with the most recent being the resignation of the economy and development minister (Papadimitriou) along with his wife (Antonopoulou) after a scandal was unravelled regarding the usage of state-given subsidies for their interest, bringing a political turmoil in Greece.

In an interview with Reuters, the head of ESM Regling said Greece would not need a debt haircut, provided it continues implementing reforms so that it can regularly finance itself via the markets. Regling added Greece "could" become the "fifth success" story of European emergency bailouts, if it remains on its reforms course.

On March the 14th, the Greek State raised €812.5m through the issuance of 1-year T-bills. The total amount auctioned was €625m, while total bids reached €1,986m (3.18x coverage ratio) for an interest rate of 1.25%. The Greek debt agency (PDMA) is expected to accept non-competitive bids of €187.5m from primary dealers today, bringing the total amount raised at €1bn.

Following press reports that the IMF insists on Greece adopting all fiscal measures in 2019, including the reduction of the tax threshold (instead of 2020) and pension cuts, due to more conservative forecasts for GDP. According to the Greek news agency Kathimerini, government sources are optimistic that the IMF will reconsider its view after the ratification by Eurostat of the 2017 primary surplus (which is estimated to have settled above 3.5%) and of the budget performance in 1Q18.  European creditors also appear to support Greece on this issue, with the EC Economic Affairs Commissioner Moscovici urging the IMF to look at actual data, expressing his confidence that primary surplus targets would be met and at the same time GDP would grow by 2.5% in 2018-2019.

Reportedly (Bloomberg), the EC Economic Affairs Commissioner Moscovici said that Greece had 99 days to implement 88 pending prior actions in order to reach a comprehensive deal with creditors. The comprehensive agreement will have four elements: a) completion of technical discussions for the fourth review in May, b) a credible deal for the post-bailout period, c) debt relief measures, d) a national growth plan to be presented by Greece on April the 27th at the next Eurogroup meeting.

Following the Eurogroup meeting on March the 12th, the Chairman Centeno said that Greece had completed all prior actions for the third review, hence it would receive the pending €5.6bn loan tranche in the second half of March. Centeno added that technical discussions for linking debt relief to a growth adjustment mechanism were progressing well, pointing however that the country has to fulfill all actions until the end of the current programme in August in order to be eligible for any additional debt relief. Finally, Centeno said that the government has to deliver in April a long-term growth strategy which will be a crucial element of the post-programme framework.

ELSTAT announced that the Industrial Production Index (IPI) decreased by 1.7% y-o-y in January 2018 on the back of a 23% y-o-y decrease in electricity production. On the flip side, manufacturing output grew by 6.4% y-o-y, mining & quarrying production advanced by 22% y-o-y. The decrease in electricity production is crucial when it is associated with the diminished monopoly of DEI, the previous public producer of electricity and the rise of powerful corporations such as Mytilineos (MYTIL) whose stock has risen dramatically over the last year.