​Greek debt is not the riskiest anymore

​After a very long period of time, Greece seems to have attracted again the consideration of investors. In 2008, with a crisis in the subprime mortgage market started in the United States that leaded the collapse of the investment bank Lehman Brothers, the country felt in an extremely serious, never seen before, financial crisis that put into trouble the strength, not only of the country itself but of entire Europe. These days, within the eurozone’s world of low or negative interest rates, Greece is no longer seen as the riskiest bet. For the first time in many years, Greece yields’ felt below those of Italy.

At the end of October, Standard & Poor’s rating, which is a credit score that describes the general credit
worthiness of a company, city, or country that issues debt, upgraded Athens’ credit rating to BB-. Italian debt also performed strongly during the summer’s global bond rally, rating to BBB. Even if BBB is better than BB-, the market seems to favor the content at the expense of rating. Moreover, an important difference between the two countries is that in Italy there are several political tensions. These stresses and pressures are present from many years, but in the last two years have aggravated beyond all limits. It is true that there is a new coalition between the center-left Democratic Party, which has as its president is Paolo Gentiloni, and the anti-establishment Five Star movement, with Luigi Di Maio as a leader, that has been formed in September, but some investors fear the possibility of a return to the civil instability of last year which could cause catastrophic and irrecoverable damage at the Italian economic condition. The previous government clashed with the EU over the size of its budget deficit. This unsettled situation has a negative effect on the majority of investors that remain cautious preferring more stabilized and strong countries such as Switzerland, Germany and Sweden (ranked by U.S. News & World Report as the most economically stable countries in the world).

Yields of both countries remain very low by historical standards, but Greece’s bond market rehabilitation has been more impressive.
First of all, the recovery of Greece’s economy was continuous and undisturbed, and over the years the political situation of the country has improved and at the moment there are no civil pressures; this helped to create and develop a calm and untroubled environment for the economy. In July a center-right government, under Kyriakos Mitsotakis, was elected; this fact has raised hopes that market-friendly reforms will be accelerated. As it is possible to understand, this is exactly the opposite of what is happening in Italy. Furthermore, Greece’s bond market is small in size, this implies that there is less urgent pressure on government finances compared with Italy that in order to refinance its own vast debt bundle can only rely on markets.  An important role for the success of Greece is also played by external forces, around the world yields were very low and this has driven investors desperate for income into riskier and riskier markets. The torrent of cash flowing into Greece’s undersized bond market has pulled yields to record lows.

Despite its recent upgrade, Greece’s debt rating remains poor and below many nations. However, some overseas investors are taking into account the option of a relatively vigorous growth outlook that might open, or has already opened, a path back to previous investment grades. This result may terminate in the inclusion of the country in the debt purchases program of the European Central Bank (ECB). By contrast, the Italian economy is expected to have a slower and weaker growth leading highly difficult and almost impossible to imagine the country back to its earlier levels.

However, the two areas remain difficult to compare; for the moment the previsions for the end of 2020 are that Greece is expected to grow by 2.8 per cent, while the expansion of Italy is estimated to rise only by 0.4 per cent. In any case, it is important to remember that Italy has a GDP almost 10 times higher than the one in Greece. Markets’ volatile has also to be considered, the circumstances can change at any point in time. 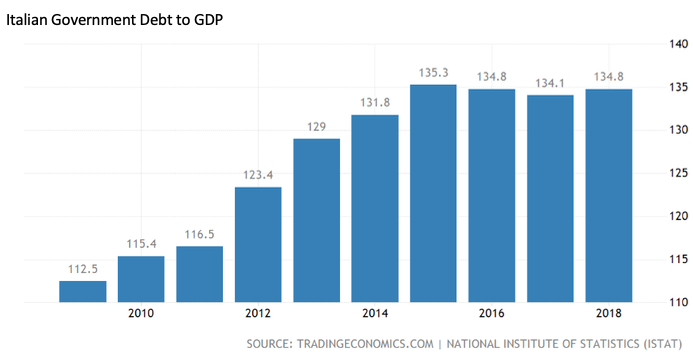 ​In conclusion, it is not yet the time for warming, but surely it must be taken into account that, for the moment, Italy is seen as the riskiest country in Europe. The southern Europe country does not seem able to lay the foundations for the structural reforms of which he needs in order to grow. Additionally, the nation does not appear to have the ability and the financial resources to reach the status and the positive results obtained before 2008.