Has Gold Lost its Safe-Haven Status?

Since its introduction in Lydia 600 BC (nowadays Turkey), gold has been used both as medium of exchange and store of value. For the last decades, gold has been considered by the financial literature as the ultimate safe haven as it has remained stable or even increased during times of crisis, such as the Great Depression of 1929. But before we get in more depth, we must first understand the financial meaning of a safe haven.

What is a safe haven?

A safe-haven investment is one that has an inverse correlation or no correlation at all with the rest of the assets present in an investment portfolio. Hence, a safe-haven asset is expected to retain its value or appreciate during times of market turbulence, a time when most of the other portfolio elements generate losses.

Before 1971, the United Stated abided by the “Gold Standard” which linked the gold to the USD by constraining the Federal Reserve to print no more dollars than the total worth of the stored gold. However, even after the dollar transitioned to FIAT money – government-issued currency that is not backed by a commodity such as gold – the strong USD-Gold relationship continued.
As today the US Federal Reserve stores the largest gold reserve in the world (around 8134 tonnes), the USD is the main currency used to buy gold. Therefore, when the dollar depreciates in terms of other currencies, gold becomes cheaper for foreign currency holders which in turn increases the demand for gold and consequently its price. The opposite is true if the dollar appreciates in terms of other currencies. One interesting exception from this rule occurs when there is a wide selloff in international markets, which can cause selloff in foreign currencies and a synchronized run to the safety of the Gold and the USD.

The Gold vs Real Bond Yields
​
Given that both gold and treasuries are perceived as safe-haven assets, the real bond yields and the gold price have a negative correlation. This is because gold is a non-interest-bearing asset and hence if the real yields (adjusted to inflation) go up, capital moves from gold to bonds. The opposite is true when real yields go down in value.
Looking at Figure 1 we can clearly see the almost mirrored relationship between the price of gold and the 10-year treasury real yield (inflation adjusted). 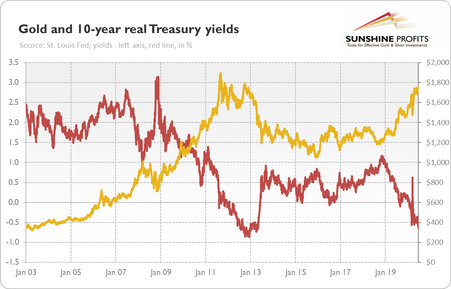 Figure 1. Gold and 10-year real Treasury yields. Source: St. Louis FED, Sunshine Profits
As shown in Figure 2, this negative correlation has remained relatively intact even during the April 2020 selloff. However, this means that investors who only held bonds for the short term together with gold lost money as both the price of gold and bonds dropped.
​​ 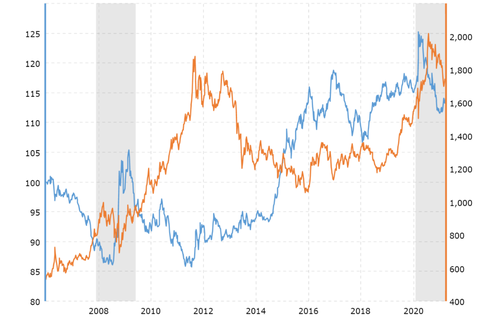 Figure 3. Gold vs US Dollar Index. Source: Macrotrends.
​As shown in Figure 3, for the last two decades gold has been inversely correlated with the USD (in the diagram represented by the US Dollar index), but this status quo was broken in August 2020 when both the USD and gold futures started their synced decline. This deviation from the rule was quite surprising give the inflation expectations arising from the massive QE stimulus deployed by the Fed, something which should have pushed gold higher given its status as an inflation hedge.
Another hit to the gold’s safe heaven title is highlighted in Figure 3 by the red arrow which points at the unexpected gold selloff at the beginning of the COVID 19 pandemic. While many would have expected a run to gold for safety, due to massing selloff in equities many leveraged investors had to sell gold in order to cover their margin calls. This short-lived dip in gold prices resulted in a gold run to a record $2000 per ounce, followed by a correction which resulted in the gold and the USD falling in tandem.

Conclusion
​
The recent failure of gold to act as a hedge during the COVID 19 selloff in April 2020 combined with its recent positive correlation with the USD raises the need for new portfolio hedging ideas. One possible way could be diversifying across different economies, using derivatives such as options or credit default swaps to hedge against market downturns or even investing in crypto currencies. Regardless, gold can’t be anymore the sole hedge in a portfolio!

Want to keep up with our most recent articles? Subscribe to our weekly newsletter here.
​
​