As Hong Kong pro-independence ongoing protests incessantly keep their pace from June with no sign of slowdown, the natural question among investors and international watchers become to assess whether, and especially to which extent, this political uncertainty can affect market stability. Being far from clear, the future outcomes, as well as market trends, are still ambiguous and a faltering recovery is expected.

Started as a non-violent dissent against the extradition bill promulged by Hong Kong government in April, it soon transformed into a fierce protest with broader objectives, which exacerbated the already existing and underlying issues with Beijing. (as shown by the violent turmoil happened during the anniversary of the Communist party rule in Hong Kong in early October)
Even if the leader Carrie Lam eventually suspended the bill in September, protesters’ requests are now different, wider and more substantial. Among their “Five demands”, inter alia, they are pushing for independence, universal suffrage and lower central controls. But, why is Hong Kong so necessary for China and which are the long-term market consequences of this protest?

It is transparent that the history of the city, its strategical position and the freedoms accorded after the “Handover” from UK to China in 1997 make Hong Kong unique both from a Chinese perspective and on a global scale. Indeed, despite Hong Hong’s proportion of Chinese GDP significantly shrank in the last two decades from approx. 20% down to 3% (as shown in Fig. 1), the city still preserves a pivotal and essential role for Beijing development today. 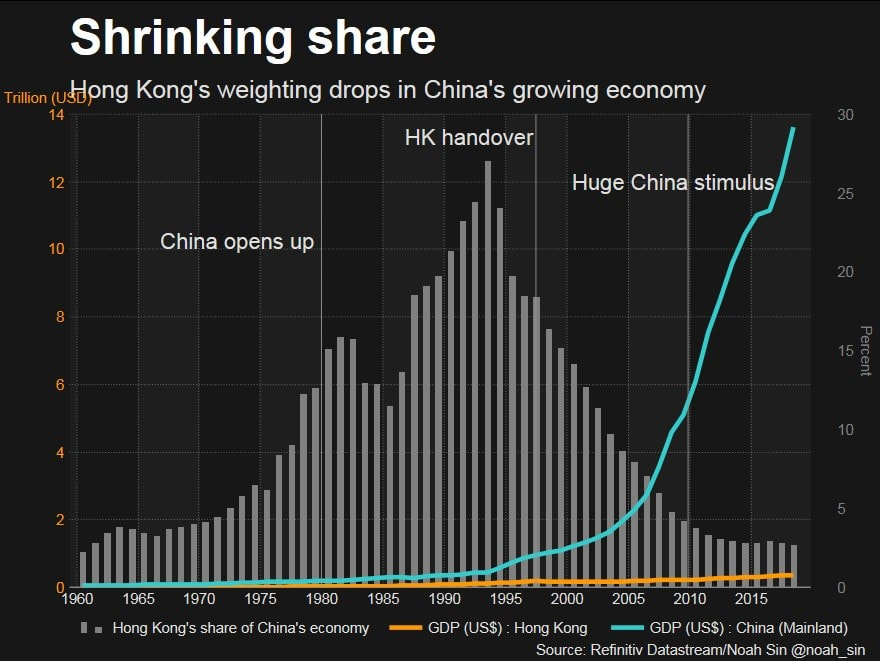 Fact is, Hong Kong represents one of the most liquid market globally characterized by free flow of capital, therefore being a gateway between Mainland China and the rest of the world. This connection entitles Chinese firms to access international funds on the offshore market as proven by giant tech companies, like the Tencent (which is actually based in Shenzhen) or other financial institutions, like Agriculture Bank of China, which strategically listed in HKex. As proof of this, only in 2018, more than 70% of Chinese offshore IPOs were held in Hong Kong, confirming its irreplaceable market significance. (see Fig. 2) 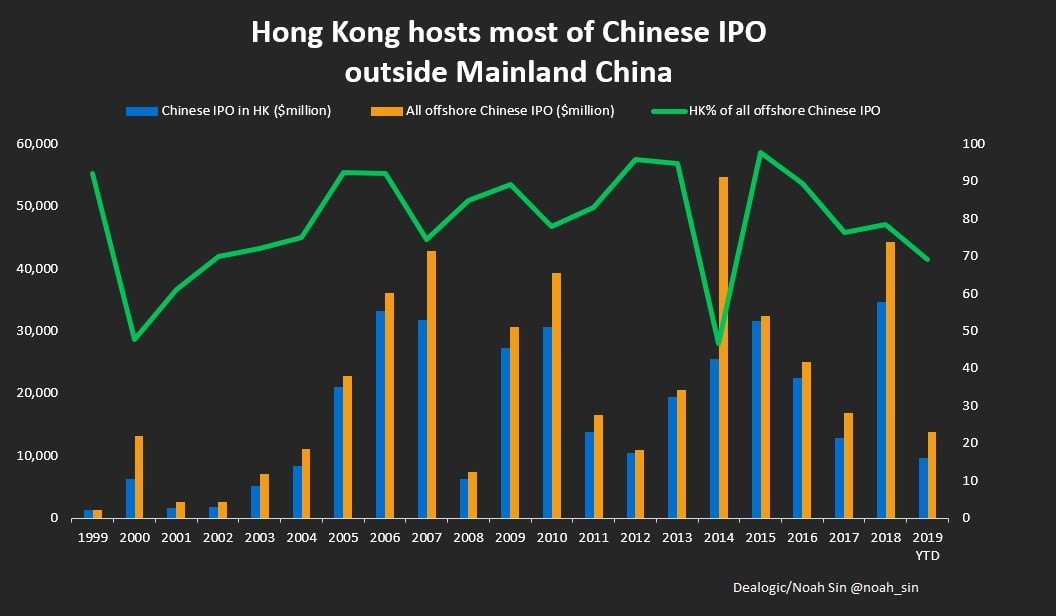 On the other hand, thanks to the free conversion of HKD, foreign investors have the possibility to invest in the Chinese market and especially in the onshore one through the connect between Hong Kong, Shanghai and Shenzhen. As a result, almost USD 70bn were invested in stocks listed in Shanghai, showing, once again, how Mainland China benefits from Hong Kong financial relevance. (see Fig. 3) 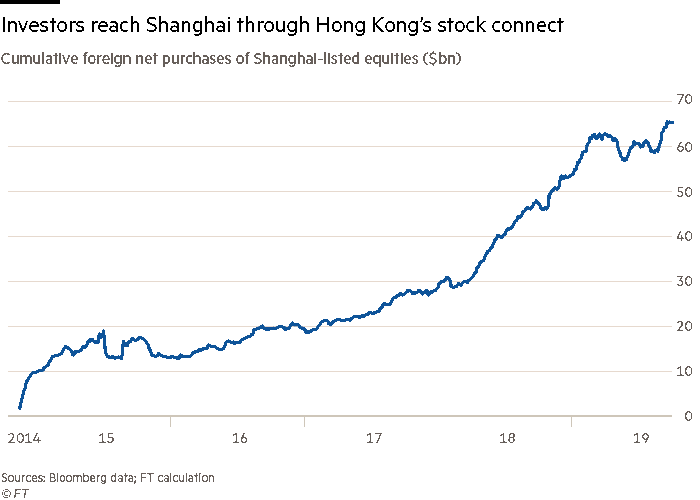 These are few of the main reasons supporting the interdependence between Hong Kong and Beijing which should be profoundly taken into account when considering the Chinese interests on the table. To sum up, “You need Hong Kong in as far as you keep capital controls. It doesn’t mean you don’t need Shanghai. It’s that Shanghai alone can’t do it.”  are the words of Alicia García Herrero, chief economist for APAC at NATIXIS.

As for market response to the protest, the Hang Seng Index manifested a wide fluctuation range during last six months, with an initial climb in June with the protest being still no violent, and a relevant plunge from late-July, with the ongoing conflicts becoming more and more fierce. Notwithstanding, stock market trend appears more optimistic today, due to investors’ faith in Hong Kong market recovery or the possibility that the market already incorporated this information, with the HSI being lower around 2.2% compared to the early-June level. As a matter of fact, this is confirmed also by the fact that the current volatility is at its lowest value from mid-August, as measured by the Hang Seng Volatility Index. (see Fig. 4)

If a slow, albeit encouraging, recovery is expected in stock market, the same cannot be applied for IPO market, which is struggling compared to 2018. Besides famous cases, as Alibaba that chose to postpone the USD 15bn  listing in Hong Kong due to the political riots, other companies followed suit with the proceeds and number of issues reduced from 2018. (as shown in Fig. 5) However, Hong Kong still led the global IPO market according to Bloomber data, therefore generating optimistic but prudential expectations for Q3 2019. 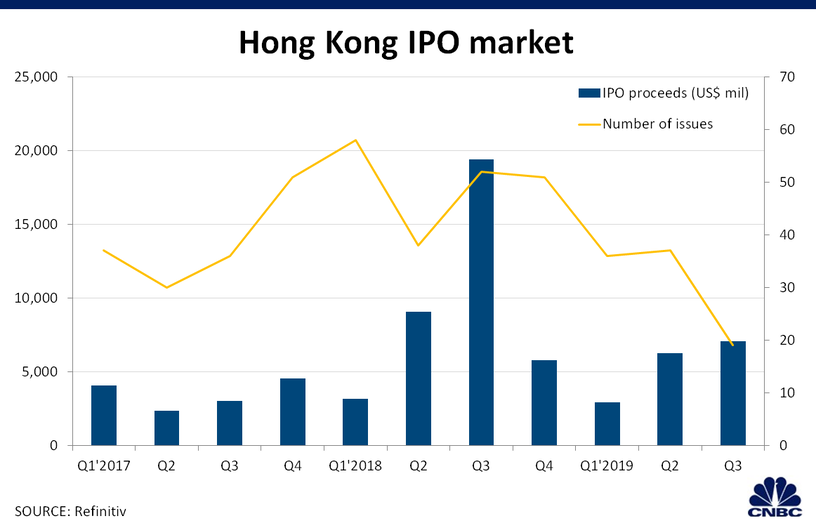 Two main considerations are then in order: first, this protest is far from over, and Beijing should take in consideration the possibility to negotiate with protestors in order to guarantee a long-run win-win cooperation with Hong Kong under a plethora of aspects (from financial, import/export and political perspectives). Second, markets are still uncertain and reluctuant about the future development of this turmoil, but Hong Kong, even if undermined by these protests, is definely proving a strong resilience.