How are U.S. Banks responding to the crisis?

The Sars-Cov-2 virus pandemic almost reached every corner of the world and is particularly touching the United States and many European countries. Governments are taking severe and drastic precautions that will cause unquantifiable damage to the economy. The possible consequences of this crisis should make us worry. The US economy is very vulnerable to the ongoing pandemic. In fact, the Federal Reserve has been warning the White House for months that the current economic cycle, which has been growing since 2010, is about to run out. Moreover, the ongoing oil shock is hurting the country’s producers and the consequences at the national level can be significant and lasting.

We will analyze how major U.S. banks are responding to the effects of the pandemic and particularly their reduction to the credit given to European companies, giving birth to fears that Wall Street is withdrawing into American borders as it happened during the financial crisis. As also reported by the Financial Times, American banks have become more cautious in taking out bilateral and syndicated loans to large client companies in Europe in recent weeks.

As the quasi-totality of worldwide companies, US banks are suffering
Potential losses become more and more real day after day, followed by a double-digit drop in earnings. JPMorgan and Wells Fargo open the American quarterly season and, with their accounts, show the expected heavy effect of coronavirus on the economy. The bank led by Jamie Dimon set aside $ 6.8 billion in the first quarter to cover possible losses on loans to consumers and businesses. Wells Fargo has set aside 4 billion.

Foreseeing a "severe recession" and a complete reopening of the United States no earlier than the summer, JPMorgan CEO assures: "We are ready to do our part to help the country, even taking losses." Dimon does not hide that the reality in which its institution is operating is difficult and that, if the second quarter is confirmed in line with expectations of 20% unemployment and a contraction in GDP of up to 40%, it is not excluded that the bank set aside further profits to cover losses.
The coronavirus emergency, and the consequent leap in the funds set aside, have already felt heavily on JPMorgan's accounts. In the first three months of the year, net profit dropped 69% to $ 2.87 billion, the lowest since 2013. Revenues dropped 3% to $ 28.25 billion, below analysts' expectations. Wells Fargo has experienced a drop in net profit of 89% to 653 million and revenues down 18% to 17.72 billion.

The results of the two institutions confirm that banks have been hit hard by the coronavirus, which has prompted businesses to ask for access to credit lines and consumers to ask for the suspension of their debt payments. And according to investors, it is only the beginning: the securities of the banks have lost a third of their value this year against a 14.5% drop in the S&P 500, which means that further heavy repercussions are expected in the sector. The coronavirus crisis is a "serious threat to the stability of the financial system," says the International Monetary Fund, noting however that banks are in a much stronger position than in 2008.
According to analysts, the wait is now for the results of European Banks that are "particularly vulnerable but particularly vital" for the European economy, specifying that the ROE of the banks of the Old Continent was around 5% last year, half of one of the American banks. Politics in Europe is doing everything possible to protect the banking system because it is aware of how important it will be for economic recovery. The longer the closings go on, "the better the chances of a banking crisis." As we can see in the graph, Euro area firms rely on bank borrowing to a much greater extent than their US peers, proofing that a credit crunch would be extremely vicious for European companies. 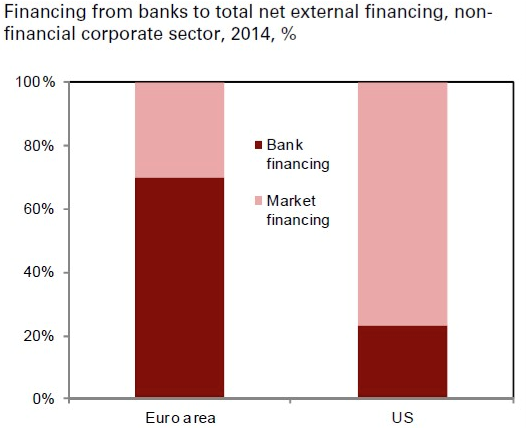 ​In light of this, some German advisors are pointing out a clear pattern of an ‘America first’ attitude among large US banks. This uncomfortable situation is influencing risk management and regional exposure of US banks, which comes at the expense of foreign companies, particularly European ones.

As showed by the Financial Times, many European Companies have already been deprived of additional credit lines from US banks. It is the case of JP Morgan with BASF, the German and world’s largest chemicals group, and also Bank of America with sportswear giant Adidas.

However, JP Morgan and other US Banks ensure that their commitment to European companies remains steady, clarifying that all procedures and standards for all of their clients stay the same, without any discrimination of geography… even if they admitted that profit margins in Europe were much lower than in the US.