How CVC had planned to buyout Toshiba

It is no secret that in the last years, activist investors have identified in the Japanese stock market an incredible investment opportunity. Following the introduction of new rules on corporate governance in 2015, the Japanese corporate world has come to terms with the importance of listening to the demands of shareholders and actively integrating their suggestions within their business. In 2019 there has been a remarkable spike in the number of activist campaigns. The scope of these campaigns has also been broadening as they transitioned from simple requests of share buybacks to demands for the restructuring of businesses which would, according to activist investors, potentially unlock long-term value for the business. In 2020, investment opportunities still abounded as many Japanese listed companies were trading below their book value, signaling potential mismanagement of resources and therefore representing a potentially lucrative prospect for active investors. Investors identify in the Japanese financial market a developed market to find firms trading below their intrinsic value.

Toshiba was a prime example of such an attractive investment opportunity for active investors. In 2021, the company had managed to improve its financial performance after a very turbulent period. It all started in 2015 when it was accused of padding its profits by Japanese authorities and was consequently fined. The 2015 scandal was followed by the failure in 2017 of its American nuclear business, which led Toshiba to end its 2017 fiscal year with negative equity. The combination of negative book equity and multiple delays in publishing its annual report and quarterly earnings inevitably led the company to be demoted from the first tier of the Tokyo Stock Exchange to the second tier. Nobuaki Kurumatani was appointed as the new chief executive officer to help Toshiba recover from this disastrous financial crisis. Under the guidance of Kurumatani, Toshiba divested a lot of its non-core business and issued new shares in an equity issuance of $5.3 Bn, which led to new capital flows and at the same time saw a significant number of foreign and activist fund enter as shareholders of the company. Kurumatani was eventually able to restore the position of Toshiba, as in early 2021, the Japanese company was allowed back in the first tier of the Tokyo Stock Exchange. However, Kurumatani, during his mandate, was repeatedly criticized by activist shareholder funds for, among other things, having an ambiguous M&A strategy, which some shareholders deemed to be contradictory. Following these critiques, which resulted in an extraordinary general meeting, Kurumatani position as CEO of Toshiba was becoming ever so more unstable, as rumors of a possible departure were starting to spread.

In April 2021, Kurumatani would be placed under even more pressure as the European private equity group CVC presented an unsolicited $20 Billion bid offer to take Toshiba private. If successful, this would’ve classified among the biggest buyout operations in the Asian region. This operation, however, raised some concerns among analysts for two key reasons. The first one was that CVC, at least in the Asian market, was used to working on a much smaller scale. The second one was that Toshiba plays a critical strategic role for Japan. It operates the country’s power plants, receiving, therefore, approval from the Japanese authorities wouldn’t, therefore, be so simple. CVC assured that it was intentioned to collaborate with Japanese officials to ensure that it would comply with all the requests. The private group expressly declared that it wasn’t necessarily looking for a majority stake in the company, even if this tends to be a predominant element in PE deals.

Notwithstanding potential concerns that analysts may have had following the bid-offer by CVC, the share price of Toshiba increased significantly, reaching levels which it hadn't hit since the disastrous crisis that it faced in 2018. 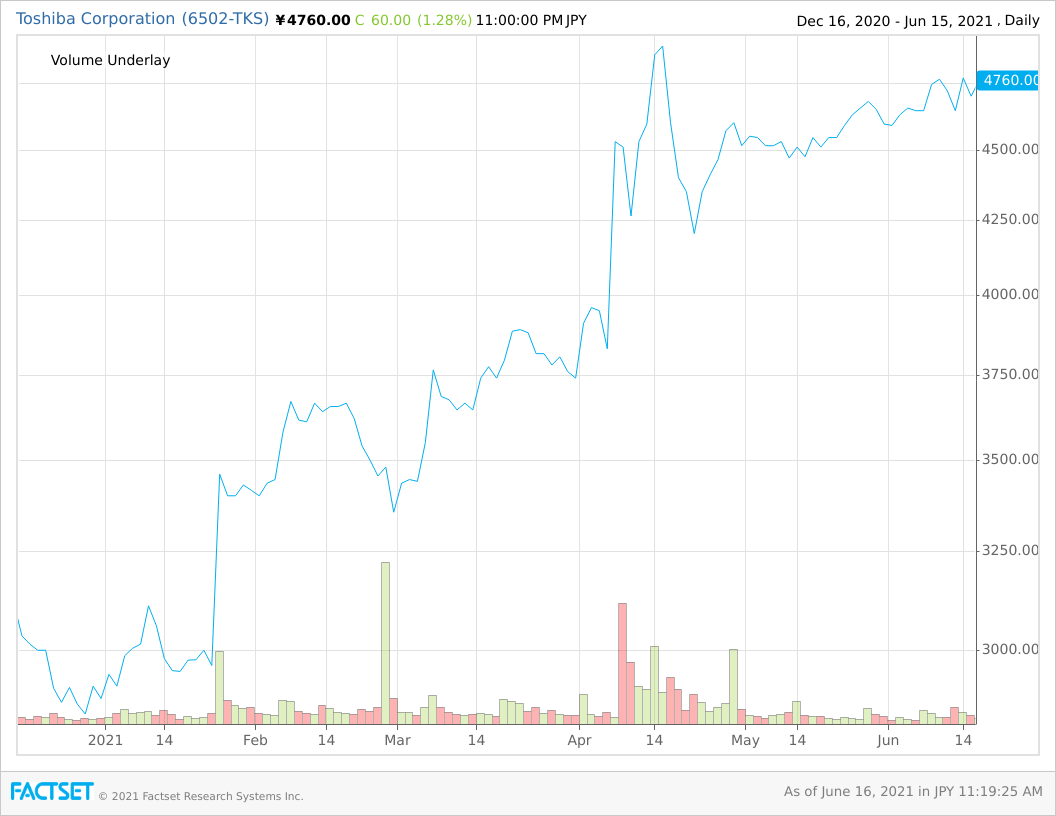 CVC's unsolicited offer sparked an unexpected domino effect. Many within the senior management team at Toshiba highlighted a potential conflict of interest as Kurumatani, before becoming CEO of Toshiba, was country manager for the private equity fund. Pressure from senior management, combined with the dissatisfaction of shareholders for the direction of the company, eventually led to the resignation of Kurumatani. Toshiba's board of directors also decided to block the offer from CVC as they believed that a better offer from another private equity fund was on the way and would most likely top the $20 billion bid from CVC.

CVC, which had initially not excluded the possibility of bidding against its PE rivals on the 21st of April 2021, instead decided to no longer pursue a buyout of Toyota. Some analysts speculate that this decision could also come following the decision from Kurumatani to resign from his position as CEO of the company. The future of Toshiba remains uncertain as potentially new PE funds prepare to make offers. Whether these offers will be enough to complete the buyout of the Japanese company remains to be seen.