​How Deutsche Bank can impact the European Asset Management Industry

Deutsche Bank has experienced falling revenues since 2011, and although 2018 signed the return to profitability after four years of net losses, the German biggest bank’s Restructuring Plan looks challenging and does not convince analysts and investors, as shown by the unpleasant stock performance, worsened by the negative media coverage related to many investigations, such as the Russian money laundry scandal. As talks with Commerzbank for a potential merger are definitively over, CEO Christian Sewing said to be open to sell part of the bank’s stake in German Asset Manager DWS, which manages around €700B of assets. After DWS’s IPO in March 2018, Deutsche Bank sold about 20% of the company, but still owns almost 80% of shares outstanding (for a total market value of €5.3B at the time of writing); disposing of this holding could help DB raising money and speeding the restructuring process. Moreover, it could deeply impact the European Asset Management Industry: in a field where fees are declining at a fast pace due to the spread of cheap and passive funds, combining two big corporations could save capital and human resources.

In 2018 DWS was able to generate €2.2B in revenues (14% less than the previous year), while net income declined as much as 50% from €732M to €367M. This poor performance could oblige Deutsche Bank to give up its stake at a low price, but at the same time this factor could lure many prospective buyers.

Rumours say UBS may be the front-runner. A merger between the two institutions could give birth to a new entity with almost €1400B of AUM. This kind of operation could also help UBS decreasing its dependability from other divisions (mainly Investment banking and services to high-net-worth clients) and boost revenues from the Asset Management unit (which accounted for 6.2% in fiscal year 2018 and is able to generate higher profit margins).

However, Allianz SE could be interested in acquiring the compatriot DWS too. The German Insurance and Financial Corporation is not new to mergers of this kind: in 2000 they acquired PIMCO, a Californian Asset Manager specialized in bonds, which runs €1460B of assets as of December 2018. In the event of the acquisition of DWS, Allianz would manage €2500B of assets (PIMCO AUM is excluded), which would allow the German group to reach considerable economies of scale, strengthen their presence in Europe and become the third biggest Asset Manager in the world, after BlackRock and Vanguard.
​
Another competitor could be Amundi, a European leader in the ETF industry owned for 75% by Société Générale. In this case another “European Giant” in the Asset Management industry would born, with more than €2000B in assets. However, the main difference between these three corporations is that UBS and Allianz, due to their size and the nature of their business (the former is also an Investment and Corporate Bank, the latter is known to be an Insurance Company) have, at least on paper, an advantage compared to Amundi for what concerns available liquidity and the possibility to take on new debt to finance a possible acquisition.

As pressure to lower costs for clients and regulation intensify, the fund management industry could be set for growing M&A activity, exploiting advantages arising from higher AUM. Moreover if Deutsche Bank chooses to give up its DWS ownership, it could push to a totally different scenario in Europe, where the investment management business is in the hands of a few big Institutions, which could translate into lower fees for investors but also into increased competition for smaller firms. 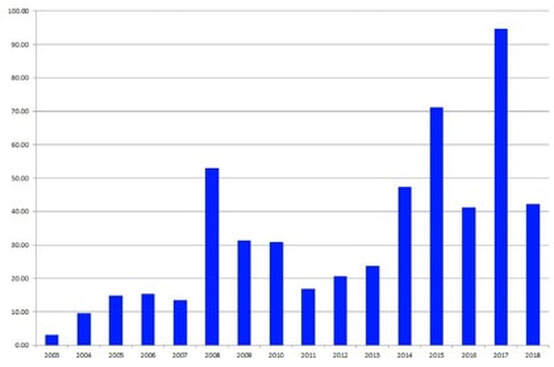 Fund flows in the European ETF Industry (€B)
This graph shows how popular passive and low-cost funds have been in the last years. Since 2003, only annual net inflows have been registered. On the contrary, Active Management has experienced continuous net outflows.