Expectations of increasing interest rates in the United States due to the picking up of economic growth are increasing the outflows from funds investing in junk bonds.
​After a long period of exceptionally low interest rates aimed at promoting economic recovery, international investors seem to fear that the FED will soon put in place a monetary tightening. An annual increase of 2.1% in US consumer prices has fueled expectations for a strengthening inflation and it has reinforced pressures on the Federal Reserve to intensify its manoeuvre of increasing interest rates. Moreover, the CPI index has increased of 0,5% in the month of January alone, while it was expected to increase by analysts just shy of 0,4%. The risk that future monetary tightening may exceed investors’ expectations with consequent economic slowdown and draining liquidity from the financial markets is the big unknown that weights on Wall Street in its ninth year of bull market. The ex-investment banker Jerome Powell, named by President Donald Trump, will chair the FED for the next years. The debate on the number of monetary strains to be implemented in 2018 and on the possibility of a rate hike during the next summit is still open.

​However, investors are already taking actions. 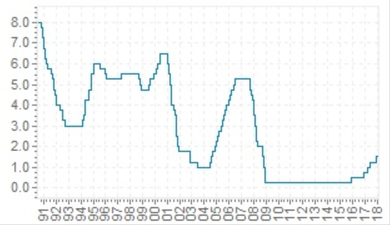 US interest rates level. Source: global-rates.com
​If the bullish trend on the stock markets could slow down, investors may return to appreciate US government bonds and there is already evidence of that. Actually, in these years of zero lower bound, investors have compensated their need of including bonds in their portfolio through the purchase of risky corporate bonds. In the last few years the capital placed on high yield bonds has increased excessively reaching 508 billion in 2017 due to the collapse of government securities yields and ultra-expansive monetary policies. Corporate bonds filled the supply gap and investors in search of returns had to take on more and more risks.

​Strong demand of high-yield bonds reduced the risk remuneration and therefore encouraged companies to issue debt, further deteriorating the quality of outstanding bonds. According to S&P, over 37% of the circulating corporate debt is issued by companies with high leverage. Therefore, if on the one hand expansive monetary policies have been vital to economic recovery, on the other hand they have made the market more sensitive to changes in the cost of money: an excessive increase in rates is likely to bring back spreads to pre-crisis levels, due to a return of investors on the treasury market. This is already happening: the renewed fears of higher rates in the US triggered a wave of redemptions from funds specialized in high yield bonds. According to the latest report of Epfr Global, the net outflows in the second week of February were over 10 billion, the worst outflow suffered by funds investing in junk bonds over the past two years.

​Therefore, there is the risk of a sudden wave of sales that would bring the spread to a level coherent with the historical average. The possibility of such fluctuations might be significant considering the weight of these contracts on the market and the exposure to them of mutual funds. The risk of an excessive monetary tightening increasing the cost of debt is that companies may have difficulties to refinance their debt and meet the deadlines. This risk of default seems to be mitigated, at least in the US, by Trump fiscal reform that could help companies to cope with payments thanks to tax breaks and higher cash flows thanks to the reduced fiscal burden. Once again, fiscal and monetary policies must be perfectly coordinated as to avoid abrupt repercussions on the market.