How real estate in China might harm the whole world 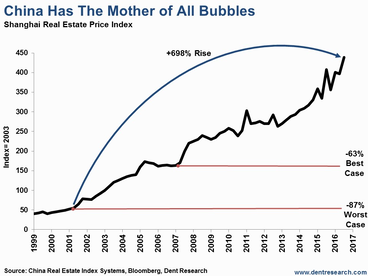 Since June 2015, the 100 City Price Index in China rose by 31% and, being concerned about these prices that were reaching $202 per square foot overtaking USA prices, China’s State Council is trying to encourage rentals.

Chinese buyers still make purchases in top coastal metropolitan areas of English-speaking countries, as if real estate prices will never fall.
The real estate markets of these cities are considered the safest, but they are not. These markets, indeed, can be considered as one of the biggest bubbles that exist today.

At the end of the first quarter of this year, housing prices in Shenzhen jumped by almost 80%, in comparison to the same period a year earlier, and by 65% in Shanghai - according to a report by the research company Capital Economics compiled by analysts Mark Williams and Julian Evans-Pitchard. They also pointed out that the Government prevented the bubble from collapsing because of the loosening of lending standards and that China began to remind the United States before the crisis.
Can you imagine what will happen when the real estate bubble, which is considered by the residents of this country as a means of saving money, will finally burst? 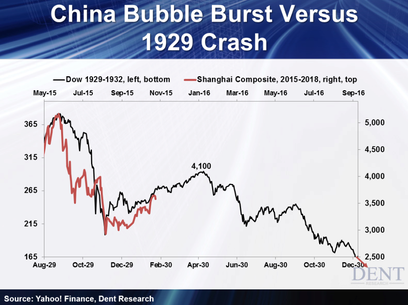 The rise in prices for Chinese residential real estate has been slowing down for over a year. For this reason Chinese investors realized that they could no longer make money on real estate and that it would have been better turning their attention to stocks. From that moment stock indexes started growing until when money accumulated in a decent amount. At that time the Shanghai Composite Index started collapsing and lost 42% in just two and a half months.

What did the Chinese government do? What any government is does when is does not want to recognize the reality: they bought shares worth hundreds of billions of dollars.
Do you remember when this happened in the past? The USA did the same when the American market collapsed in 1929.
So, can you guess what will happen in the future?​

Is it still surprising then if the Chinese stock market is behaving following the pattern of the American market since the Great Depression?