The coronavirus outbreak has put in severe doubt the ability of the hedge fund industry to overcome any financial unfavorable situation. Pessimistic ideas already emerged in 2008, when losses for the industry were on average 18%, despite delivering a better performance with respect to equity markets. However, in the decade following the financial crisis, strategies focused on bets on volatility shocks, low interest rates and bull markets have guaranteed outstanding performance, especially to passive funds.

Turning attention to the beginning of the new decade, due to fears of recession, many speculative positions on interest rates were taken, such as those of Caxton Associates and Moore Capital - whose earnings are respectively 7% and 6% since the beginning of the year - who bet on a lowering of bonds yields. At the same time, funds with strategies seeking to profit from small differences between similar US Treasuries, or Treasury futures and Treasury bonds, registered considerable losses when the spread, instead of narrowing, got wider. Other managers were betting on the price of oil which, by losing 60% of its value since the beginning of the year, led funds – such as RCMA and Andurand Capital - to enjoy substantial gains from their short positions.
​
Despite the individual profitability of each fund and the singular position undertaken, the industry is suffering from investor outflows - which occurred in 13 of the last 17 quarters - and the number of funds has been plunging for five years in a row. Moreover, concerns about the fees, which have been emerging among investors during the years, are now rising as the industry’s ability to generate profits has been decreasing, leading to put apart the traditional “2 and 20” structure for fees which delivers 2% of AUM and 20% on profit to managers. 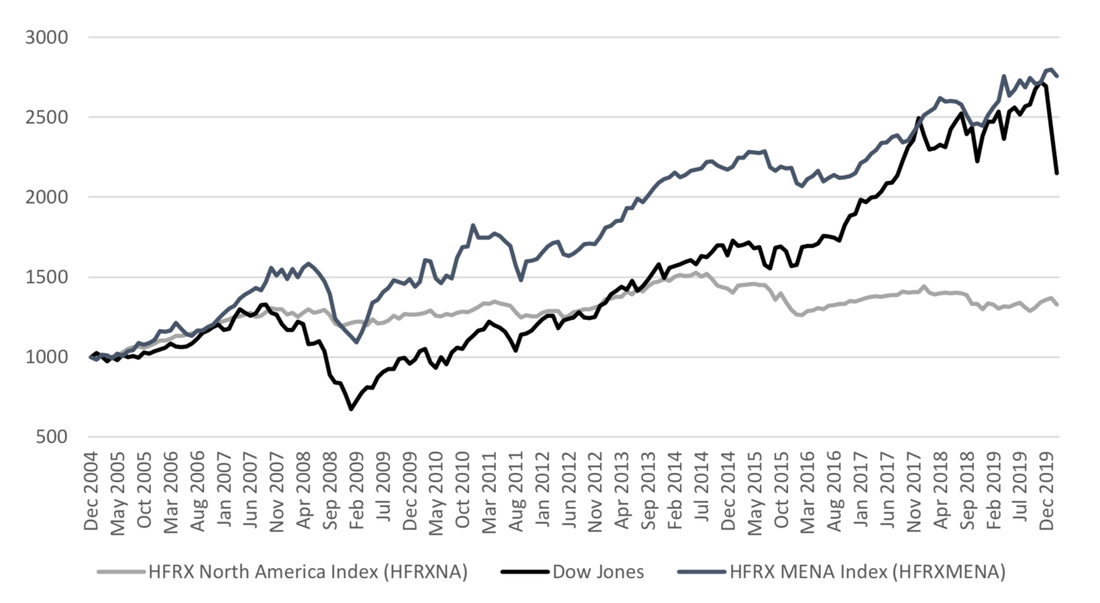 Source: Hedge Fund Research
The current crisis, following the outbreak of the coronavirus, will therefore stand as an unplanned and probably last possibility for managers to show their ability to investors, in a situation which, according to the head of a US hedge fund “it feels like strapping on a flak jacket and jumping on hand grenades going off every day”. In fact, many funds are suffering from unprecedented unprofitability, as on average they lost 9% of value starting from the beginning of the year. In particular, as markets are into bear territory, funds with considerable positions in equities, such as Bridgewater Associates - whose eight core portfolios registered negative returns for the year between 9% to 21% - and Third Point, are suffering from losses close or even worse than those experienced in 2008. Moreover, given the downturn of the airline market, hedge funds such as Lansdowne, who believed on the undervaluation of airline companies, are facing massive losses, as can be deduced by the drop of 20% in the S&P Airlines Index since the beginning of February.
​
Moreover, since the first fears of the virus were spreading across Wall Street, hedge funds - according to Société Générale - have liquidated their long positions on commodities for $35.9bn in only 15 days between January and February. Moreover, funds have rushed to sell their investments in securities bought with debt. Therefore, in a market that seems to be highly volatile, in which the traditional links between bonds, equity and other securities has disappeared, and in which regulators - in countries such as Italy and China - and have banned short selling, where hedge funds will invest their money now is in reasonable doubt.

Nevertheless, hedge funds are steering their traditional investments. Some managers are adopting a strategy known as “stay at home trade”. In more detail, it entails investing in firms that will increase in value due to governments’ acts limiting citizens’ mobility, such as delivery firms, fast-foods and online retailers. Other funds, such as Saba Capital Management which gained 33 per cent this month, are going to channel their funds in betting on defaults of firms with a substantial amount of leverage on their balance sheet, in particular high-yield and junk bonds.
​
On the contrary, Kink Street Capital Management will invest in securities of healthy companies which have seen their value eroded due to sentiment, rather than for reasons linked to fundamentals. Moreover, TCI and DE Shaw funds are seeking money from investors in order to buy at low prices to deliver substantial gains in the long-to-medium term. Given also the enormous stimulus offered by several central banks, some fund managers strongly believe that asset prices are at the moment too influenced by sentiment, not respecting fundamentals. Other managers are betting on volatility increases and on arbitrage techniques arising from price discrepancies which emerged following the sell-off.
​
However, given the significant outflows the industry is facing, equal to $97.9bn in 2019, of which $16bn in December, an increasing concern for fund managers remains liquidity, now under sever threat.

Source: eVestment
Therefore, it is reasonable to conclude that the outbreak of the virus brings managers once again to court, ready to be judged by investors who are increasingly demanding higher performance and lower fees.