​How the new Euribor may help families  with variable rate mortgages

The new way of calculating the Euribor will restrain the fluctuation of interest rates and reduce the risks of variable rate mortgages.

The Euribor (short for Euro Interbank Offered Rate) is based on the interest rates at which a panel of European banks (banks with the highest volume of business in the Euro zone money markets) borrow funds from one another and it is determined and published at 11 am (central European time) each day. It is important because this rate provide the basis and prices for all kind of financial products such as rate swaps, interest rate futures and variable rate mortgages. To be correct, there are 8 different Euribor rates, all with different maturities (see current Euribor rates below for an overview).


​
​​
​In the last few years, the value of the rate has been stable, even negative because of quantitative easing policies adopted by the ECB. But things were not the same about 10 years ago, when volatile swings put in difficulties many debtors with their banks. Probably for this reason the idea of reforming the calculation process is particularly delicate. However, to see rising rates, it will be necessary to wait until 2019 since the removal of the monetary stimulus- that reduced the Euribor below zero- will be extremely gradual.
The new way of calculating the Euribor is, at least from now, just a draft aimed at keeping the rate more bound to reality compared to the actual Euribor which is artificially built.

This would be beneficial because, for example, according to Roberto Anedda (Marketing director of mutuionline.it), determining the rate according to a period average rather than a single daily value, would make it easier to predict variation in the short term and would guarantee a more reliable and not too volatile rate. For this same reason, variable rate mortgages related to the Euribor were introduced in the first place.

However, approximately 62% of Italian variable rate mortgages continue to base the calculus of the amount of each rate on a single daily value of the Euribor, generally the first or the last one of the month. Thus, the interest component of each payment is not only determined by a real and predictable economic trend but also by hazard. This may not seem particularly significant, especially in this period because of the low and stable recent value of the Euribor, but if we compare the maximum and minimum values of the Euribor with the average of each month, we may find significant differences in the past. 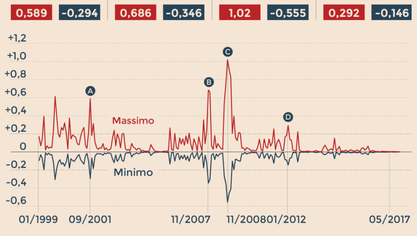 As you can see from the graph below, where the red (and blue) line express the maximum (and minimum) value achieved by the Euribor in each period, the spread maximum-average was of 1.02 % on November 2008 (Lehman Brothers crack). This mean that if you were to fix the rate on that moment you wold have paid 1.02% of interest more than a person whose rate was calculated on the average of the Euribor. This has determined difficulties for families who could not face the excessive fluctuation of the amount of each rate.

Difference maximum(minimum) value of the Euribor with the average,      Il Sole 24 Ore.
​


Therefore, having a mortgage with a variable rate calculated with the average rather than a single observation of the Euribor can make a big difference.
Even if recently the problem doesn’t seem relevant because the Euribor differs little from the average, the European supervisory authorities (ECB, FSMA, ESMA) and the 20 banks which are part of the panel tried to develop a new calculus scheme that would reduce this difference. It is important to achieve this goal before we go back to an economic normal situation, once the monetary stimulus will be over.
This new hypothesis has been elaborated with the contribution of the European Money Market Institute (EMMI), that until now daily processed the Euribor according to the information concerning the interbank rates received by the “panel banks”. The principal aim was to find a solution only based on real transactions. However, EMMI declared that the transactions are not enough to guarantee a reliable index. Thus, a hybrid system has been proposed: when transactions on the markets are not enough, the old style calculus will be adopted.

How does it work?
Before 10.45 of each working day the banks of the panel have to communicate to the EMMI the rates they consider a primary bank is lending to another primary bank in the Eurozone for each maturity (1, 2,3 weeks and from 1 to 12 months). Between 10.45 and 11 the rate can be corrected by each bank. At 11.00, the highest and lowest 15% of all the quotes collected are eliminated. The remaining rates will be averaged and rounded to three decimal places.

How will it work?
The rates will be calculated according to the operations really concluded between the 20 banks for each maturity. The real change is that, in case the result is not significant, the observation would be extended to all the lending systems (overdrafts, repurchase agreements…) even with different maturities in order to determine all the necessary rates. Only in the third place, the expert judgement will be relevant and the declarations of each bank of the panel will be asked.
With this little change, the difficulties for families with variable rate mortgages could be highly reduced thanks to a restraint of the variable rate fluctuations and differences with the average of the period.