How the personal business of Amazon's CEO is affecting the company

After Jeff Bezos and wife MacKenzie announced their divorce in early January, the market has been wondering what the future for the world’s most valuable company would be like.

Currently, 16.3% of Amazon’s stocks are owned by CEO and founder Bezos, making him the largest shareholder, but this condition may change due to divorce settlements. The state of Washington, where the family lives and Amazon is based, is a community proper state, which means assets gathered during the marriage, in this case $137 billion, must be divided equally. Given that Amazon launched one year after the couple got married, the rule would likely apply, and he may have to sell off or transfer half of his stake in the company in order to fulfill an equal split for the divorce. These actions would necessarily lead to a reduction of the executive’s control over the company and a hard fall on the share price. However, not all investors are so concerned about the announcement and its effects on the share price: many believe the company would not be as successful without Bezos on the lead, and this would not change even with a reduced stake.

"At the end of the day, we get back to the fundamentals of the company, irrespective of what executives are doing," said Ron Josey, internet analyst at JMP Securities. "I would be surprised if it had a negative impact on Amazon. It's such a large business with a lot of different opportunities and operation... there's a lot of support here."

As a result, soon after the split announcement, Amazon’s shares went up slightly, which may be linked to the way Bezos phrased his message - stressing the good relations and sense of fondness between him and MacKenzie.
In the last month, the online retail giant has reduced its market cap to about $793 billion and has underperformed the broader market with a return of -4.91%, compared to 5.11% of the S&P 500. Also, two of the stock sectors which the company is linked to, consumer discretionary and technology, performed as much as 12% better than Amazon during this period. In addition to divorce discussions, the reason for such underperformance may be due to last week company’s warning of increased spending on new investments and slowing growth in the following year. It is worth pointing out that the major tech companies, Amazon included, underwent overall falls in their stock prices in the last month, so we can exclude a link to the divorce as regards those shifts. 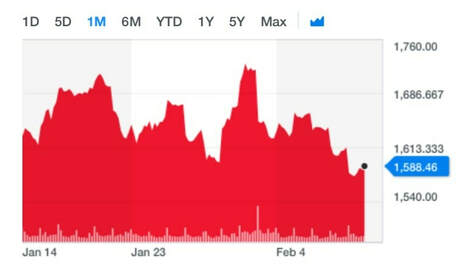 Source: Yahoo! Finance – Amazon.com, Inc. (AMZN)
In addition, another scandal hit Bezos last Thursday: the “extortion and blackmail” attempt of the publisher of the National Enquirer, which allegedly threatened to release compromising personal photos and details of the entrepreneur’s extramarital affair. The tabloid had previously obtained and published photos and texts exchanged by Bezos and his mistress, and the billionaire has investigated on the way the newspaper had gathered the information ever since. In exchange for the private pictures, the National Enquirer requested no more intrusion on the way it obtained its private information and a public statement by Bezos asserting the tabloid was not politically moved. However, the threat attempt failed, as Bezos accepted to pay the “personal cost and embarrassment” in order not to bow to the blackmail. Analysts covering the company didn’t seem to be affected by the news. ​

"I don't think the allegations have a direct line into the fundamentals of Amazon," stated Anthony DiClemente, internet analyst at Evercore ISI. "Certainly, from a public relations standpoint, I don't think it's ideal. When you look at the fundamentals, it's hard to imagine it will have a negative impact."

As regards the future, there are analysts who are setting target prices for the stock at as much as $6.000 to $10.000. Since the current price is $1.588, what is the reason behind such huge prediction?
The P/E ratio of the stock, as of October 2018, was 138 - the second highest among the FAANG stocks - and the annualized revenues growth rate has been 25.97% over the past three years. There are definitely reasons to believe the company will continue growing and entering new markets in the following years, hence the prediction of strong increases in the stock price.

All these figures show that the share has been impacted by the recent happenings but there is reason to believe it will catch up quickly and grow stronger.