How the US ban will affect Huawei in global tech sector

Huawei Technologies, the Chinese multinational technology company, has gradually become one of the world’s biggest smartphone and telecom equipment maker. Over the last months, however, it has been affected by a juddering halt.

On August 17, the US Commerce Department’s Bureau of Industry and Security (“BIS”) has imposed new restrictions on exports to China, in alignment to the operating guidelines of President Trump. From then on, all non-American suppliers of Huawei across the world will have to stop shipping their products containing U.S. technology. In order to maintain business with the Chinese tech champion, those suppliers will need a license given by the U.S. Commerce Department.

Due to this decision, many vital components of Huawei's operations are affected, from key semiconductors to displays to camera lenses, and even printed circuit boards. According to the chairman of Nanye Technology Wu Chia, since electronic devices are very complicated, it is not possible to assemble complete devices such as laptops and smartphones without any one of the components.

Furthermore, Su Tze-yun, director of Taiwan's Institute for National Defense and Security Research and a supply chain expert, declared that even though Huawei could find some low-end alternative components, that could produce much less competitive final products, decreasing the company’s competitiveness even back to where they were 10 years ago.

Why is the U.S. cracking down on Huawei?

Huawei's rapid growth and its relationship to the Chinese government have long been an important concern for U.S. In particular, President Donald Trump has identified the Chinese corporation’s business as dangerous, as it could use its control over telecommunications infrastructure to intercept data from individuals, corporations and government. Furthermore, as well as potentially facilitating intellectual property theft and cyber espionage, Chinese integration into Western projects for new critical national cyber infrastructure would give China the upper hand in any potential cyber war.

For these reasons, on May 2020, the U.S. placed Huawei on the trade blacklist called Entity Lista to limit the employment of American technologies and enforced its U.S. suppliers to obtain government licence to ship to Huawei. Washington tightened the screws further and restricted even non-U.S. manufacturers such as Taiwan Semiconductor Manufacturing Co., the world's largest contact chipmaker, from building any products for Huawei and its chip designing arm HiSilicon if they used American equipment.

Furthermore, the U.S. has recently introduced the third wave of crackdown on Huawei, forbidding all suppliers that use American technologies from selling to Huawei without an authorization.

How will Huawei's phones be affected?

So far, in the smartphone business, Huawei has shown resilience against the U.S. clampdown and over the April-June period, Huawei even overtook Samsung becoming the world's biggest seller of smartphones.

​However problems are piling up and analysis made by Nomura Securities confirmed that Huawei's mobile business faces huge uncertainties. The corporation has already suffered in the European market, where its sales dropped 16% in the April-June period, while Samsung and Xiaomi enjoyed 20% and 48% year-on-year growth, respectively.

If the U.S. did not ease the restriction, Huawei expects to start losing shares even in China and its smartphone shipments could plunge from 195 million units this year to only 50 million units next year.

What about the rest of its business?
​
Huawei's telecom gear business has been a leader of its operations for decades, and it plays a fundamental role in helping China's major carriers to build 5G infrastructure. However, The pace of 5G installation in China, was reduced as Huawei tempted to renovate and remove as much as American elements from its products as possible. 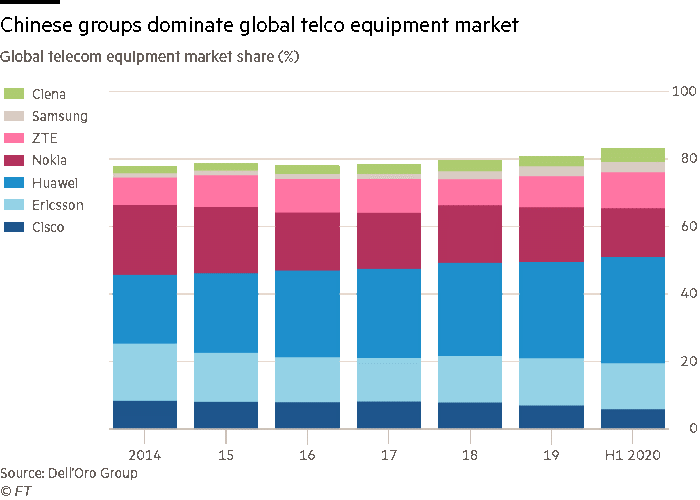 Huawei controls 28% of the telecom equipment market and it is the world's largest telecom network equipment vendor. Therefore, according to Stephane Teral, a telecom analyst at LightCounting market research, the largest customer of any of its suppliers around the world will predict tremendous collateral damage.
Outside China, many countries, such as the United Kingdom, have decided to limit the adoption of Huawei equipment. If the company can no longer bolster sales, the beneficiaries of their loss are likely to be Samsung, Ericsson and Nokia, as well as several Japanese suppliers including NEC and Fujitsu.

What other opportunity does this offer to rivals?

Already being its main competitor in the smartphone business, Samsung is becoming also an aggressive newcomer in the telecom and networking gear business. Because it was already gaining market shares in key markets such as Japan and the U.S., and gaining traction in many other markets, the Korean company would benefit the most from the slow-down of Huawei.  Furthermore, Samsung's $6.7 billion deal with Verizon will push the company in the top rank supplier category along with Ericsson, Huawei and Nokia.

Meanwhile, all rival Chinese brands like Xiaomi, Oppo and Realme are expanding their share in European markets. In particular, since the home market is dominated by Huawei, Xiaomi’s strategy has been very aggressive overseas. However, an analyst at the Taiwan Institute of Economic Research explained that Xiaomi could easily reclaim market share in China if Huawei cannot roll out as many smartphones as it used to.

Nomura foresees that next year all of Huawei's rivals from Samsung, Oppo, Vivo and Xiaomi, to Apple will obtain  20 to 30 million units each from the embattled Chinese company's smartphone shipments, but these plans may not realize due to macroeconomic uncertainties. The analyst said that Samsung and Xiaomi are more aggressive than other players in placing more orders with supply chains.

Could the situation for Huawei change after the US election?

Despite the presidential election on the 3rd of November, analyst predicted that the competition for tech supremacy between the world's two biggest economies will not change.

On the other hand, Biden has publicly judged Trump's trade war as detrimental for the U.S. economy. If elected, Biden proposed to work closely with allies in order to create a united front to pressure China on different issues, but he would also be open to cooperate with Beijing on global challenges.
​
Many executives and administrators regard a Biden presidency as more opportunities for dialogue with China and there may be room for Washington to ease restrictions on some consumer electronics products less pertinent to national security and core areas such as and AI and 5G networks.