The European Apparel Industry’s Response to Covid
Following a tumultuous year of negative profits and even bankruptcies, the European apparel industry has undoubtedly taken a significant hit. How exactly has the industry been impacted by the pandemic, and what is the market outlook for the upcoming years?

The Fashion Industry - an Overview
The apparel industry, particularly its luxury-oriented majority in Europe, is under the umbrella of consumer discretionary goods. Selling non-essential items, the financial success of the industry and companies making it up is heavily dependent on the wellbeing of the economy. As individuals amass excess income and build wealth, spending on apparel increases, leading to industry growth.

The effects of the pandemic on the luxury goods industry are reminiscent of what occurred following the Global Financial Crisis in 2008. After a significant decrease in national GDPs, the European economy has slowly started to recover, mirroring Asia, which has managed to maintain substantial growth, contributing to the broad increase in consumer purchasing power. Following this increase in consumers’ disposable income, the apparel industry experienced significant growth over the past decade; in 2017 the industry sales rose by ~22%, and ~12% in 2019, which are both considerable figures for the European market.

However, being dependent on the state of the economy presents a major downside to the European fashion industry - its reaction to economic setbacks is rather extreme, when compared to other industries.

The Impact of the Pandemic on Industry Performance 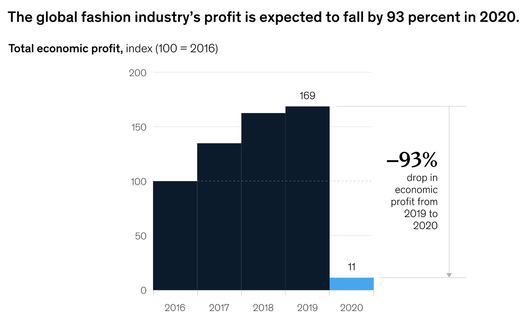 Source: McKinsey Global Fashion Index
As the pandemic took over the world, leaving many citizens without a job, and forcing those willing to consume to remain inside their homes, a setback was experienced. Many companies were financially impacted by these large losses as early as the second quarter of 2020. The production in apparel dropped by a staggering ~40% as a response to the meager sales, which collapsed by 44% in Q2 2020, according to Statista. Despite increased optimism of the summer months, as lockdowns eased and economies opened back, clothing sales were still down 17.4% in 2020 compared to the previous year. 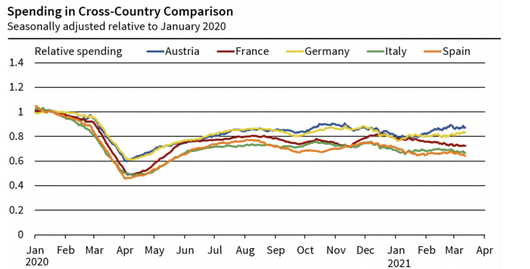 Source: N26, calculations by the ifo institute
Overall consumer spending in several European countries has halved, or come close to halving, around April 2020 and has not yet recovered fully 12 months later. While the quick recovery from -50% to -20% of overall lost sales might implant hope, the reality remains dull for the fashion industry. A study conducted by McKinsey states that “pre-crisis levels of activity are unlikely to return before the third quarter of 2022.”

Interestingly, even as revenues decreased, certain companies were able to maintain a strong position on the equity markets. For example, the shares of the French conglomerate LVMH (Ticker: MC.PA), are up over 80% to-date since the low of March 2020. This is astonishing, for a company whose revenues have decreased by 17% in 2020 relative to 2019, and profits by over 35%, but it can be attributed to the company’s resilience throughout the pandemic, as well as the completion of the long-awaited purchase of Tiffany & Co., one of the biggest jewelry brands in the world.

Fashion, which has relied heavily on its brick-and-mortar mode of operation, has been coerced into adjusting to the new, digitized way of living that is the new norm for consumers. In fact, and quite obviously so, some of the best performing European Apparel & Fashion companies in 2020 have been those relying primarily on e-commerce sales, such as ASOS, and Zalando. Following the trend, a large number of companies undertook significant investments into digital sales, and implemented cost-cutting strategies, usually manifested by store closures.

Overall, according to Statista the Europe Apparel industry is predicted to rebound by roughly 15% in 2021, as consumers regain confidence and manage to obtain a higher amount of disposable income. Furthermore, it is expected to grow by over 50% in total starting from 2021 until 2025.

Conclusively, there is no doubt that the European Apparel industry has suffered in the past 15 months. As consumers lost income and were forced to remain indoors, companies struggled to maintain profitability. Despite some strong players like LVMH and Asos, who have managed to contain, or even benefit from, the impact of the pandemic, the overall industry is worse-off than before. With little hope of recovering sales to pre-pandemic levels before 2022, brands and manufacturers must adapt their strategies to better suit the digitized ecosystem, and minimize the costs brought by the heavy dependence on brick-and-mortar stores.