The idea of shareholder primacy has been the undisputed norm since Milton Friedman popularized it in the 1970s. Furthermore, executive compensation has been structured as to reward short term behavior. In turn, these factors have led to executives who are focused on maximizing short term profitability and stock price. For instance, one study showed that 62% of the companies surveyed used TSR as a performance metric. Other commonly used metrics to determine executive compensation are EPS, revenue growth, and operating income. The issue with the use of these metrics is two fold, it impacts both shareholders and other stakeholders. On the one hand, the use of metrics such as revenue growth or EPS may lead to the maximization of this metrics at the cost of long term performance. Thus, it is common for executives to decrease spending in activities such as R&D or advertising in order to maximize short term profits. It is also common to try to grow revenue regardless of whether that growth is NPV positive or not. These practices lower the future cash flow generated by these companies over the long term and, thus, are detrimental to shareholders. On the other hand, this focus on the maximization of short term profits leads companies to disregard the environment, squeeze suppliers to minimize working capital, and engage in planned obsolescence (among other practices). These actions are mostly caused due to the incentive structure currently in place, and it has led to a divergence between the goals of stakeholders and executives. 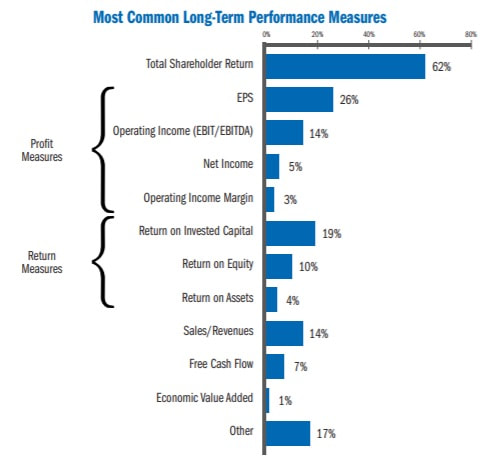 Source:Standard & Poor’s Capital IQ.
From 1976 to 2015 there was a major shift in the mentality of shareholders of public companies. The average holding period in the United States decreased from 5 years to 7.3 months over a period of 30 years. In turn, the concept of shareholders as the owners of the business becomes somewhat blurred. The decrease in holding period points to the rise of speculators as shareholders. One flaw of the agency theory is that due to the characteristics of a limited liability corporation and the rise of speculators, the shareholders aren’t as accountable as owners would be. Given that the shareholders aren’t liable for any actions of the corporation, it isn’t reasonable to ask that the managers have only these owners in mind (who have upside but no downside). 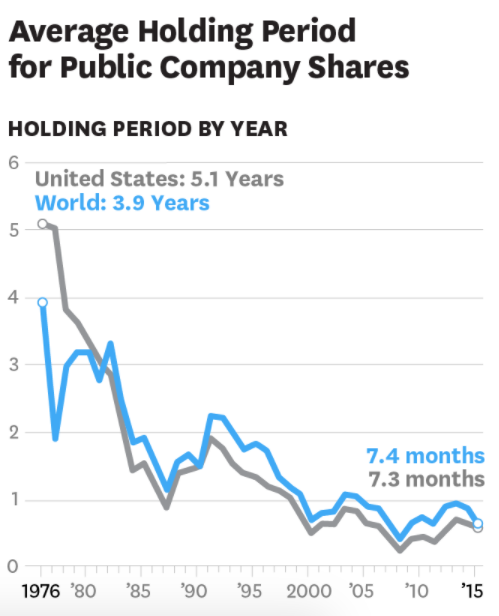 Source:Harward business Review
One instance that highlights the relevance of those perverse incentives is the case of Valeant. The company ran a roll up strategy between 2008 and 2015 where the primary form of value creation was due to its pricing power. Valeant acquired companies after identifying that those had drugs that were so vital as to have a nearly price inelastic demand. After acquiring these drugs the company would raise prices and lay off employees. The executives had their compensation mostly in stock options tied to the creation of shareholder value. The CEO of Valeant confirmed this by mentioning that “Those of you who know us know all we care about is shareholder value”. This quote, among many others, points to the fact that the underlying philosophy of the company was supported by a deeply held belief in shareholder primacy. That, however, came at the cost of the employees, suppliers, consumers, and other stakeholders in the company.

Despite the aforementioned issues, over the past decade there have been improvements in the way that executives are compensated. For instance, there has been a move away from stock options to stock grants. Since 2006 stock grants have roughly doubled as a percent of total compensation. Generally, stock options create more perverse incentives due to the fact that the CEO has no downside whilst having tremendous upside. The CEO is essentially incentivized to increase the short term stock price at all costs, which may lead to employee layoffs or a decline in the financial health of the company in the long term. The lack of downside may also lead to undue risk taking. On the other hand, stock grants are longer term in nature due to the extended vesting period and also presents both a downside and upside. Thus, CEOs whose compensation stems mostly from stock grants are less likely to take significant risks or focus on short term profitability. 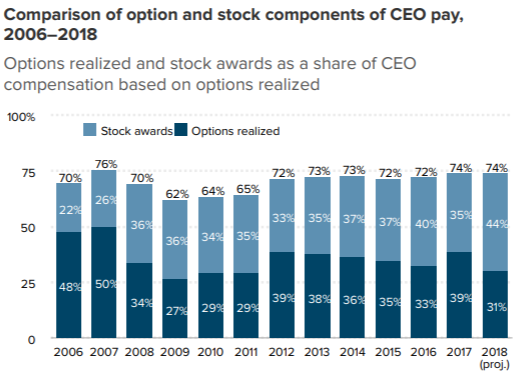 Source: Compustat’s ExecuComp database, the Bureau of Labor Statistics’ Current Employment Statistics data series, and the Bureau of Economic Analysis NIPA tables
In an age in which many members in society vow for a more conscientious system, stakeholder capitalism has an opportunity to be implemented. In order for there to be change, there must be a fundamental change to the underlying incentive structures that guide corporate America. The Long Term Stock Exchange (LTSE) has the goal of tackling the misalignment between the management and stakeholders. Another major issue which the LTSE attempts to tackle is earnings guidance. There is a pressure on CEOs to provide earnings guidance to Wall Street and to beat that guidance every quarter. The goal of the exchange is to eliminate that common practice which only leads to short term thinking and pressure to take actions that are detrimental to all stakeholders. The Coronavirus pandemic has led 86 companies in the S&P 500 to suspend guidance. Even though this is most likely a temporary change, some of the most respected CEOs (Jamie Dimon and Warren Buffett) have proposed that the practice stop all together.This will be done by creating listing standards that require executives to act in accordance with the exchange’s principles. The LTSE requires the companies listed on the exchange to publish five policies regarding: Long-Term Stakeholder, Strategy, Board, Compensation, and Investors.
Even though the issue of shareholder primacy has been debated for years it is alarming that little has been done to make stakeholder capitalism a reality. The proposal of the LTSE is a good first step that will make corporate America take responsibility for its actions. In the end, true shareholder primacy is stakeholder capitalism, since companies like Valeant can only exploit stakeholders for a limited period of time. Companies that want to thrive over a long period of time in a capitalist system should understand that they may only do so by creating value to all stakeholders.