India’s digital payments market: who will triumph in the battle between Google Pay, WhatsApp, Paytm and local challengers?

India’s digital payments industry is a $200 billion market that has been increasingly gaining world’s attention. According to Credit Suisse, the market is expected to grow fivefold and reach $1 trillion by 2023. First mover, Alibaba-backed Paytm is the leader in the industry with a total of 350 million users, however it is facing threats from Walmart’s payments venture PhonePe, ready-to-launch WhatsApp Pay, and Google Pay, which leads in the payments via new UPI technology. As competitors are looking for different strategies to start making profits and secure market share, the competition is getting only fiercer.

Since Alibaba’s significant investment back in 2015, Paytm has significantly developed the scope of its offerings. The company now offers prepaid mobile recharge services, various bill payments, payment solutions for businesses, ‘Digital Gold’ platform that allows to trade gold, and the trademark ‘Paytm Wallet’ that allows unlimited offline payments via smartphone by scanning QR code in the store. The firm has also introduced a digital bank function where users can create mobile saving accounts and receive interest on their savings. ‘Paytm Bank’ accounts are based at Paytm partner banks and the company receives commission for bringing in the customers. Given its extensive offerings, it comes as no surprise that Paytm has about 70% market share in the industry and more active monthly users than its two main competitors combined (Exhibit 1). The firm is still yet to reach profits as it has recorded a $549 million loss in last financial year (2018-19), however, none of the competitors have yet come out of the red zone either. The company, currently valued at $15 billion, is closing another round of funding that is expected to bring in another $2 billion. According to PwC India partner Vivek Belgavi, the company might attempt to battle rising competition by “expanding both the offline merchant base as well as use cases like transportation and telecom”. Paytm is also looking to grow internationally and launch in Japan and Canada. 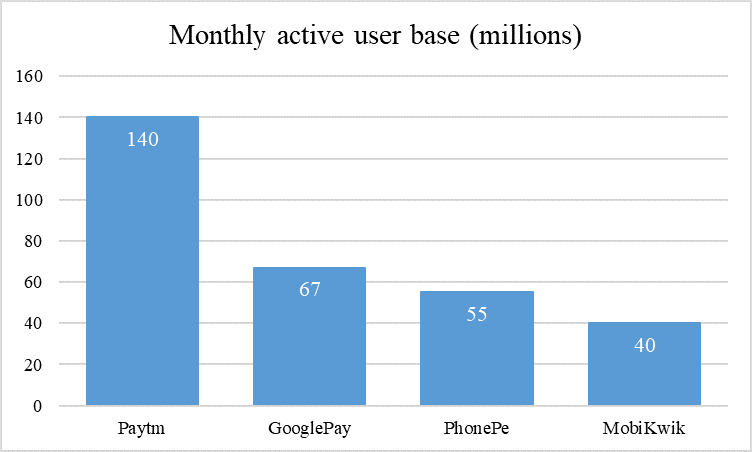 Google Pay entered the market in 2017 after India’s National Payments Corporation (NPCI) introduced a new payments technology – Unified Payment Interface, or better known as UPI. UPI creates a digital address for every user at any bank in the country and allows instant money transfer upon a PIN confirmation. Google Pay, initially branded as ‘Tez’, like any other UPI-enabled application, allows free transactions to any UPI-registered users and in-store payments with QR code scanning. Google’s name has spurred a growth in the overall usage of UPI technology which has reached 900 million transactions in August. The company has a leadership position (Exhibit 2), but in the context of the entire digital payments market captures only about 5% market share. This is because UPI transactions have an upper cap on the transaction value and constitute only a small portion of the market by value. Safety concerns regarding low level of user identification, which is only a phone number for registration and PIN code for usage, are causing further concerns. 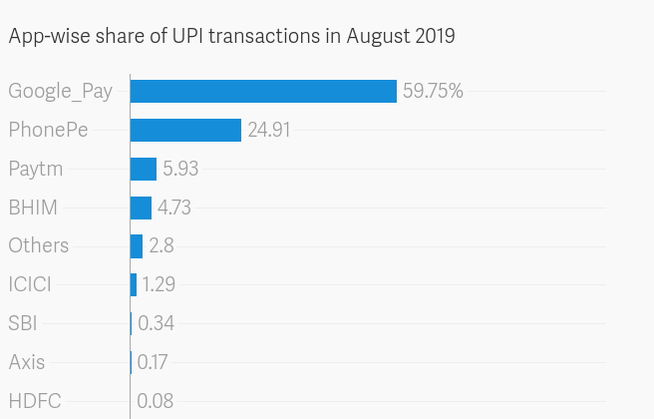 Seeking to embrace the issue and attract more customers, Google Pay has announced in September that it will pursue a ‘super app’ strategy which means the integration of other platforms into the regular payment system thus allowing user to perform multiple functions without leaving the app (popularized by WeChat). The new Google ‘Spot’ platform allows the integration of online merchants’ stores where customers can browse, order and reach out to the businesses while on the app. However, competitors Paytm and PhonePe already have similar functions on their digital wallets and Amazon Pay has made a lead towards the strategy by acquiring app-bundler Tapzo this August. Therefore, it seems that the most prospect for Google Pay market share expansion lies in the further growth in UPI-based transaction, rather than successful ‘super app’ strategy.

​India’s venture launched in 2015 and was the first one to integrate UPI technology before Google entered the market. Besides the traditional digital wallet, it went on introducing some of the functions that Paytm offers like utility and bill payments, gold purchases and insurance, as well as including some of the ‘super app’ features. The company is valued at $7bn and controlled by the electronics’ retailer Flipkart, which was acquired by Walmart in 2018. Walmart is now considering to spinoff PhonePe which would give the company more flexibility and freedom to pursue its own development.
$111 million loss in 2018, which has only increased since 2017, is urging PhonePe to look for ways to improve profitability. In his statement, CEO Sameer Nigam has revealed that he is looking to expand the business into the broader financial services sector. The digital startup is looking to get into areas like insurance, lending, wealth management and mutual funds. Taking from Alibaba’s example of a successful spinoff of Ant Financial, Walmart is getting into India’s fintech field with bright optimism and digital payments may be just a platform for a broader success.

​WhatsApp – the entrant that can change everything

WhatsApp has been attempting to introduce its payments extension in India since 2018 and now, after complying with local regulation, the payments function will officially launch by the end of 2019. WhatsApp user base in India is around 400 million, which is slightly more than the total user base of Paytm (350 million). Without putting any extra cash, the new entrant will already have the largest user base in the country. Comparatively, China’s WeChat has 1 billion monthly users and around 80% of them are also actively using WeChat Pay. WhatsApp potential is enormous.
Does this mean that all the other competitors will be forced to helplessly succumb to the growth of WhatsApp Pay? Likely not, and that is mostly related to the depth of the industry and the technology WhatsApp chose for its development. Like Google Pay, WhatsApp Pay is based on UPI and as already mentioned earlier, a significant part of the population is still worried about the security of the system. However, WhatsApp’s younger audience with naturally lower levels of accumulated wealth may not care about the security that much. This proposes a potential market segmentation where higher earning 30-45 and older age groups with their already formed financial habits may choose to stay with traditional digital wallet providers like Paytm and PhonePe, while the under 30 group would be taken over by WhatsApp. Given the significantly smaller average transaction value in the youth group, it is likely that Paytm will retain its leadership by the value of transactions. WhatsApp’s entrance is thus a largest threat to Google Pay which offers very similar UPI-based service. Knowing that what attracts customers to UPI at the first place is convenience, WhatsApp will most likely be the #1 UPI-based digital payments provider already by the end of 2020.
But the rapid growth in the market means that there is enough room for WhatsApp’s growth without significantly undermining other more diversified or niche competitors. If the current players succeed in converting all the growth and optimism into profits, we might see the competition getting even fiercer in the next few years.