Interest-only loans and the threat of massive write-downs ​

An interest-only loan is simply a loan that collects interest-only payments, rather than amortizing (paying down the principal). Interest-only payments may be applied to a specific period of a loan, usually at the beginning, or may apply for the entire life of the loan. Many bridge lenders and debt funds typically only require interest to be paid on the loan until maturity, when they will collect on the entire loan principal. This is referred to as “full-term interest only”. These risky offerings fall under the umbrella of non-qualifying loans, meaning they do not conform to standards set by the Consumer Financial Protection Bureau. ​

One popular loan is the interest-only adjustable rate mortgage, with which a borrower pays only the interest for a period before the rate resets and principal becomes part of the payment. Interest-only mortgages are surging in popularity with commercial landlords across the US, fueling fears of a return to crisis-era loose lending and a spike in defaults if the economy takes a dip.
Interest-only mortgages accounted for 77 per cent of the loans backing $16.5bn of new commercial mortgage-backed securities in the US during the first quarter, according to data provider Trepp, up from 68 per cent a year earlier. Combined with partial interest-only loans, which allow borrowers to pay just the interest for an initial period, the total reached 89 per cent of the loans backing all new commercial mortgage-backed securities in the first three months of the year. It is the highest level since 2009, and in line with levels seen in the build-up to the 2008 financial crisis.

The trend means greater risks for lenders, which face bigger losses on the unpaid principal if stretched borrowers start to default on their loans. If the economy weakens and commercial property prices begin to drop, the collateral backing the loans also falls in value, increasing the threat of write-downs that could open up big holes in lenders’ balance sheets.
The growth of interest-only mortgages is a sign of more intense levels of competition within the industry where regional banks are battling with private equity firms and insurance companies to build market share. Regional US banks — including Fifth Third of Cincinnati and Atlanta’s SunTrust — now account for 17 per cent of all new commercial mortgages, up from 11 per cent in 2013, according to data from Bank of America Merrill Lynch. Meanwhile, nonbank financial companies account for 10 per cent of the market, up from 7 per cent last year. They typically offer riskier loans, according to Bank of America.

Home equity lines of credit represents another popular segment of the interest-only loans market. In its latest Household Debt and Credit Report, the Federal Reserve Bank of New York points out that the total outstanding debt for home equity lines of credit reached $412 billion at the end of 2018. A HELOC is similar to a business line of credit.  The lender uses the house as security and provides a homeowner with a line of credit that has a fixed limit. The borrower can withdraw funds within a time known as the “draw period” (usually 10 years), during which the required payment is interest-only. At the end of the draw period, the HELOC automatically converts to a fully amortizing loan. The repayment period is usually 15 years. Because the HELOC has to be fully repaid at the end of the 15 years, borrowers can see a huge increase in their monthly payment after the draw period expired. 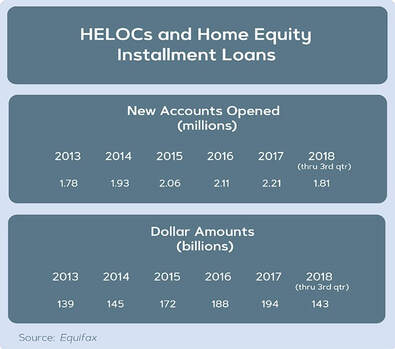 “The interest-only phenomenon is a late-cycle indicator and definitely a red flag,” said Christopher Whalen, chairman of Whalen Global Advisors. “When you are just rolling your debt and not paying principal, you are on the road to perdition”. Considering the actual uncertain economic outlook and the daunting threat of a downturn, it is clear how these loans could suffer in case of decreasing housing prices, exacerbating an housing collapse similar to 2008’s one.​