Investing ahead of the 2020 US Presidential elections

Introduction
​
​In the current environment with COVID-19 cases reaching record levels in the USA, strong quantitative easing, considerable fiscal stimulus, and an approaching presidential election, the US stock market is looking for direction. Moreover, given the historical asset correlations that were challenged by the COVID-19 pandemic, creating a balanced portfolio with a short time horizon becomes more difficult. 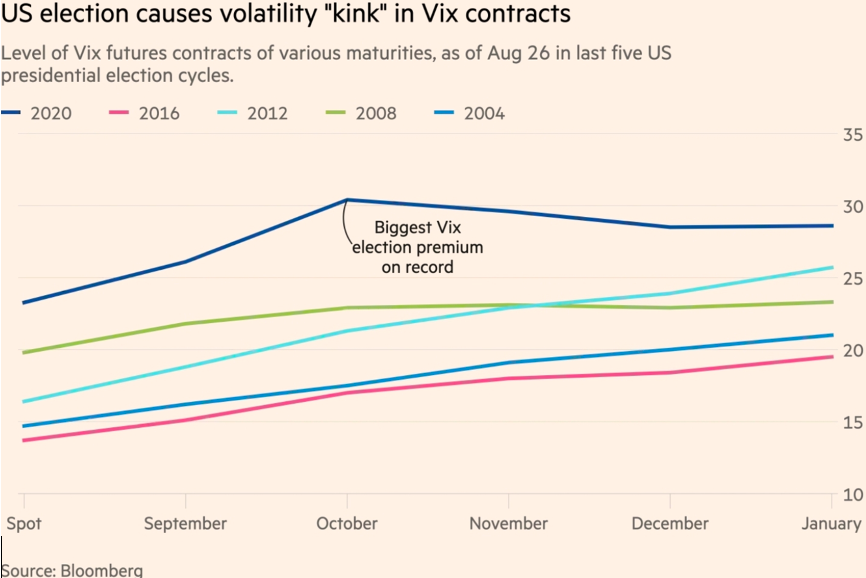 While President Trump is lagging Biden in national polls by an average of 8.4 percentage points, these polls have proven useless in 2016 when Trump won the election. Hence, alternative prediction methods seem to be more relevant, for example, Allan Lichtman’s "13 keys to White House" which have correctly predicted the presidential election winner for the last 40 years, and now predict a Biden win. Nonetheless, recent outliers such as Trump’s positive test for COVID 19 and then quick recovery could lead to a change in voter sentiment. Even more importantly, in the case of a tight election, the Trump administration is very likely to challenge the validity of some vote ballots (particularly mail-in voting) to the supreme court, and given the recent confirmation of justice, Amy Coney Barrett the now conservative Supreme court could be a major plus for Mr. Trump and minus for markets as the uncertainty regarding the election outcome will continue lingering for more. Therefore, we need to carefully evaluate the two main election scenarios: a Trump vs Biden win.

A Trump second term should push markets higher as he will likely extend the current tax cuts past 2025, decrease the capital gains tax from 23.8% to 15% and increase fiscal stimulus to make up for the economic damage produced by the COVID-19 pandemic. An important note to make here is that enacting Trump’s agenda would require Republicans to maintain at least the Senate and even increase their influence in the House of Representatives. On the foreign policy front, Trump is poised to pursue his isolationist policies continuing the trade war with China and maintaining the trade tariffs on EU goods he imposed in his first term. Also, Trump is likely to increase regulation aiming to decrease the influence of large US technology giants and foreign companies. Lastly, Trump’s focus to keep open the economy no matter the COVID-19 situation is another double-edged sword which in the short term should be see as positive for the financial markets.

In contrast to Trump, Biden aims to increase the corporate tax from 21% to 28%, the top individual income tax from 37% to 39.6%, double the capital gains tax, and tighten regulation of the financial and technology sector. These policies are expected to lead to a decrease in US economic output of 1.47% (according to the Financial Times). On the foreign policy front, Biden’s approach seems inclusive given his commitment to renegotiate trade agreements with the EU (particularly agricultural trade) and re-join the Paris Agreement. However, these measures – particularly tax increases – are likely to be imposed only if Democrats manage to maintain the House control and regain the Senate. If this does not materialize, the need for a bipartisan agreement would reduce the size of these changes. Lastly, Biden’s progressive agenda is particularly dangerous for the financial markets if Biden were to impose them too early – before markets fully recover from the pandemic and a vaccine is ready to be distributed. On the flip side though, a Biden win followed by a “blue wave” would likely lead to a fiscal stimulus aiming to increase consumer spending via direct money transfers known as helicopter money, unlike a more conventional fiscal stimulus targeting corporations – one favored by Republicans.

Implications from an asset management perspective

In the following weeks prior to this November’s presidential election, the US markets (the S&P 500 and Dow Jones) are likely to head lower due to uncertainty regarding the election’s outcome (the same way they did ahead of the 2016 election) but also due to a halted new fiscal stimulus package and growing concerns regarding a long voting period and possible hard transition – if President Trump loses and challenges the validity of the vote. This selloff is likely to continue if Biden is elected president, especially in the following sectors: energy (traditional, not alternative), consumer discretionary, industrials, and financials – which are tax-sensitive. In contrast, the consumer staples – a cyclical sector – looks attractive given the current pandemic and unknown election outcome, especially if investors focus on high dividend yield stocks. Also, with the NASDAQ index pushed at record highs by the greater usage of IT during the current pandemic, the technology sector overall is not an attractive investment especially given that more regulation is to come regardless of the election outcome. In addition, a Biden win could lead to a short-term selloff caused by profit-taking before Biden’s capital gains tax takes effect. Also, a “blue wave” leading to more fiscal stimulus could initially hurt the dollar and make gold seem an attractive hedge. However, due to central banks’ coordination of quantitative easing and governments coordinating fiscal stimulus this effect is unlikely to hurt the dollar in relation to other currencies, and hence gold remains an uncertain bet. Adding to that, given the gold’s high current price and its perfect correlation with the broad market in early March further question its status of a safe haven.  Next, on the fixed income front, the negative real yields make the US treasuries an unattractive investment. Even if fund managers could make a short-term profit from price appreciation due to the negative correlation between yields and bond prices, the gains obtained would not be enough to compensate losses caused by a stock market correction. Adding to that, long-term investors might decide to sell their positions in search of higher return investments, such as bonds in other countries or investment-grade corporate bonds. As for the hedgers, hedging the risks of the next few months could be done with derivatives such as put options. Finally, a good strategy prior to election day can be betting on higher volatility via VIX futures, which should point higher especially if election results are challenged and the final verdict delayed. And as diversification is key in this period, investing in Europe – particularly the banking sector which trades at record low levels – is a great idea. For once, it would be a geographic diversification, then the EU is stronger than in 2008 as now countries have been coordinating properly fiscal stimulus programs (such as the 750 billion euros Relief Fund), the ECB has been aggressive with QE and lastly, a Biden win could really boost the USA-EU trade.

To sum up, this November’s US Presidential elections is a big risk factor for the US markets both prior to the election day and after. Hence, combining a proper asset diversification in the US (with bets on both outcomes) together with a geographical diversification seems to be the right strategy for achieving the best investment performance in the coming months.