ION Investment Group to acquire Fidessa after a £1.5bln bid

Fidessa discarded Temenos’ offer for acquisition in favor of Ion Investment’s proposition, which amounts to £1.5bn.

About the companies
Fidessa, the targeted company, was created in 1981 with headquarters in London. It supplies software, investment and trading systems and analysis on market data. The company is listed on the London Stock Exchange and it also part of the FTSE 250 Index.
Temenos is a Swiss company that provides software for banks and other financial services. It was created in 1993 and it has its headquarters in Geneva. It is also listed on the Swiss Stock exchange.
Ion Investment was founded in 1999 by Italian-native Andrea Pignatoro, who was a bond trader at Salomon Brothers. The company is headquartered in Dublin and it is one of the biggest European software companies, creating risk-management and trading software for capital markets. Ion is supported by Carlyle, a private equity group, which has enabled it to grow through a number of acquisitions, including Wall Street Systems (supplier of FX trade processing), Paysystems (supplier of trading and exchange methods for derivatives) and Triple Point Technology (supplier of commodity trading and risk management resolutions).

Deal Structure
On February 21st, Fidessa accepted an offer by Temenos, which valued the target company at £35.67 per share in addition to a dividend for shareholders of 79.7p, which amounted to £1.4bn cash takeover. However, shortly after the agreement, the deal was pressured by the investment management firm Elliot Capital Advisors, which had bought 5% of Fidessa’s shares. Initially Elliot had bought shares in Fidessa last year because it believed that the company could be managed in a more efficient way, comparing it to other financial software providers. This move increased the value of Fidessa’s shares by 7% to £38.30. Investors right then thought that Elliot’s involvement would have brought up a better bid for the company.
On April 5th, Fidessa revealed that two companies had come up with better offers: SS&C Technologies, which is a US software supplier for financial services, and, of course, Ion Investment group, which proposed a higher bid: £38.703 per share plus a 79.8p dividend to shareholders for an aggregate of £39.5, which amounts to £1.5bn. This offer was made barely hours before the deadline appointed by the UK Takeover Panel for Ion and SS&C to choose whether to propose a definitive price or to withdraw. The agreed offer puts an almost 50% premium on the price of Fidessa’s shares before Temenos’ interest in acquiring was made public. 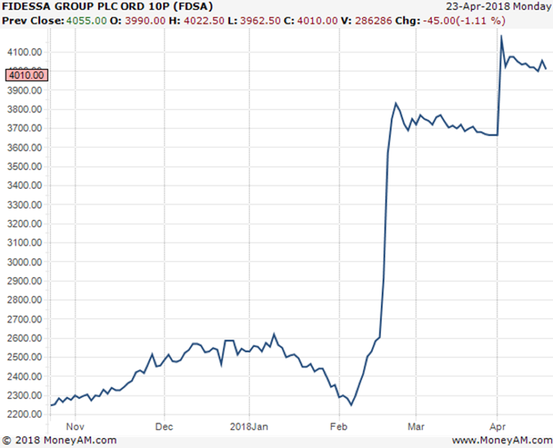 The owners of 25% of Fidessa’s shares, Lindsell Train, Evenlode Investment Management and Elliott International, have expressed their agreement to the deal with Ion.

In an official statement, Ion has said that it had been given only “limited due diligence access” and is still to undergo a strategic review of Fidessa’s statements once the deal is closed. It has been predicted that about 15-20% of jobs would be lost, a part of which out of “natural attrition”. The combined workforce of the two companies is around 3300 employees which means that there would be a saving of about £50m a year.

During the process, Fidessa’s corporate broker was Numis Securities and it was advised by Rothschild and Jefferies, while Ion’s advisor was UBS.

Now, SS&C Technologies have until May 4th to make a firm offer for Fidessa, possibly outbidding the current £1.5bln one, the UK’s Takeover Panel said. Its other option is to walk away from the acquisition which Temenos already did and it won’t make any further offers.
Dimana Tzonova