Is a Market Correction Unavoidable?

2020 was a defining year in human history for many reasons. The pandemic led to a sharp downturn in markets and the economy in March, followed by a historic and unprecedented rebound, subsequently leading to all-time highs in the markets and record valuations. Despite the valuations and apparent disconnect between the real economy and markets, many investors remain bullish on the outlook for 2021. First, they argue, we will see vaccine-led recovery in the economy that will generate growth and earnings to underpin further gains in the markets.  Second, the vast stimulus from Central Banks has pumped liquidity into the markets in epic quantities. As a result, many well-respected financial institutions have stated that US markets will end higher 2021 at higher levels, acknowledging there will be some volatility and potentially a correction along the way. Will the bull case prevail or will bears re-gain control?

There is a general consensus among investors that current valuations and P/E multiples of individual firms in the market appear to be disconnected from the real economy. From extreme overvaluation, explosive price increases and frenzied speculative investor behaviour, it is very likely that we will eventually see a market correction. Look no further than Tesla. Some of the catalysts for a market correction could be as simple as a collapse in earnings or another taper tantrum induced by potential monetary tightening as Central Banks seek to head-off potential inflationary pressures. While it may be unlikely, if there were to be a Covid-19 relapse or an escalation in US and China relations under the new administration, then the markets may react negatively. Additionally, there has been historic amount of stimulus injected into the markets, and, while this may temporarily soothe many problems related to unemployment and liquidity, eventually it will dissipate and reveal many of the underlying problems created by COVID. This excess liquidity in the markets is also driving irrational investor behaviour, largely on the part of individual retail investors, who can move markets while chasing stock prices that cannot possibly be justified by a sharp rise in market prices. All of this, say the Bears, is an indicator of a bull market nearing its end.

There are additional indicators that are signalling the market is due for a correction. One of those is the “Buffet indicator” which measures the ratio of total stock market capitalisation to GDP, which recently broke through its previous all-time high 2000 record. Robert Shiller’s CAPE asset-pricing indicator also suggests that stocks are nearly as overpriced as the 2000 bubble. It is common to see some level of detachment between the market and economy, however the current state of the global and US economy is not reflected in the markets today. Today, the P/E ratio of the market is in the top few percent of the historical range, yet the economy is in the worst few percent. The current S&P 500 10-year P/E ratio is 35.5 which is 9% above the modern era market average of 19.6, signalling the market is strongly overvalued. 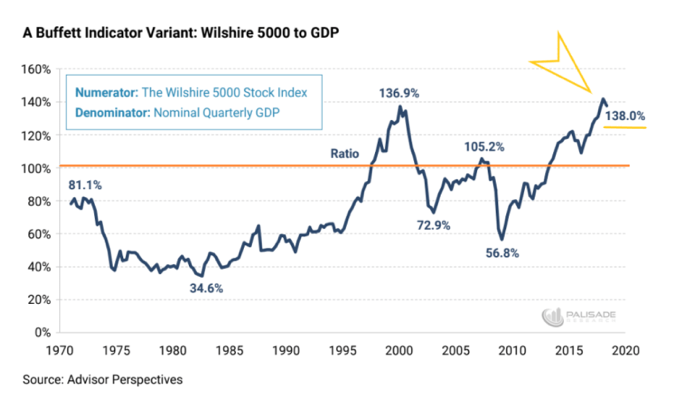 While it is reasonable to assume that a market correction is imminent based on the indicators and potentially catalysts, there are still many investors that believe the market has more room to run. This statement is largely based on vaccine progress in the US which if successful will lead to further reopening and thus support more business in recovering from the pandemic. JP Morgan Chase is confident on scope in order to growth, based on the fact that non-bank investors globally allocated 43.8% of their portfolios to equites which is higher than the average 42.3% allocation post-GFC, yet lower than the high of 47.6% in January of 2018. This 42.3% allocation is considered “neutral equity allocation” and under the high seen in 2018, hence some major investment banks see a potential upside.

A key method for identifying a market bubble is analysing the level of conviction held by the bulls as well as their behaviour. The intensity and animation demonstrated by both individual and some institutional investors, as well as the hostility toward those who are bearish is alarming, and a key indicator of a market bubble. Benjamin Graham identified this behaviour in his book The Intelligent Investor as one that is commonly seen in market bubbles, more specifically the lead up to the 2001 dotcom crash. Some of this behaviour is seen in the large number of IPO’s via a record number of SPAC’s as well as careless investing from individual investors. All of this can be seen as a classic precursor to a market meltdown.

While a continued rise in the market can be justified based on vaccine progress and economic recovery, it is not without reason to be cautious in the event a market correction occurs.  To hedge against a market correction, analysts suggest it is advised a rebalance the asset allocation to combine a mixture of value and emerging market equities while avoiding exposure to high growth stocks or tech.
The economic impact and destruction that was caused by COVID-19 will take many countries years to recover from and will change our society and financial system forever. Once the stimulus runs out, unemployment stagnates, and the general public realise the extent to the damages caused by COVID-19, the market will quickly price this in. While it is difficult to assign an exact date to when something like this may occur, it is highly likely that it will and regardless of the type of investor you are, you must prepare for the worst.