Is a revolution coming in the credit card industry?

On March 25th 2019, Apple Inc. announced the launch of Apple Card, the new credit card issued together with the finance giant Goldman Sachs Inc., that is planned for this Summer. According to Tim Cook, Apple’s CEO, the new card is going to revolutionize the current way of conceiving a credit card, and this idea is supported by David Solomon, CEO of Goldman Sachs. What pushed the two companies to team up for such a venture, and has Apple Card really what it takes to stand in front of the competition?

The move by Apple to enter the credit card business is part of the new strategy, implemented as a response to the slowing in sales of its devices, which sees the Cupertino company reinventing itself and pivoting from hardware to services. Part of the same strategy are also the launch of the video streaming service, subscription news and gaming service.

Last August, the tech giant hit for the first time $1trillion in market capitalization, becoming the first US company to do so. After the record high, however, the company had to cope with a series of troubles, especially related to the slowdown in sales which at the beginning of November led the company to stop disclosing the number of items sold. Additionally, Apple suffered large losses at year start, mainly due to the Chinese market but also to the overall slowdown of the global smartphone market, as the smartphone turnover rate is decreasing. The current market capitalization is $892.15B, 11% down with respect to last Summer record high.

These events conveyed the management team to start an internal revolution in the attempt to reinvent Apple, particularly through the entrance in the consumer service market, which would provide more recurring revenue. To do so, the US company can exploit its main competitive advantage: its wide customer base. Luca Maestri, CFO of Apple, has recently disclosed that the global active install base has surpassed 900 million devices. The idea is, in fact, to provide services through its existing network of devices. In particular, the new Apple Card would be integrated with the already existing Apple Wallet, launched in 2012, and every iPhone user could “sign up in no time and start using it right away with Apple Pay”, according to Apple website.

From Goldman Sachs perspective, the partnership with the tech guru represents a “major step” in the bank’s plan to grow its consumer business, as reported by Reuters earlier this week. The finance giant had made its first entrance into consumer banking in 2016, with the launch of Marcus, its online bank famous for offering very competitive rates on savings accounts. Marcus was a history of success, with over $45 billion in consumer deposits, $5 billion in personal loans, and now the bank is introducing its second consumer product.

Apple card will also be the first credit card issued by Goldman Sachs, marking a significant milestone in the history of the bank, which will so join the group of other major US banks that already provide this service, namely Citigroup Inc., JPMorgan Chase & Co. and Bank of America Corp. 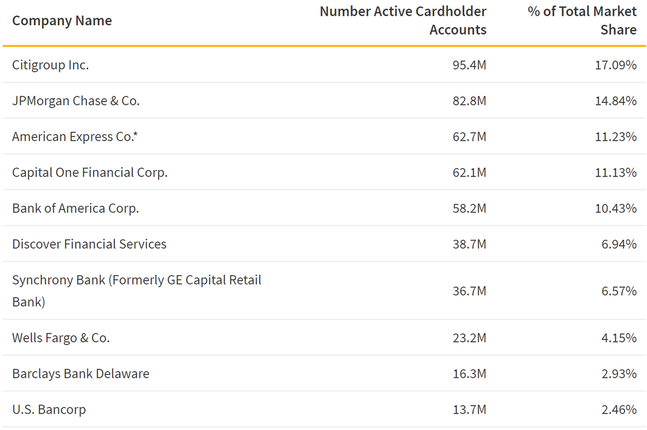 Largest U.S. Credit Card Issuers: 2017 Market Share Report. ValuePenguin. Available at: https://www.valuepenguin.com/largest-credit-card-issuers.
Despite this, analysts’ reactions were divergent. If on one side some people recognize that this can be an opportunity to penetrate the market and gain consumer market share, others would prefer “Goldman to be Goldman” as stated by Brennan Hawken, senior equity research analyst at UBS Investment Bank. Additionally, some investors are concerned that an increase in the amount of unsecured consumer debt could weaken the bank balance sheet in the event of a recession. The market reaction to the announcement on Monday was uncertain.

Now let’s focus on Apple Card. Does it have enough potential to meet Tim Cook’s expectations and revolutionize the credit card market? It may be too early to answer this question, but we can start by analysing the new card more in details.

Despite the great advertising, typical of every Apple’s new product, Apple Card may not be so revolutionary, at least on paper. The credit card does not require the payment of any annual or late fees and for every cash expense the holder receives back a percentage of the purchase between 1% and 3%, depending if the payment was made using the physical card or the app. Moreover, the cash back is recorded daily.

These features, however, are not unique of Apple Card, and on the market there are other credit cards offering similar, or even better, benefits. Particularly, the main competitors are the Double Cash Card by Citigroup Inc. and the U.S. Bank Altitude Reserve Visa Infinite Card.

Apple Card holders will also pay a variable APRs, ranging from 13.24% to 24.24% based on creditworthiness, according to Apple website. Such a wide range suggests that some customers may have low credit scores.

Beside fees and refunds, Apple Card might differentiate itself from the competition in terms of security. The card is equipped with all security technologies of Apple Pay and the physical card has no numbers on it, but only the name of the holder. However, it is in terms of easiness to use that the card can really excel. In fact, the product is designed to offer its user the maximum level of transparency and control over spending. All data about transactions are displayed on the mobile app, including not just the address but the actual name of the place where the transaction occurred, and they are divided by type (e.g. food and drinks vs entertainment).
In conclusion, to enter and succeed in the credit card industry, a massive industry with fierce competition, the two companies have decided to team up and to rely on a product which seeks to innovate in terms of benefits, security and simplicity. Will this, together with Apple’s massive devices network and Goldman’s financial expertise, be enough to win at this game?
​
Alessandro Cinquegrani