Is China “building” its growth?

Economists and in particular asset managers around the world are recently puzzling their minds with the market-scary idea that China’s noteworthy growth is being fueled by an excessively booming housing market. Being China the only country boasting such a relevant growth, the remote possibility of losing even a couple of percentage points of this growth becomes one of the worst nightmares for the rest of the world.

Housing market in China seems to be highly correlated to the country’s economic growth. Empirical evidence is provided by simple stress tests, which forecast a drop of 5 percentage points from China’s GDP under the scenario of a 10 per cent drop in housing activity and home prices. The following graph clearly shows the deep connection between the real estate market and the GDP. 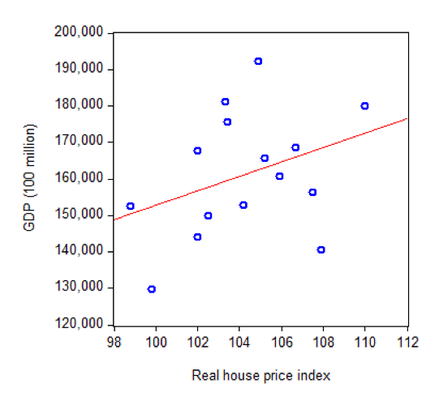 Bearing this peculiarity in mind, it becomes straightforward the sudden worrying reaction by agents throughout the world when reading the latest Financial Times estimates of 29% vacant dwellings and the need of lowering by 40% the pace of construction with the aim of matching the more reasonable US vacancy rate of  just 13%.

As history teaches us, if bubbles were so easy to be detected, they would not exist at all. Looking at the situation from another perspective, nothing really signals wild excesses. As a matter of fact, Chinese population is growing so fast that 7m new houses per year are not enough to satisfy the demand. Wall Street Journal reports that cities exhibit fewer occupied homes than there are households mainly due to poverty and unaffordability in main cities (Beijing, Shanghai and Shenzhen properties are up a third in the year to August). Hence, allegedly as long as the country grows wealthier the effect of multiple families per dwelling should progressively disappear while contributing to normalizing the vacancy rate.

Overall, the picture may look quite bewildering and from time to time, the Chinese government contributes to arising worries. Over the weekend, some agents spread rumors about 6m2 lofts in Shenzhen sold for $132,000 each. The land ministry declared the news was unreliable and guaranteed the responsible would have been severely dealt with. This behavior from the government conveys the message that economists are not the only ones fearing the bubble’s nightmare and the dreadful chain consequences in case it busted.