Is Debt Burden too heavy for China’s shoulders?

Raising capital is a vital concern to every corporation in the world. Thanks to short-term and long-term financing, a firm can fulfil its financial needs and finally achieve his goals. Even the sceptic academic world recognised the primacy of finance in business world. According to the anthropologist David Graeber, debt is the oldest mean of trade, even older than cash and barter. Despite not being exactly a positive concept in our culture, debt played a major role in world economic development.

When is it too much, though? Can the excessive weight of debt’s burden eventually crush the contractor?

Economists at major International Organizations elaborated helpful measures, which would allow us to decide when it is the right time to freeze financing inflows. A good example is the so-called “Credit Gap”.

This particular benchmark is the spread between the credit-to-GDP ratio and its long-term trend. In the past, it has proved to be a good “early warning indicator” (EWI) for banking crises as long as it is able to detect a possible divergence between present and historic borrowing time-series. Therefore, it would highlight a steep accumulation of debt. 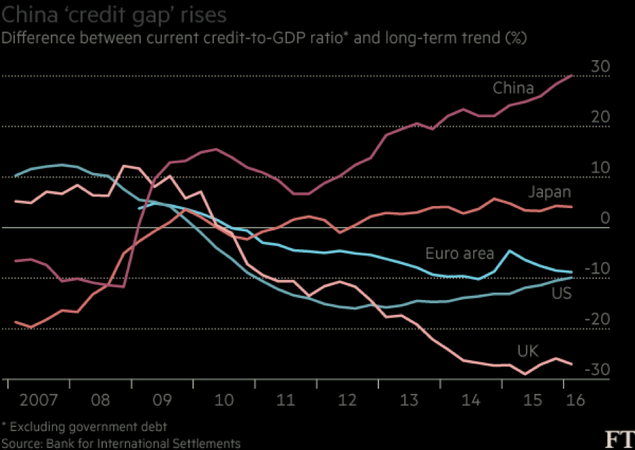 That is the case for China. Recently many economists at Bank for International Settlements raised concerns about China’s ability to repay interests and debt. Credit Gap reached 30.1% in March while the danger level is considered to be 10%. Indeed, the difficult part for corporations overloaded with liquidity is to invest the capital efficiently in a brief time. Furthermore, recently the IMF reported that some Chinese companies did not have enough EBITDA to meet interest payments. This could represent a huge risk for global financial stability. A possible solution would be to increase banks’ reserves even above the minimum requirements, as the BIS suggested. According to BIS’ economists, Chinese banking policymakers should use this statistical tool to evaluate it.

On the other hand, we cannot apply the Credit Gap indicator arbitrarily to every country. Actually, China is one of fastest growing nation in the whole world and it has not experienced any deep financial crisis. Not yet. There are some institutional factors, too. Beijing strictly controls the banking system at the very moment. China’s political and economic institutions are not the same as Europe’s or US’s. Its governance is quite different. We should be careful to make comparison between so different institutional frameworks even if indicators seem to be applicable.