The WallStreetBets saga against likes of GameStop and AMC has led to massive stock surges followed by downfalls, but it has also touched some of Europe’s most shorted stocks: from Evotec to Pearson and Nokia. While some of these moves have been led by speculation regarding hedge funds like Melvin capital exciting current European shorts, the most important question remains: can ethical short selling still be pursued?
But for now, let us quickly go through the basics:
Armed with this notion, we can easily understand that the recent actions against European stocks such as Evotec and Nokia have been highly speculative and targeted towards companies with relatively high short interest in the hope of triggering a short squeeze. In figure 1 we can see the top 10 stock with the highest interest, with the highest short interest at 19% being visibly lower than the crazy 140% short interest seen by GameStop in early January 2021. 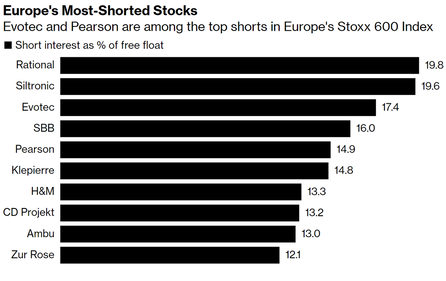 Source: Bloomberg, Markit IHS data
So, what is the future of short selling in Europe? Moving beyond the recent hype around overvalued and heavily shorted stocks, it is important to acknowledge the part played by short sellers in revealing stock frauds such as Wirecard, thus underlining the importance of short selling for the health of the financial markets. Gabriel Grego, CIO of Quintessential Capital Management, shared his beliefs in a recent Bloomberg interview. The hedge fund manager – known for shorting Akazoo (Luxemburg based audio streaming company), Folli Follie (Greek luxury retailer) and most recently Penumbra – believes that “short selling is life and kicking” if investors target companies suspected of fraud and avoid using leverage. Moreover, Mr. Grego underlined the fact that the rise to power of retail investors should not affect short plays in which the target company has engaged in fraud.

However, from a macro perspective the ECB’s set of interest rates – 0.0% for refinancing operations, 0.25% marginal lending facility and -0.5% deposit facility – creates an environment in which even the least competitive companies with the highest debt ratios can refinance their loans and continue their operations. On the same note, the EU continues to be a hard environment for short selling with EU requiring institutional investors to disclose short positions above a 0.5% of a company’s floated stock, compared with 5% in the US. Furthermore, short selling bans (such as those caused by the COVID-19 pandemic) have been common practice in European countries such as Italy, France and Spain as recently as 2020. Altogether, the higher transparency requirement, combined with lower average trading volumes, and short selling restrictions further discourage short selling in Europe.
​
In the end, however, I strongly believe that together with the rise of trading forums and increase access to financial markets for retail traders, short selling ideas, especially those aimed at uncovering frauds or unethical company behaviors, will likely gain more traction regardless of the limitations of the stock market on which the stock is being listed.