​Is Europe heading towards a new recession?

All primary index suggests that a new recession is coming. Not as strong as the last one, but it could start very soon.

More than ten years have passed since the last big global recession of 2008, and many economists say that a new recession is coming, but no one knows precisely when.
The instability of Germany directly involves all European countries and in particular, those that, like Italy, are very tied to its economy. Italy has already had a brief and slight recession between the end of 2018 and the beginning of 2019. The main problem is that many of its companies - as also in the Netherlands and Belgium - produce components for German companies and are integrated into their production cycles. 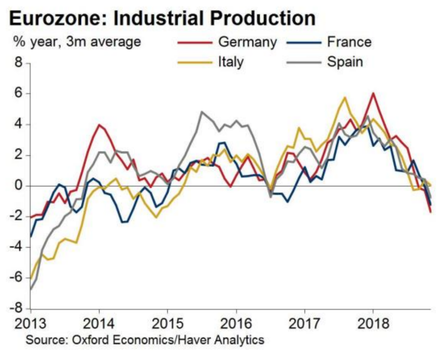 The graph above shows that the European manufacturing situation is a big issue. Germany and Italy may already be in a "technical recession." Three of Europe's biggest economies produced a horrible set of manufacturing numbers for November. Industrial production in Italy and Spain went down by 1.5% and in Germany by 1.9%.

But fears about the imminence of the recession come from almost all over the world. For instance, In the United States, the largest economy in the world, the yield curve on government bonds was reversed, one of the leading indicators of an incoming recession. It means that, unlike what happens typically, it has become more profitable, and therefore risky, to buy a short-term government bond than a long-term one: a sign that investors are worried about what will happen in the immediate future. These "yield reversals" preceded all the recessions of the last 70 years.

Other signs come from the complicated Brexit affair: if it were to end with the infamous "no deal" it could bring further problems to the economic situation of the country and the rest of Europe. The International Monetary Fund has defined the world economic situation as "delicate" and its forecasts about global growth are worrying.

To face this situation, central banks, which generally stimulate the economy in times of crisis, may decide to resort to different instruments, or at least unusual. Their traditional policies, like the manipulation of the interest rate in order to make it easier to borrow money, have already been exploited to their full potential: the rates are already close to zero, and sometimes even lower. We could, therefore, witness new "quantitative easing," or even more creative solutions.