​Is gold's price drop an opportunity for investors?

​Just a few months ago gold was at record highs, trading at more than 2000$ per ounce. Low interest rates and expectations on future inflation rise made its rally seem unstoppable. However, since August gold price has started dropping, and now the price is below 1700$. This significant drop could have created an opportunity for long-term investors. Should investors consider owning gold? If yes, how can they invest in the commodity?
To answer these questions it is very important to understand the function of gold in a portfolio and what determines its price.
​
The role of gold in a portfolio
Gold is considered a safe haven by investors; an investment whose value is expected to rise in periods of market turbulence. Many investors think that this commodity is fundamental to diversify properly a portfolio. Ray Dalio in its All Weather Portfolio allocates a share of 7.5% in gold. In 2012 the fund manager of Bridgewater Associate declared: “I think gold should be a portion of everyone’s portfolio to some degree because it diversifies the portfolio”. The hedge fund manager does not suggest being highly exposed as having a big share of the portfolio invested in gold can be dangerous. Gold is characterized by high volatility and this exposes investors to big risks.

However, Dalio’s thoughts about investing in gold are not shared by all investors. In a 1998 Harvard speech, Buffett said that it “has no utility”. According to the Oracle of Omaha, gold does not produce any cash flows and its price depends only on the belief that other investors will pay higher prices to have it.
But since gold price does not depend on financial results, what are the drivers of its price? According to Barrick Gold, the biggest gold miner in the world, the answer is: financial demand, physical demand, and fear. 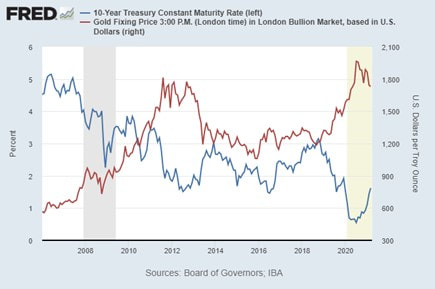 Physical demand
According to the World Gold Council, global gold demand is composed of 56% of jewelry, 24% of “ bar and coins” for investment, 14% of central banks, and 6% of general industrial needs. The main consumers worldwide are China and India, followed by the United States. As readers will have guessed the physical demand is strictly correlated to the consumption of gold in China and India. However, it must be highlighted that also central banks contribute to the demand for gold. Indeed they hold gold as a protection against hyperinflation and other economic catastrophes.
Fear
The last driver of the gold price is fear. As Buffett suggests investing in gold is like going “long on fear”. In 2012 the CEO of Berkshire Hathaway wrote: ”What motivates most gold purchasers is their belief that the ranks of the fearful will grow”. Gold is a fear asset. It performs very well in periods of strong uncertainty. This is the motivation that led gold prices to reach their record high during the coronavirus pandemic in august. Then because of economic improvements, vaccine rollouts and the decrease in uncertainty, prices started dropping.
In the last 20 years, gold price registered an increase of 576% which is remarkably higher than the S&P500 surge of 244%. Investors can earn huge returns by being exposed to gold and as Dalio suggests having a share not higher than 7.5% invested in it might be a profitable decision.

Another strategy to bet on gold
Another strategy that was revealed to be successful during these years was buying a gold miner. In particular, there is a stock that in the last 4 years registered a gain of 805%: Kirkland Lake Gold, a gold miner operating in Australia and Canada.

Kirkland Lake Gold
The company mines gold in its 4 caves: Macassa, Holt Complex, Detour, and Fosterville. In 2020 it reported revenues of 2.46$ billion and a net income of more than 787$ million. The balance sheet indicates a strong financial situation since it has no debt and registered 707$ million in cash on hand and 30$ million in receivables. The company grew at a very fast pace during the last years. Net income saw an incredible increase from 42$ million in 2016 to 787$ million.
The growth was driven mainly by a cave based in Australia: Fosterville. In this cave, the production passed from 350,230 to 640,467 ounces in the last two years. Even more, Fosterville is characterized by low costs of production and this allows it to be the mine with the biggest operating margin of the company. On the other side, Macassa production saw a decline in production in the last two years and Holt Complex saw a small production of fewer than 30.000 ounces in 2020. Last but not least, Detour was acquired in 2020, a year in which there was a production of 516.000 ounces. As seen Fosterville was the main driver of Kirkland Lake's success whose shares climbed from 3,52 in 2016 to 54 in August 2020. However, since that peak, the stock dropped more than 40%. The reason behind this is that the company 2020-2022 production forecast for Fosterville declined to 400.000 ounces per year between 2020 and 2022. The cave responsible for the stunning improvements during last years seems to have finished reserves. The acquisition of Detour was a response to this problem but investors are not certain that Detour will be able to replace Fosterville.
Studying the company’s guidance for 2021 and 2022, Detour’s estimated production will be 700,000 ounces per year, well higher than the 516,000 ounces of 2020. The production could still be improved as the company received the permit to increase annual throughput to 32.8 million tonnes per annum, assuming the company will utilize 85% of the potential production (as Kirkland Lake forecasted). This would mean more than 800,000 ounces produced per year. What scares investors are operating costs which are high compared to the ones of Fosterville. However, the company expects to cut costs of production from 1,200$ per ounce to less than 900$ per ounce in the middle term. Even more, it must be highlighted that Detour is one of the largest mines in North America and has a reserve base of more than 15 million ounces. Many see this mine as a very valuable asset, currently undervalued by the market. Detour is not the only cave expected to increase production. The company expects Macassa production to reach 425,000 ounces in 2023. It would be a considerable surge as in 2020 it was 183,000 ounces. Operating costs in this mine were 695$ per ounce in 2019, which makes Macassa a low-cost production cave.
In 2020 Kirkland Lake produced 1.369 million ounces of gold and the company has forecasted the same level of production for 2021. According to the miner, production growth at Macassa and Detour is offsetting the loss of production at Fosterville. Detour was described as the “ right acquisition at the right time” by the company. Even more, Kirkland Lake’s President Tony Makuch declared “ exploration expenditures in 2021 are estimated to be at $170-$190 million”. About $90 million are targeted for Fosterville and these expenditures are the highest since 2016. In December 2020 he added: “When you consider that we have identified a number of large mineralized systems, all including intersections containing quartz with visible gold, we remain optimistic that additional high-grade zones can be identified”. Nobody knows if the explorations will be a success, but the company showed its ability in delivering exceptional results for investors during the last years and now it has more cash than ever which could be used for further acquisitions and explorations.
After a drop of more than 40%, buying Kirkland Lake Gold could be a valuable strategy to diversify a portfolio by taking exposure to a gold-related asset.