Is Latin America ready for the inflation test?

Latin America’s economy has experienced a sharp deterioration in the second half of 2015. The trend has been mainly driven by Brazil’s path toward recession but is also due to the weak growth in previously performing countries (such as Colombia and Peru), which suffered the slowing Chinese demand for commodities and an increasing risk aversion towards emerging economies that prompted higher capital outflows and a downturn in the business and credit cycles. Currencies, therefore, have been highly under pressure starting from the end of 2015 and in these first months of 2016.

The region has already experienced the consequences of hyperinflation during the debt crisis in mid 1980s. Hyperinflation has devastating consequences for business, political systems’ stability and population. Have these countries learnt the lesson of inflation targeting?

While the world is increasingly concerned about deflation, Venezuelan official data for 2015 record an increase in the consumer price index at 181%, the highest in the world, and the IMF forecasts that it will reach as high as 720% in 2016. Prices are rising in the entire region: in Argentina inflation will rise from 27% to 23%, 10.5% in Brazil, 9.5% in Uruguay and 7.6% in Colombia.

These scenarios have different causes. In Brazil, political developments are drawing the government’s attention away from the much needed reforms and poor fundamentals. According to Edmar Bacha, an economist who worked to control hyperinflation in the 90s, the main reason for this high level of inflation is represented by price indexation, the technique to adjust income payments by means of a price index, in order to maintain the purchasing power of the public after inflation. In January 2016, Brazil raised the minimum wage by 11.6%, a move that reverberated on other wages, prices and pensions.

In Argentina and Venezuela instead, inflation is caused by the generous printing of money to finance indiscriminate subsidies. Argentina is now experiencing a wave of new economic policies implemented by the new government of Mauricio Macri, which has cut those subsidies. The economy, however, needs time to adjust to the new government’s policies. In the rest of the region, instead, inflation comes from currency depreciation, which is increasing the price of imports, as it emerges from the chart.

Current circumstances represent the first important test for inflation-targeting policies in Latin American countries. The tough external environment will make clear who has been serious about inflation and who has not. 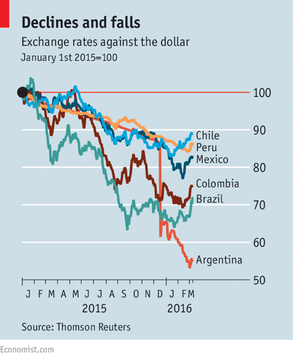