Is Papa John looking for a buyer?

​On 6th May 2019, Papa John’s founder, John Schnatter, announced that he intends to sell his stake in the company. Papa John's pizza is an American restaurant that functions in the franchise regime, the fourth largest pizza delivery restaurant chain in the US. Its headquarter is located in Jeffersontown, Kentucky, although it is present at an international level. The firm is currently making efforts to fix its public image, after being accused of using a racial slur on a media training conference call last year. Rumors are that the founder, who is also the largest shareholder at the moment, is already discussing with some financial advisors about selling the 31% of the company that he owns. He has resigned as CEO in 2017 and as Chairman in January, and has also stepped down from the board last month.

Just a few months ago, in February 2019, Starboard Value announced to invest $200 million in the company. Papa John’s issued $252.5 million Series B Preferred Stock to certain funds affiliated or managed by Starboard Value. Furthermore, the current investment firm’s CEO, Jeffrey Smith, is believed to become Chairman. Another change that the company has made goes back to March when they named the former basketball player Shaquille O'Neal as a board member, brand ambassador, and investor.

​The news that John Schnatter wants to sell came as a shook, especially after the company has just announced better-than-expected earnings during the first quarter of 2019. They reported earnings of 31 cents per share, and this way exceeding analysts’ initial expectations of 24 cents per share. Still, the numbers are worse compared to the first quarter of 2018, when it has been $0.52. Revenues are estimated to be around $398.5 over this period, surpassing the initial $374.2 million predicted. Steve Ritchie, the CEO, declared that “The first quarter was a time of promise for Papa John's. We made further progress in transforming the culture, thinking, and momentum within the company." He also added: “We have significantly strengthened and refreshed the company’s leadership, adding talented members to the senior management team and highly-qualified directors to the board this year”, highlighting the numerous changes and improvements that took place within the company. 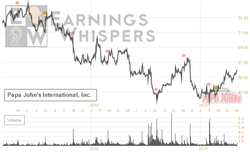 Click here to edit.
Papa John’s pizza is constantly growing, adding to its portfolio no less than 33 net unit openings driven by International operations since the beginning of 2019. Despite this, consolidated revenues decreased $51.7 million (11.5%) for Q1. Furthermore, it is reported a loss before income and taxes of $0.8 million, compared to $23.1 million for the same period in 2018. There are also other important aspects to take into consideration when analyzing the current financial situation of Papa John’s. For example, domestic company-owned restaurants operating margin decreased $3.9 million (0.6%) and franchise royalties and fees decreased $7.3 million (29.3%). However, the lower North America sales volumes were compensated by convenient commodities costs and reductions in certain operating costs, including labor. Unfortunately, the unfavorable exchange rates had a negative impact on the international operating margin, which increased with only $0.3 million because of that. Net interest expenses increased $1.2 million, mainly because of the high-interest rates, compared to Q1 in 2018. The total debt on 31 March 2019 was $380 million.
​
Operating highlights, including restated data for the first quarter of 2018:

In conclusion, even though numbers are not necessarily better in the first quarter of 2019 than in the same period of last year, Papa John’s is growing domestically and mostly internationally, and had better figures than expected up until now. However, the racial scandal from last year caused the founder and largest shareholder, John Schnatter, to have no administrative power in his company and also left him wanting to sell his stakes.