Is paying for results ready to take off in developing countries?

Overview of the first impact bond launched in Colombia

One year after the launched in Colombia of the first Social Impact Bond ever issued in developing countries, mixed finance alternatives continue to develop to address developing areas’ challenges.
The publication of the Sustainable Development Goals (SDGs) by the United Nations in 2016 has brought the world together in a mission to end poverty, fight inequality, and tackle climate change. Meanwhile, a bond market aimed at financing projects with social issues has emerged and deepened, supported by a growing number of investors who have begun to embed ESG (Environmental, Social, and Governance) standards into their investment decisions. However, the investment gap needed to reach these goals still amounts to $2.5 to $3 trillion annual. Of course, beyond finding the needed trillions of dollars, achieving these goals is no small feat. Innovative finance is trying to answer to these goals by intending to both increase resources and improve the use of existing resources. One particular form of innovative finance, payment by results, or results-based financing, seeks to create incentives to achieve critical social outcomes by only paying when results are achieved. For over a decade, multilateral and bilateral donors have used variations of these tools as a way to bring transparency to development aid, with the end goal of improving more lives.
The first initiative came from the U.K.’s Department for International Development (DFID) which established in 2003 the Global Partnership for Output-based Aid (GPOBA) as a multi-donor trust fund administered by the World Bank with the mandate of exploring output-based aid (OBA) projects across seven sectors. In addition, two other trust funds at the World Bank—focused on education and health—also use payment by results, as does the World Bank’s Program-for-Results (PforR) financing instrument. 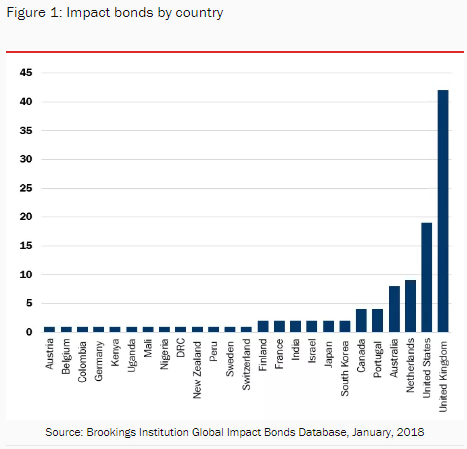 But in recent years a new form of payment by results has come to the development stage: social and development impact bonds (SIBs and DIBs). A social impact bond (SIB) is a contract with the public sector or governing authority, whereby it pays for better social outcomes in certain areas and passes on the part of the savings achieved to investors. Since repayment and return on investment are contingent upon the achievement of desired social outcomes, social impact bonds differ from traditional bonds. If the objectives are not achieved, investors receive neither a return nor repayment of principal. The risk of an unsuccessful service is thus transferred to the investor rather than the delivery organization. SIBs derive their name from the fact that their investors are typically those who are interested in not just the financial return on their investment, but also in its social impact. Indeed investors not only provide the upfront risk capital with an opportunity for return, but they also can play a critical role in helping to improve the system of service delivery by bringing private sector discipline into practices of monitoring and performance management. Donor agencies like the World Bank, DFID, U.S. Agency for International Development (USAID), and the Inter-American Development Bank (IDB) have started progressively launch these new types of bonds. The main activities funded by Social Impact Bonds are aiming to improve the sectors of criminal justice, employment, social welfare, health and education. 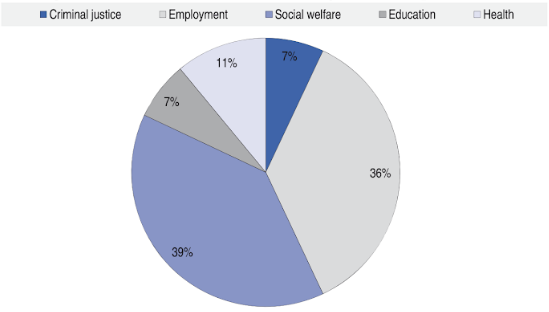 Source: Center for Public Impact, 2017
As of January 1, 2018, 108 impact bonds had been contracted across 25 countries, six of which are in developing countries. The first Social Impact Bond ever in Latin America was launched by Colombia one year ago on March 29, 2017. It resulted from the agreement between NGOs and public and private sector entities supported by international organisations. With an unemployment rate up to 11%, Colombia is facing tenacious social challenges. While young people and women are still more likely to work in the informal sector, significant wage gaps exist for Afro-Colombians and the indigenous population. These labor market inequalities have been exacerbated due to the national armed conflict leading Colombia to have the world’s largest internally displaced population. To face these issues, the project attempts to identify vulnerable populations and make them more employable. In particular, the SIB will target skills training and employment support to vulnerable, unemployed individuals between 18 and 40 years old in Bogotá, Cali, and Pereira. The total amount paid by the government will depend mainly on the number of employed individuals and the duration of the contract (from three to six months). In case the people employed retain the job more than six months, a bonus will be paid to the investors.
While two Development Impact Bonds (DIBs) have been implemented in Peru and India, a distinguishing feature of a SIB is that the outcome funder is a government entity. In this case, the Colombian Government’s Department of Social Prosperity (Prosperidad Social) will provide a portion of the outcome funds. Many other groups will also be involved on the ground. Fundación Corona will provide technical assistance while Fundación Pro Bono will bring legal advice. Fundación Bolivar Davivienda and Fundación Mario Santo Domingo will look to drive investments. The government of Switzerland will collaborate through its State Secretariat for Economic Affairs (SECO). The Inter-American Development Bank’s (IDB) Multilateral Investment Fund (MIF) is supporting various aspects of the design work. Instiglio, a global non-profit impact bond and results-based financing advisory organization, advised the design of the SIB, and Deloitte consulting will provide independent verification of the agreed upon outcome metrics. In the first year of the SIB, Prosperidad Social will repay the investors for job placement and retention of three months, up to 1 billion Colombian pesos, after which repayments will come from the IDB/MIF. In the second year, all payments will come from the IDB/MIF, up to a total of 1.2 billion pesos. The following table shows the metrics and payments of the Colombian Social Impact Bond. 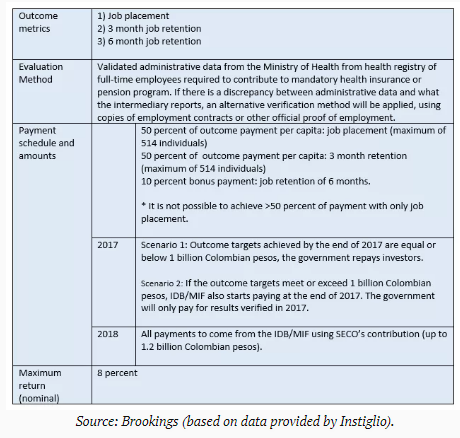 This deal appears more complex than its peers due to the involvement of the outcome funders to the design phase of the project. However, the autonomy of the service providers, as well as the risk tolerance that characterises private investors, allows and even incentivises innovation in the field of intervention. Indeed, the payment for results approach does not make payment conditional on certain activities or methods, allowing NGOs to decide for themselves how to obtain better results.
Innovative financing for development is definitely one to fill the estimated $2.5 to $3 trillion annual investment gap needed to fulfill the 17 ambitious Sustainable Development Goals (SDGs), their 169 targets, and 230 indicators of success. Among other issues, many developing nations throughout the world, are dealing with lower growth due to the end of the commodities boom, and making public resources sparse. The most vulnerable are often the worst hit by program cuts, and this financing mechanism can prove to be a win/win for both investors and the community they serve.