Is the luxury industry coronavirus-proof?

An insight into how European luxury fashion behemoths are navigating the now amid covid-19 crisis
During these recent times swathed in uncertainty, it seems extremely arduous to forecast the future of luxury fashion firms: will they weather the pandemic and leave relatively unscathed or will it be more than just a short-time blip?

The luxury fashion industry and the 2008 global crisis
The luxury fashion industry and the 2008 global crisis
Although heritage luxury brands fared better than others during the 2008 global recession – some of them (i.e. Burberry) even to the extent of managing to ramp up total revenues through strong sales –, the luxury market still deeply reeled and was ultimately upended: Chinese consumer spending was the game-changer at the time. Rapid recovery from the economic downturn stemmed from intensification in the Asian demand for 'finer things', specifically China's: by 2013 the Asian-Pacific area had overtaken Europe as the largest market for luxury goods. It's no coincidence Chinese consumption made up for 40 percent of the €281bn worth worldwide demand for luxury products last year, according to Jefferies. 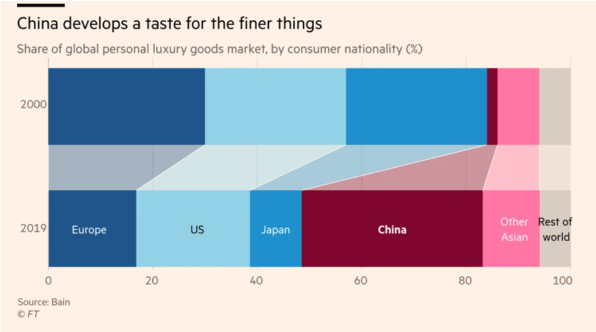 ​
Navigating the now: coronavirus ripple effects
The Chinese setback
Nonetheless, at a first glance the current outlook appears bleaker than a decade ago: the pillar of the high-end fashion sales as well as the determinant of future growth, namely China's luxury spending, has been swaying under the closedown of shopping malls and supermarkets. Alongside, due to recent travel restrictions, an important driver of high living consumption has come to a halt: the luxury industry normally beguiles to a global consumer, who has now shifted to the status of local shopper. If one reckons that 20 to 30 percent of sector revenues proceeds from purchases made outside home countries and that last year Chinese consumers traveled abroad 150million times, it is immediate to grasp the repercussions of such changeover on luxury fashion groups' income statements. Not to mention the damage brought about by the fact that China is a major manufacturing hub in terms of cotton, fabrics, and silk production.

Moreover, the virus outbreak right before Europe's top fashion shows prevented thousands of Chinese buyers to attend the February events, most of which were subsequently live-streamed (i.e. Gucci), if not canceled.

All things considered, the initial COVID-19 flare-up threatened the luxury fashion industry for the first time after 2008 through a remarkable stock dip: from January 17th to March 11th, the MSCI Europe Textiles, Apparel & Luxury Goods Index dropped by 23 percent, lopping off $152 billion in market value.

Italy’s lockdown
Yet, this was before Italian Prime Minister Giuseppe Conte instituted Italy's extensive lockdown on March 9th, 2020, thereby entailing all the Italian factories, including small, family-based façonniers temporarily shutting down their activities. In this regard, the two European luxury colossal groups, LVMH and Kering, which had not been particularly exposed given their relatively smaller reliance on China, found themselves grappling with a major gap in their supply chain production.

By the same token, the most optimistic assessment drafted by the National Chamber for Italian Fashion predicts that Italian exports will plummet by at least €100 million in the first quarter and €230 million "in the event of a prolonged crisis".

Contingency plans
Nevertheless, despite the gloomy situation, European luxury fashion firms reactively triggered a contingency plan aimed at enduring the pandemic and planning for recovery: stores close down, new protocols and measures have been pivoted to guarantee the health and safety of the employees, inventory is under revision and reallocation, product launches and advertising have been postponed and expenses minimized on a full-scale.
Furthermore, not only have these brands been intensifying digital engagement to keep up with stakeholders, but they also significantly contributed to help tackle the crisis. For instance, LVMH initiated factory production conversion, committing to supplying 40 million surgical and non-surgical masks to French hospitals. Similarly, Burberry swapped its trench for medical gowns whereas the Kering group, among others (i.e. Moncler, Armani, Bulgari, Chanel,...) made conspicuous donations to fund research and intensive-care units.

Light at the end of the tunnel?
As of now, April 2020, upbeat healing is looming on the horizon: despite the steep Q1 contractions for LVMH (-15%, €10.6 bn loss according to Morgan Stanley), which prompted the group to cut back on dividends by 30% and to trim executive pay, its finance director stated COVID-19 "would not have a lasting impact" on them and referred to positive signs coming from China, where quarantine has been lifted. The 'revenge shopping' or 'urge to splurge' phenomenon consisting of post-pandemic compulsive shopping is taking a seminal foothold and evidence is, sales at Louis Vuitton throughout the first two weeks of April have outperformed by 50% last year's record during the same period.

Another element that denotes current optimism in the European luxury fashion industry is the fact that the world's two biggest high-end groups, LVMH and Kering, withdrew from France's assistance for employees, after initially having pledged to resort to state support. Indeed, the two rivals declared they would fully pay salaries and not fall back any "partial activity" throughout the whole period of economic distress, right after Chanel and Hermès had foregone on government financial aid. Bodes well for the industry or simple competitive strategy tactics?

Conclusions
Bottom line is, coronavirus outbreak wreaked havoc on the luxury fashion industry, ranging from vacillations in demand deriving from crucial Asian markets to hitches in the supply chain stemming from Italy's fashion-and-textile production lockdown.
In the wake of the last recession, the luxury industry is better groomed to weather the crisis engendered by COVID-19, which certainly has shaken some of the foundational aspects of the sector. High-end fashion companies are now deftly applying present-oriented measures to stabilize their businesses and ensure their survival, but they should also equip to shape the new normalcy, according to a report by McKinsey and Company. In this connection, management should keep an eye on the long run and adjust to a post-virus scenario: starting by centralizing digital in the operating model, given the variance in China e-commerce user profiles before and after the pandemic, firms should then focus on anticipating shifts in consumer sentiment and behavior to recalibrate thereafter. Finally, it would be best practice to maximize the constructive return companies can obtain out of a critical situation by incentivizing the development of skills related to resilience and transformation to support core creative and innovative competencies such as design, manufacturing, and merchandising. 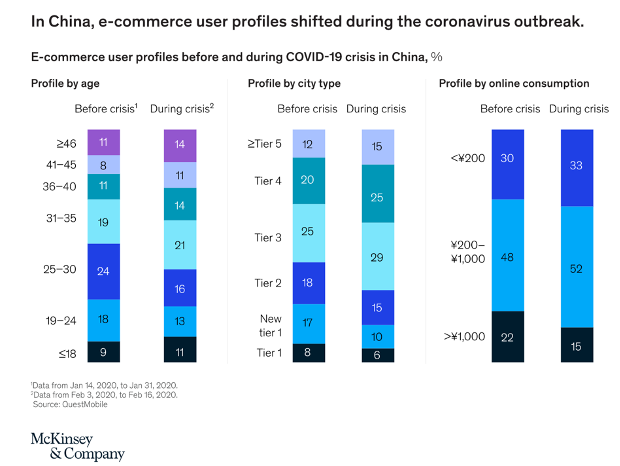