​Is the student loans market going to be the next bubble? 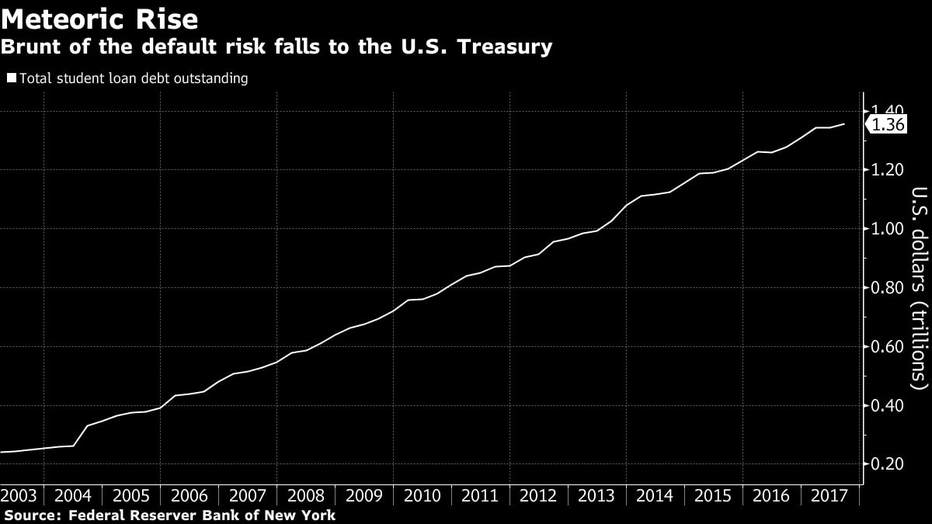 After 10 years since the housing market crash, most of the world economies look on their way to grow again. Nonetheless, the credit market has not stopped to be a reason for concern. There is a category of credit in the US, indeed, which have increased at such a pace to become second only to mortgages as a source of household debt, exceeding even credit card loans: student loans and other forms of Education related debt.

The level of student loan debt was at $346 billion in the fourth quarter of 2004, but it has ballooned to $ 1.4 trillion today, according to a study by the Consumer Finance Protection Bureau. The number of indebted students has reached the astonishing figure of 44 million with the government that usually bears the credit risk of these student loans and the responsibility for  their collection. The average debt per borrower at a public school for an undergraduate degree was estimated at over $26,000; this increases to nearly $32,000 at a private school. It increases even further to $42,000 for a Masters of Business Administration (MBA) student and $51,000 for a Masters of Science (MSC) student.

If, on the one hand, the amount of student debt seems likely to keep growing in the future; on the other, default and delinquency rates on these loans are following a similar, and even more worrying path. A report from Citi Global Perspectives & Solutions examined default and delinquency rates among student debtors, arriving at an average of about 11%, that might appear eerily reminiscent of the mortgage crisis where delinquency rates had peaked at 11.5% in 2010. What should be considered carefully, though, are the forecast for the default rates in the near future. A recent study, carried out by Brookings Institution, followed, based on data taken from the U.S. Department of Education, two groups of borrowers: those who enrolled in university in 1995-1996 and those who started in 2003-2004. The analysis revealed how default rates vary widely across different categories of debtors. In particular, the students of for-profit colleges were twice as likely to default within 12 years compared to those who entered public universities.

The main result was given by discovered trends in the default rates of the 95-96 group, which showed a constant increase between 12 to 20 years after enrollment. Extending these results to the 2004 cohort, the Institute arrived at the conclusion that almost 40 % may default on their loans by 2023.

Moreover, part of this enormous amount of debt has been securitized in recent years, with the arrival of what are now referred as SLABS (Student Loans Asset Backed Securities). The share of student loans debt that has been securitized, according to Goldman Sachs, is about $190 billion, among which $150 billion is linked to loans where repayment is guaranteed by the US government. The main problem for the long term is that, after recent changes in regulation and taking advantage of the record low interest rates of the past decade, many private companies (examples are SoFi or Commonbond) have entered into this business. The entrance of these retail private lenders has brought on the market rising quantities of these securities, which are getting investment-grade ratings from agencies as Moody’s and Standard & Poor’s. These companies state their customers are only high-class borrowers, with average credit scores of 760 and income around 140,000 $. At this point, with such a rapid growth of the market, we wonder how long it will take for it to be dominated by subprime borrowers instead of prime ones, and consequently when these bonds will start to be riskier than they appear, if they aren’t already.
In addition, from a social perspective, I would like to underline the extremely negative consequences this excessive amount of debt could have on the lives of younger generations, jeopardizing their economic future. The side effects of this phenomenon are numerous. Just to cite one, graduates who start their professional career with the burden of thousands of dollars of student loans will find more difficult to obtain other kinds of credit, mortgages for example, impairing the possibility for them to become homeowners from an early age. The role of credit as a mean to adapt consumption to the needs of these students during the different phases of their lives will be undermined, affecting significantly the level of future consumption and consequently the whole economy. It is clear, then, how this market could be the cause of many problems in the near future, requiring regulators and politicians to intervene in a timely manner to avoid systemic risks for the entire economy.