After the explosion of the Coronavirus pandemic and the March 2020 market crash, many Italian companies started trading at discounts. Many important strategic and quoted companies were the easy target of funds and foreign investors, attracted by relatively low prices for Italian most active companies. In this context, the government decided to extend the Golden Power also to many Italian private companies listed on the Milan stock exchange.

Golden Power has been introduced in 2012 by the Monti government and is defined as the power that guarantees to public authorities to intervene in market transactions that involve companies that qualify as strategic. The Golden Power basically assigns the government powers of prohibition, direction, and positioning in transactions concerning sectors such as defense and national security, as well as in some fields considered strategically relevant like the energy, transportation, and telecommunications sectors.

During the Covid-19 pandemic, this provision has been extended to many other companies that do not qualify as strategic. However, this power of the government permitted many companies to start planning the recovery for the next years without fears of hostile takeovers from foreign investors. In particular, it is interesting to analyze the position and the plans of some of the most important and strategic companies with public participation and quoted on the Milan stock exchange.

Leonardo SpA
Leonardo SpA (LDO.MI) is the Italian leading company in the aerospace, defense, and security industry and considered one of the main strategic companies, in which the Italian Treasury Minister owns a 30.2% stake. The first nine months of 2020 have been above expectations in terms of results, also considering the pandemic: revenues reached €9 bn in line with 2019, led by global orders of Vehicles, Helicopters, and Electronics in Europe.

On 06/11/2020 Leonardo plunged into the Italian stock market: regardless of the good results in terms of revenues and orders, Free Cash Flows projections are not as good as other indicators and it seems to put shadows on the capability to reach the target on Debt level at the end of the year. These fears led to a massive amount of sellings and Leonardo lost almost 8% in one day.

Leonardo SpA shares jumped again on November 10th after the company said it is considering the IPO of its American subsidiary Leonardo DRS (Defence Electronic Systems) on the New York Stock Exchange. The shares rose about 12% in Milan and the company market value reached €3.1 bn. Listing DRS could enhance Leonardo’s value since a 40% stake in the unit is valued at about $3 bn, which is worth almost as much as the entire market capitalization of the group. 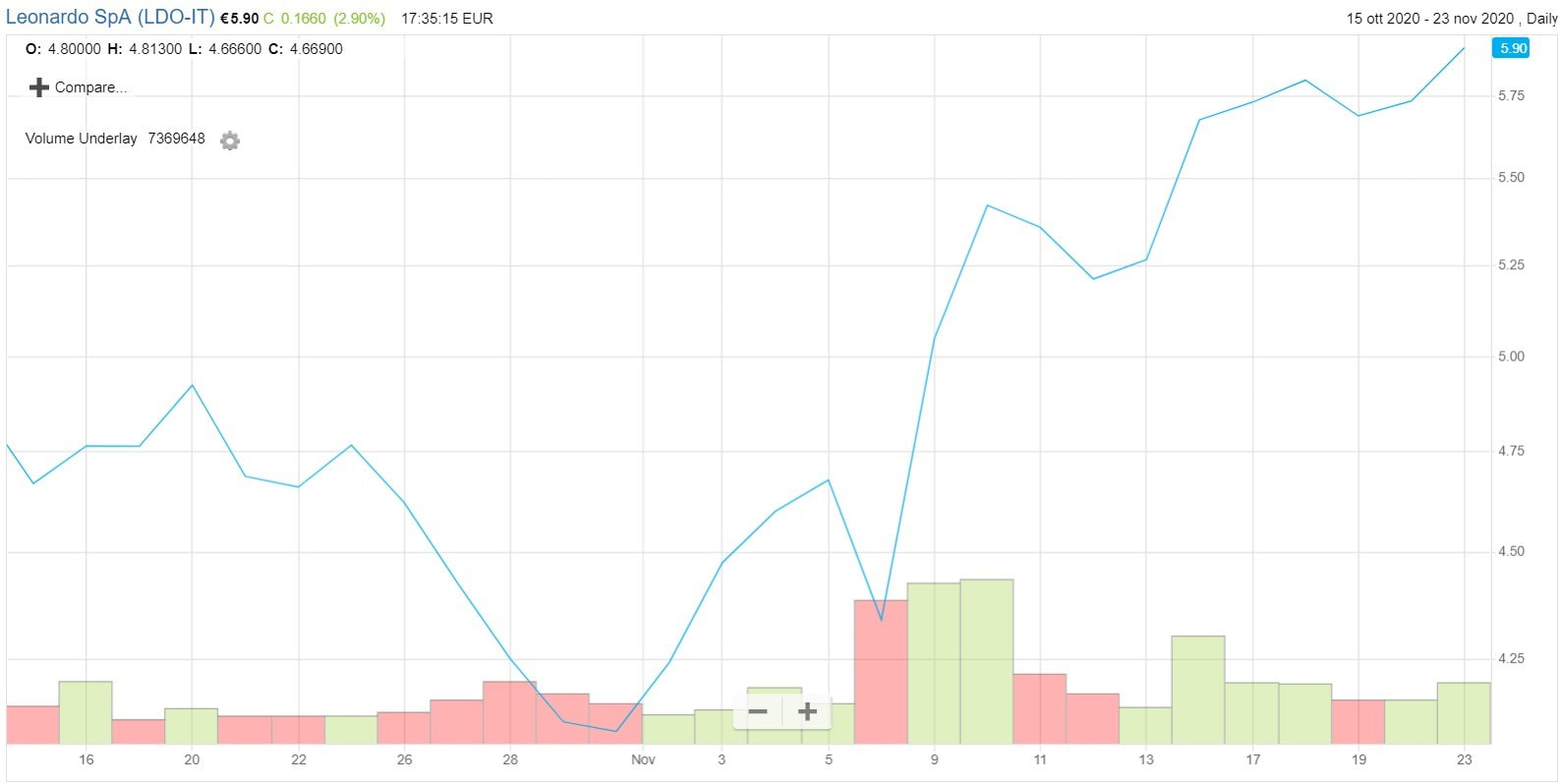 Source: FactSet
​This operation may be a potential way for the group to increase cash, given the high pressure caused by the pandemic. In fact, Leonardo reported negative Free Cash Flow from Operations: the good result in terms of orders has been put in danger by the shift of receipts caused by the health crises. Selling part of its American business could be a cash-in deal that may prevent the company to fail its debt target level, providing also new resources for further investments.

Telecom Italia SpA (TIT.MI) is the Italian major telecommunication company, quoted on the Milan Stock Exchange and with a stake of 9.81% controlled by the Italian Government through its investment vehicle Cassa Depositi e Prestiti.
TIM recently launched a plan worth almost €4.5 bn to speed up internet connection in the country, by enhancing the fiber infrastructure. The plan considers extending the internet connection to 10 million Italians and the maintenance and upgrade of the already existing infrastructure for 13 million people. The center of the plan is FiberCop, a Telecom Italia subsidiary: the project also considers the merger with the smaller competitor Open Fiber SpA, but investors seem interested in the transaction and TIM is pushing ahead trying to go beyond frictions.
This deal is crucial for Telecom Italia’s CEO Luigi Gubitosi and for the Italian Prime Minister Giuseppe Conte, who openly supported the plan considering this transaction crucial for the development of the digital infrastructure in Italy. The main private partner in this deal is the fund KKR which agreed to buy 37.5% in FiberCop for an investment worth €1.8 bn. 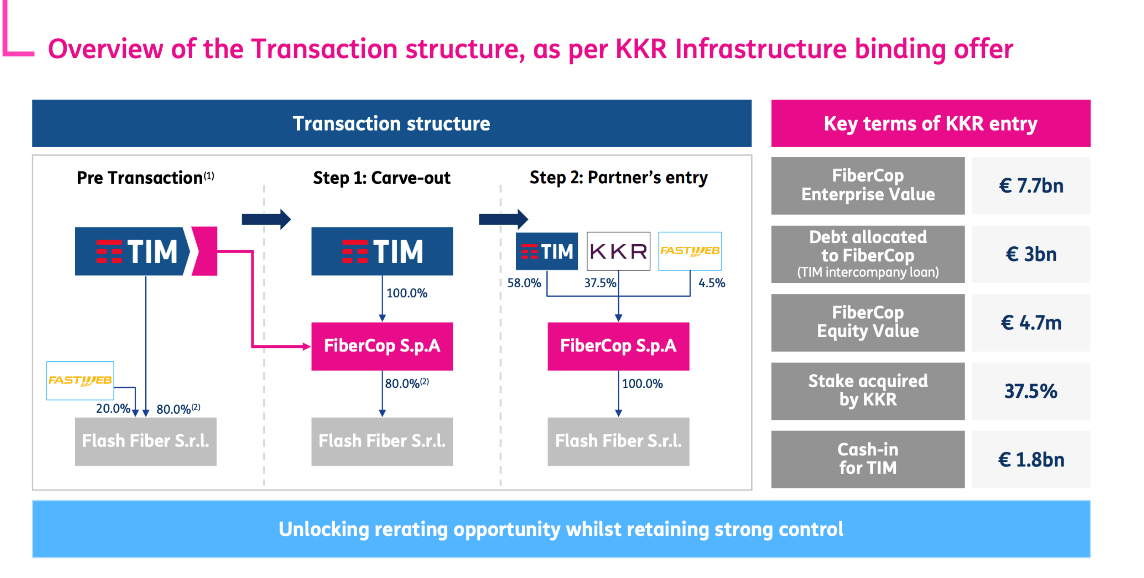 Source: Telecom Italia’s Report Q2 2020
​The most controversial part of the deal regards Open Fiber, which is currently owned by Enel and Cassa Depositi e Prestiti, where both have 50% of the shares. Until last week, many reasonings and analysis on the deal have been done considering the selling of the whole Enel’s stake to Macquarie. It seems that something is changing also due to pressures from the government and Telecom Italia’s influence: in the next week, Enel’s CEO Francesco Starace is expected to announce the role of Enel in this transaction, but recent rumors report that Enel will remain in the group with a minority of 10% and selling 40% to Macquarie. This is good news for the deal since in this way Cassa Depositi e Prestiti will take the majority with the 50% that they already own, making the negotiation with Telecom Italia easier. In fact, after the news, TIM stock price started rising sharply, demonstrating a good step further toward the conclusion.