​Over the last years, the M&A market between Italy and France has seen French companies acting as acquirers of the Italian ones for most of the times. Data retrieved from Dealogic show this fact in an unequivocal manner. Indeed, since 1996 there have been made acquisitions by French companies in Italy for a total value of €101.5 billion. Italian companies, instead, have just contributed with €52.5 billion during the same period. The total value of M&A activities between these two countries has overcome in 20 years €154 billion. Obviously, the deals’ volumes and values are not comparable with those seen in US. Indeed, just in last October, in USA, the deal making volumes hit $500 billion after GE acquisition of Baker Hughes. 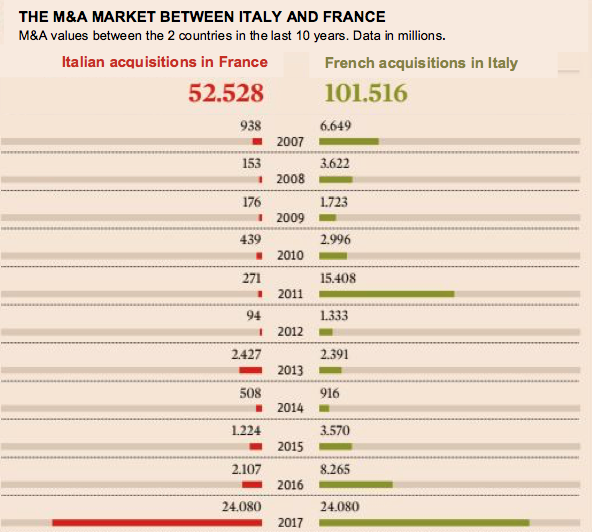 Returning to speak about the deals between Italy and France, the trend of “who was the bidder and the target” has not been the same over the years. Indeed, until 2005, Italian companies were really proactive in the M&A market, and their total volume was bigger than that of French companies. If we sum the value of the total deals undertaken by Italian firms from 1997 to 2005, we come up with a total value of €20 billion compared to €13 billion performed by French companies.
However, since 2006, year of the deals BNL - BNP Paribas and Cariparma - Credit Agricole, due to the blast of financial crisis, French companies have started playing a bigger role in the acquisition of Italian firms. The last operation Exilor - Luxottica is the last, but not the least example of this underlying trend, which shows an increasing interest of French investors in the Italian market.

​Although the deal Exilor - Luxottica may seem as an example of an Italian company, whose Italian backgrounds and bonds are ripped off by a foreign investor like many other acquisitions happened in the past; in this case we are in front of a kind of fusion slightly different. Indeed, the incoming merger of Luxottica in Exilor will see the rising of a new big player, listed in the Paris stock exchange, in which the holding of the Del Vecchio family will have the majority of capital, approximately between 31 and 38%, while the 81 years old founder will be appointed as CEO of the new firm. Moreover, Luxottica’s growth has been affected by its acquisitions outside Italy, contributing to make the company the leader in the eyeglass industry. Even the database S&P Capital IQ confirms this difference. It states that, in the last 20 years, Luxottica has invested around €5.5 billion to make acquisitions (the most important one is the acquisition of the US company Oakley in 2007 for $2.3 bn.). Therefore, as previously said, this situation is totally different from the increasing numbers of Italian firms acquired by foreigner investors who look at the Italian market as the best way to increase their return, due to the fast growth experienced by the Italian brands, and having, at the same time, really famous worldwide brands with a critical customer mass in their portfolio.

Further relevant acquisitions between the 2 countries are faded in numerous industries. For example: in the banking industry, important deals are represented by the acquisition of BNL by BNP Paribas for €10.9 billion and the acquisition of Cariparma by Credit Agricole for €4.7 billion; in the energy-industry by the deal Edison - Edf for €6.3 billion and in the dairy-industry by the deal Parmalat - Lactalis for €1 billion. More recently, the hostile takeovers undertaken by the French company Vivendi in the capital of Mediaset and Telecom have stood out from the mass. Currently, the group Vivendi, controlled by Vincent Bolloré, detains respectively the 28.8% and the 23.9% of the two firms. A total portfolio worth €4.3bn at the actual market prices. Thanks to this value, Vincent Bollorè represents the third French investor on the Milan Stock Exchange, behind BPCE, whose portfolio is worth €5.3 billion and Lactalis, with a portfolio of €4.9 billion.

From a recent data elaboration made by “Il Sole 24 Ore”, the current total value of participations owned by French investors in stocks listed on the Milan Stock Exchange is worth €37 billion, approximately 7% of the Italian Stock Exchange capitalization. Despite French investors show a strong presence and a compelling activism in Italy, Italian investors do not reply with the same energy, being reluctant to undertake takeovers in the French territory. Indeed, if we calculate the total value of participations in the hands of Italian investors in the French Stock Exchange, we come up with a value of €19.6 billion, which represents just the 0.9% of the Paris Stock Exchange capitalization.