​Japan Post and Rakuten: a joint effort to escape a downward spiral

​Rakuten Inc’s shares surged up 24% on March 15th after it announced plans to raise $2.2 billion through stake sales with Chinese tech behemoth Tencent, Japan Post Holdings and Walmart in its latest attempt to fend off competition from Amazon.

Japan Post will spend ¥150bn (=$1.4bn) to buy a stake of 8.32% consisting of both newly issued and pre-existing shares in Rakuten. WeChat controller company Tencent will instead acquire a 3.6% share in the Japanese e-commerce firm and US retailer Walmart giant will take a smaller piece of the pie (0.9%).

Shares of Rakuten and Japan Post skyrocketed as their pre-existing partnership on logistics, payment processes and telecom suddenly became ever more promising. A simple business cooperation created in the past two years has transformed into a tangible alliance with this impressive round of capital tie-ups.

Rakuten’s share gain between the closing of the stock market on Friday the 12th (day of the announcement) and Monday was close to 30%, with daily highs of around 1550 yen. This rise bust the roof of the firm’s market cap, taking it to 2.1 trillion yen ($19.4 billion).
Source: YahooFinance – Japan Post’s (left) and Rakuten’s (right) stock soar after deal announcement

The InvestorJapan Post Holdings is a publicly traded conglomerate, listed since 2015 on the Tokyo Stock Exchange. It provides postal services and logistics but also operates an insurance business and a private bank. In its 145-year history, it has been mostly government-owned, but a plan of privatization was put in place starting in 2007 that ended with the triple IPO (JP Holdings, JP Bank, and JP Insurance) of 2015.

The most noteworthy event of its recent history is the controversial $5bn acquisition of Toll Group, an Australian logistics operator. This purchase was supposed to propel JP’s expansion into global markets and allow it to compete with western household industry names such as UPS and FedEx. Nearly 6 years later, Japan Post is looking into the possibility of selling Toll, probably at a disposal loss according to company insiders, after already writing down a staggering $3.8bn of the original investment between 2016 and 2017.

In spite of this failure, ambition for primacy in local and international logistics coupled with the disappointing results of both its insurance and banking branches, has driven top executives to invest in Rakuten.

“We thought long and hard about risk and return before deciding on this investment,” Japan Post CEO Hiroya Masuda. “We believe that going beyond a business arrangement to a capital tie-up will take this partnership to a new level.” 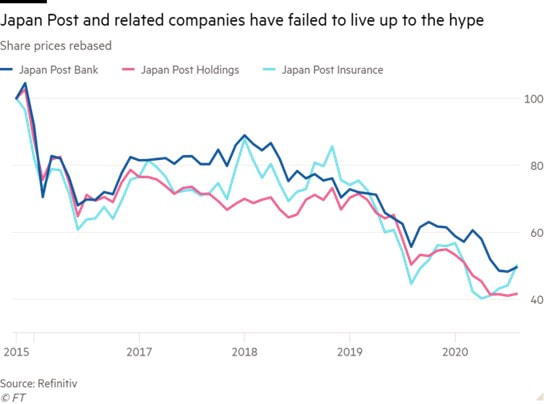 The InvesteeRakuten Inc. was born in 1997 as the brainchild of visionary ex-banker Hiroshi Mikitani. As one of the very first players in Asian e-commerce, it was an immediate success. After its IPO in 2000, the group rapidly expanded and today offers a variety of services both in Japan and abroad. Its operations divide into online retail, fintech and the latest set of telecom services. The latter have stunted the conglomerate’s earnings and valuations in the recent past: the unit lost a stunning $2.1bn in 2020, leading to an overall negative net income of $1.1bn. Unfortunately, before taking on the three largest carriers in Japan, analysts predict yet another 2/3 years of outrageous costs in this sector as the firm builds its telecommunications infrastructure. The deal’s capital inflow will give Rakuten’s bleeding financials some support while lightening a D/E ratio that reached 396% in 2020.

Furthermore, even though Rakuten enjoyed the explosion in its core online shopping business due to the restrictions caused by the pandemic, it is still struggling to keep up with rival Amazon. In fact, even though the Japanese firm was an early pioneer of e-commerce, in recent years the US tech giant gained a solid market share thanks to its impressive geographical coverage (80% of Japan’s population) and to its improved time efficiency and customer service policies. Eventually, it ended up overtaking Rakuten as the country’s largest online shopping platform.

Strategic alliance“The alliance (with Japan Post) will focus on e-commerce first, where having access to JP’s network will be a crucial advantage,” said Mikitani in Tokyo at the announcement of the deal.
Rakuten’s CEO believes that his company could benefit from Japan Post’s expertise in delivery/pick-up logistics and its deep access into Japanese households thanks to over 24,000 post offices nationwide. Such an effort to improve the timing of deliveries and operations was undertaken in-house already in 2019 but had to be abandoned due to both regulatory inspections and complaints from sellers, who would have born much of the increased efficiency cost. Furthermore, the incorporation of Rakuten’s customer base of over 100 million members, its cutting-edge online services and data centers into JP’s operations will likely result in a win-win situation, as investor’s confidence in the deal shows.

Nevertheless, the joint plan goes well beyond logistics. Mikitani has already announced that citizens will be able to sign up for and enjoy Rakuten’s vast array of services at their local post office. Other details on possible synergies in the electronic payment and insurance businesses are expected in the coming months.

Affiliations with other investors Tencent and Walmart also bring about a range of growth opportunities. The former internet giant, parent company of WeChat IM platform, can provide Rakuten with an entry route into the yet unexplored Chinese market, mainly concerning the gaming and telecom sectors. However, collaboration with the American retailer has been more than three years in the making, with the two firms already partnering in fresh-produce delivery and online retail operations.

Investors must still be cautious. Rakuten shares are up 140% in the past year, pushing its EV to more than 20 times EBITDA. Given its costly ventures, mobile unit losses set to widen, and fierce competition that will keep margins to a minimum, investor’s anticipation of earnings may very well be disappointed in the short run. 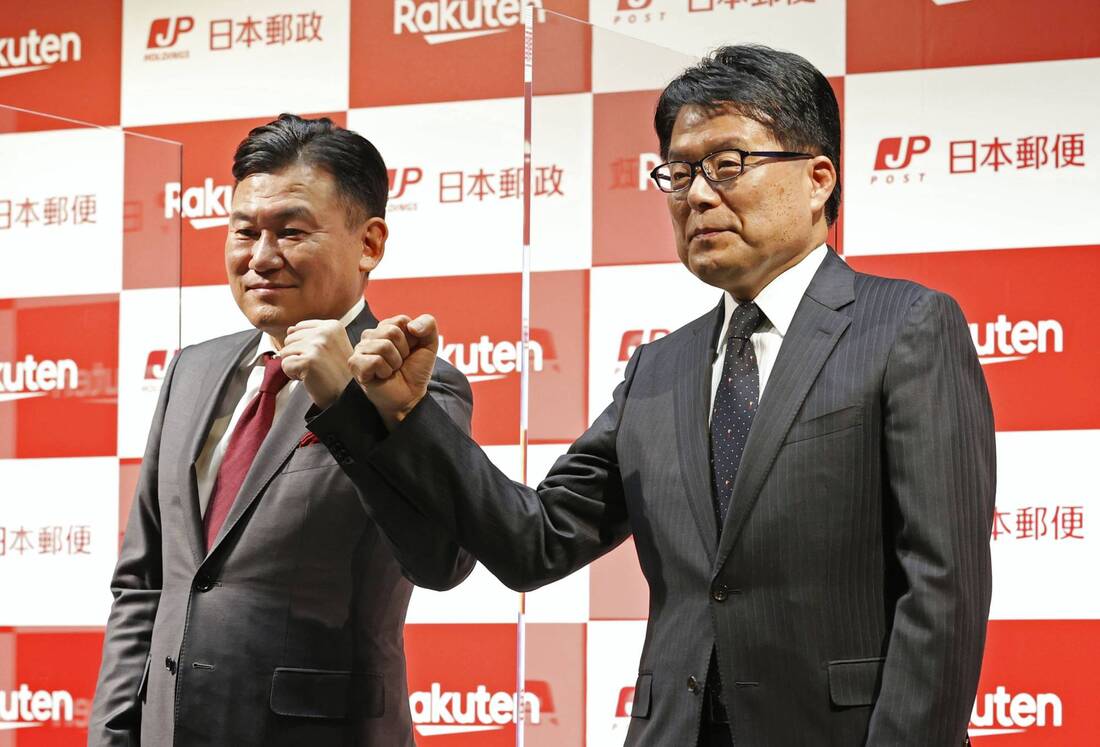